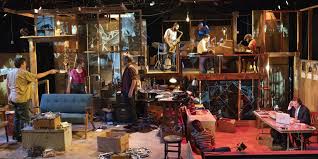 The first act is an extremely long 1:30 minutes. The second act almost an hour. Jaymes Jorsling’s (A)loft Modulation, is well directed by Christopher McElroen, well acted and terribly written. The set by Troy Houric is cleverly designed to re-creation the real Jazz Loft, housed at 821 6th Ave in the late 50s and early ’60s. This was a place where junkies, prostitutes, musicians and artists gathered to drink, get high and create. Becky Heisler McCarthy’s, mood lighting sets the seedy tone. This is the home of Myth Williams (P.J. Sosko) aka W. Eugene Smith who lived and video taped by reel to reel the comings and goings of in the loft. Upstairs jazz legends like Charles Mingus, Thelonious Monk, and Sonny Rollins jammed and hung out late into the night, thanks to upstairs neighbor, Juilliard music teacher Way Tonniver (Eric T. Miller).

As we met the manic and obsessed Myth in the 50’s, we are also in present time meeting an obsessed Steve Samuels aka Sam Stephenson (Kevin Cristaldi), who thanks to his wife (Julia Watt), has found thousands of photographs and hours of audio in the now abandoned loft. He has quit his job and is spending their money in order to preserve what he sees as relevant. As Steve discovers the past, we live it, as if it were happening now.

Myth fights with Life Magazine as Chip (Spence Hamp) hooks up with Skyar (Christina Toth ) a prostitute and does crack with drummer extraordinaire Reggie Sweets (Elisha Lawson). All are headed for some form of destruction, as they ache to connect, create and be relevant. Beat cop (Buzz Roddy) plays both father and son, as he discovers the mystery, that nobody will care about.

The problem here is everyone is one-dimensional and we never feel or relate. Three hours of this. The whole piece becomes as if it is the white noise in our head and as disjointed and esoteric as jazz can sometimes get.

P.J. Sosko, Elisha Lawson, Spencer Hamp, Christina Toth all make us want to see more of them, but in a piece that gives them more to do than fade into the past.

Suzanna BowlingJanuary 13, 2022
Read More
Scroll for more
Tap
Chicken Soup for the Soul is Coming to the Stage!
Arena Stage’s “Right to be Forgotten” Star John Austin Talks About Not Judging a Book by Its Cover, Digitally.