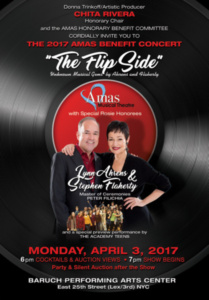 On Monday, April 3rd Amas Musical Theatre will be celebrating its 48th year at the Baruch Performing Arts Center. A evening to benefit their award-winning theatre and education programs will take place in a concert called “The Flip Side” – The Unknown Songs of Ahrens and Flaherty. 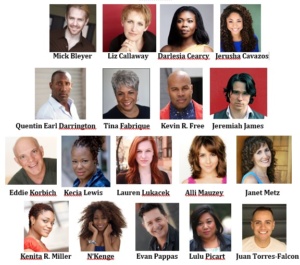 Lynn Ahrens and Stephen Flaherty won the Tony Award, Drama Desk and Outer Critics Circle Awards and received two Grammy nominations for their score of the Broadway musical Ragtime. For the songs and score of Twentieth Century Fox’s animated feature film Anastasia, soon to open on Broadway, they have already garnered two Academy Award nominations and two Golden Globe nominations. They are recipients of the 2014 Oscar Hammerstein Award for Lifetime Achievement, and in 2015 were inducted into the Theater Hall of Fame. Their mutual theatre credits include Seussical (Grammy nomination, now one of the most frequently-performed shows in America), Once on this Island (eight Tony nominations, London’s Olivier Award for Best Musical), My Favorite Year, A Man of No Importance (Best Musical, 2003 Outer Critics Circle Award), Chita Rivera: The Dancer’s Life, Dessa Rose, Lucky Stiff, The Glorious Ones, Rocky, and Little Dancer. (2014 world premiere, Kennedy Center). They have been collaborators for more than thirty years. They are Council members of the Dramatists Guild of America, and co-founders of the Dramatists Guild Fellows Program for Emerging Writers.

For their work they are being honored with The Rosie Award, which commemorates the life work of Amas Founder Rosetta LeNoire. The award honors breakthrough theatrical artists whose extraordinary career accomplishments have helped build bridges that unite our communities and bring our world more closely together.
Amas Musical Theatre has been a pioneer in diversity and multiculturalism in the performing arts since it was founded in 1968 by visionary actress and producer Rosetta LeNoire. Amas (“you love” in Latin) is devoted to the creation, development and professional production of new American musicals through the celebration of diversity and minority perspectives, the emergence of new artistic talent, and the training of underserved young people.
Tickets are $500 and $250, plus a limited number of show-only $150 seats available, and can be purchased online at www.amasmusical.org, or by calling (212) 563-2565. More information at www.amasmusical.org.
We leave you with our favorite Ahrens and Flaherty song. Enjoy!
Related ItemsAmas Musical TheatreAnastasiaChita RiveraDiversityLiz CallawayLynn Ahrensmulticulturalism iNewPeter FilicQuentin Earl DarringtonStephen Flaherty
Events