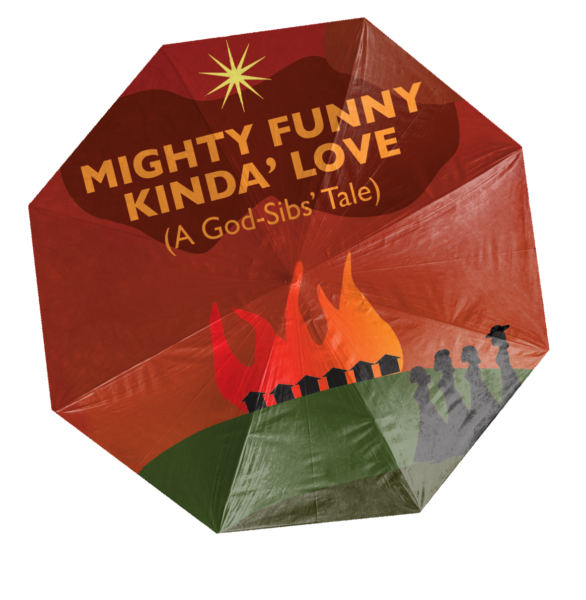 In Mighty Funny Kinda’ Love, inspired by the Langston Hughes poem “Mother to Son,” when forbidden love and racial tensions take over a small town, eight women are made to confront their fears from the past, as they give birth to a new vision for the future.

“We are excited to be presenting this original work that explores a potentially explosive event in 1958 in a community divided and defined by race as it is experienced by eight upstanding African-American women,” says Artistic Producer Donna Trinkoff. “The show speaks to the ongoing conversation of race relations in this country and features a complex and multifaceted score that incorporates different musical language as befits the different characters in the play.”

Tickets are FREE, however reservations are required and may be obtained here. For more information, please call (212) 563-2565.

Nedra Dixon (Book) is a theatre artist–a “triple threat” performer–actor/singer/dancer, and director/choreographer can be added to that “threat”. She has received critical acclaim in venues from Broadway and Off-Broadway, National tours, and regional theatres with credits ranging fromBubblin’ Brown Sugar, Tintypes, Hair, Jesus Christ Superstar, Godspell, Pride and Prejudice, Lady Day at Emerson’s Bar & Grill, Into the Woods, Thoroughly Modern Millie, Oklahoma, Annie, Children of Eden, Anything Goes, And the World Goes ‘Round, Jerry’s Girls, Little Shop of Horrors, The King and I, Man of La Manch a, Songs for A New World, A Midsummer Night’s Dream, to name just a few. She has shared the stage with such eclectic artists as Kristin Chenoweth and Mikhail Baryshnikov to Meat Loaf and has worked with noted theatre industry powerhouses including Stephen Schwartz, John Caird, Susan Stroman, Jerry Zaks, Richardo Khan, Luther Henderson and Charles Strouse and Lee Adams.

Director/choreographer credits include: In the Heights, Once on this Island, Grey Gardens, Sophisticated Ladies, Children of Eden and Beehive. She has performed twice at the White House during the Ford Administration and at the Kennedy Center when Eubie Blake was celebrated for his life-long contributions to the world of music. Currently living in Kansas City, she is very active in its vibrant arts scene. And in certainly an unexpected turn, Ms. Dixon is featured in popular rapper, Tech N9ne’s Hip-Hop music video, Fear, which has been viewed over 2.6 million times on YouTube. For five years, Ms. Dixon served as “Featured Vocalist/Co-Host” on Kansas City’s NPRaffiliated jazz show, 12th STREET JUMP. As an artist who is ever-curious and ever-evolving, Nedra is thrilled, humbled and honored to partner with her colleague and very dear friend, Pamela Baskin-Watson, on this new project, Mighty F unny Kinda Love: A God • Sib’s Allegory . “I believe in the tremendous “possibilities” of this artistic venture and look forward to this journey with great excitement and anticipation”.

Elmore James ( Director ) is a theater director, musical theatre performer, and opera singer, having worked both in the United States and in Europe. He is a veteran of Broadway and has performed at the Metropolitan Opera House, as well as the opera houses and concert halls of Italy, Germany, France, Switzerland, Poland, Romania, and Scandinavia. He has directed in various regional theaters, as well as Off-Broadway, at the Kennedy Center, and at the Mynt Teatern in Stockholm, Sweden. He was also resident director at the Urban Arts Theater in New York City, which was the home of many great Broadway hit musicals directed by Vinnette Carroll, whom he assisted both on and Off-Broadway. He was trained at the High School of Performing Arts, SUNY Purchase, the Juilliard School, and for many years was under the mentorship of the great Broadway director and co-founder of The Actors Studio, Robert Lewis. His awards include the John F. Kennedy Director’s Award, presented to him by the School of Performing Arts and the Award for Excellence in the Arts, presented to him by the National Society of Arts and Letters at the Kennedy Center in Washington, DC.

Richard Ainsworth Cummings (Music Director) is the eldest of five musical sons Richard Ainsworth, Bryan Wayne, Kevin Darnley, Terrance William and Gary Scott born to Ruby (née Campbell) and Richard Cummings Sr. At the age of five years, he was given his first piano and music theory lessons by his grandmother, God rest her, Maude Bascome Cummings Taylor, renowned piano teacher and organist/choirmaster of Cornerstone Baptist Church in Brooklyn. After four years of lessons, he entered New York’s, Juilliard Preparatory School of Music where he studied piano for four years under the steadfast Russian pianist, Anna Shenderoff. In addition to the study of western European classics, he also became well versed in the many other ethnic musical forms into which he found himself daily immersed. Before the end of his teenage years, his musical styles also reflected Jazz of the 50’s and 60’s, Rhythm & Blues and Soul music, inspirational church choirs and the gripping rhythms of the Caribbean Islands, Cuba and South America. In 1973, after majoring in piano and composition at the University of Detroit Marygrove College he began his professional music career with various local groups, experimental rehearsal bands and eclectic tribal orchestras in New York City and along the U.S. east coast. Since then, his talents have been visited upon such luminous artists as: Noel Pointer, Jon Lucien, Harry Belafonte, Letta Mbulu, Dianne Reeves, Hugh Masekela, Wayne Shorter, Zubin Mehta, George C. Wolfe, Melvin Van Peebles and a host of other wonderful performers.

Amas Musical Theatre (Donna Trinkoff, Artistic Producer) now in its 51st year of continuous operation is New York City’s award-winning pioneer in diversity and multi-ethnic casting in the performing arts since 1968. Amas (“you love” in Latin) is devoted to the creation, development and professional production of new American musicals through the celebration of diversity and minority perspectives, the emergence of new artistic talent, and the training and encouragement of underserved young people in the New York area. In recent years, Amas has emerged as a leading not-for-profit laboratory for new musicals, the most recent being Broadway and the Bard, starring Len Cariou and Red Eye of Love, which was awarded the Joseph A. Callaway Award for Outstanding Choreography. Its production of The Other Josh Cohen received six 2013 Drama Desk nominations including Outstanding Musical, a 2013 Lucille Lortel nomination for Outstanding Musical, and a 2013 Off-Broadway Alliance nomination for Best New Musical. Other shows that Amas has developed include A Taste of Chocolate, Triassic Parq, The Countess of Storyville, Distant Thunder, Marry Harry, Me and Miss Monroe, Aesop & Company, Signs of Life, Wanda’s World, Shout! The Mod Musical, Lone Star Love, From My Hometown, Zanna, Don’t!, 4 Guys Named Jose and Stormy Weather: Reimagining Lena Horne. Amas education programs include the Rosetta LeNoire Musical Theatre Academy, Lens on Live Theatre and in-school theatre arts residencies designed in partnership with elementary, middle, and high schools.

Sam McKelton, Into the Deep Productions was formed in 2015 with the determination to create and produce art that entertains, transforms, and seeks to elevate our history and existence. “You can’t catch the big fish casting your line near the shore. Launch out into the deep, child!” My mom would say this to me whenever there was some big idea I had in mind but was a little reticent about going after it. I heard her and, here we are. It’s been the way I’ve lived my life and it’s the thing that drives the engine here at Into the Deep Productions. We seek to be bold story tellers, deep diving to seek out stories that work to transform the way we live our lives with each other. We believe that life can be beautiful for everyone, if only we could come to truly see the other as ourselves. Mighty Funny Kinda’ Love (A God-sibs’ Tale) marks our first full-scaled production effort on our journey, and we are thrilled to collaborate with writers, Pamela Baskin-Watson and Nedra Dixon on this their first effort, and to have the extraordinary vision of director, Elmore James to guide us through.

Suzanna BowlingNovember 19, 2022
Read More
Scroll for more
Tap
Get Ready For Michael Jackson on Broadway
Get Ready To Rock With Janis….Joplin