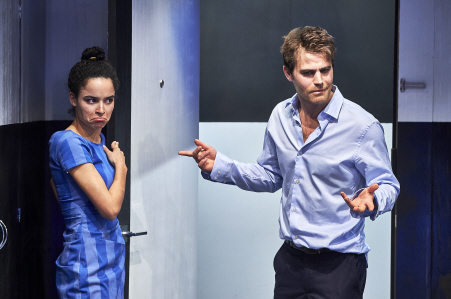 Amelia Roper’s Zürich Touches on the Moments We Have Left

Amelia Roper’s Zürich Touches on the Moments We Have Left

Amelia Roper’s Zürich takes place in a luxury hotel in Switzerland in identical rooms. Watching through a pane of glass, it’s as if we are voyeuristically spying on five sets of inhabitants, who each play a part in the final outcome. Each scene ends with a gunshot, a blackout, and the sound of an explosion until we begin to realize this is all happening at once. 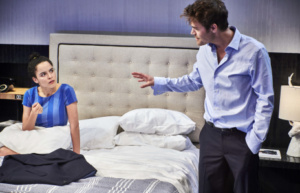 We first meet a handsome, self-involved banker (Paul Wesley) who refuses to leave the room of the woman (Juliana Canfield) he has just had a drunken one-night stand with. He believes this room is his and she just wants him to leave. He seems to have misplaced a lot of things, including his luggage. Mr. Wesley’s hysterical portrayal makes this scene hum, and Ms. Canfield is his perfect match. 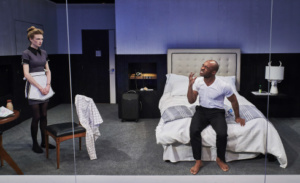 Next, an African-American man (Austin Smith) is being disturbed by the maid (Carolyn Holding) he has summoned to clean his bathroom, but what he really needs is someone to take out his frustrations on. The maid is just as needy and as miserable as he is, if not more so. He is trying to come to grips with his promotion by his unethical employers, but he is just as slimy as they are in his own way. Ms. Holding is a gem as the maid and holds her own against the devious Smith. 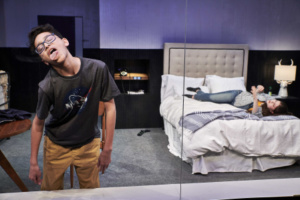 Turning the tables, a 13-year-old (Samantha Cutler) is babysitting her obnoxious 11-year-old brother (Gregory Diaz IV). Rooting through their parent’s luggage, they find a gun. 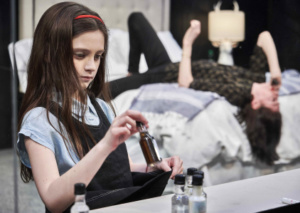 In another room, a German-Jewish woman (Renata Friedman) is trying to find out where the contents of her grandmother’s bank account have gone. Her Grandmother was killed by the Nazi’s and it seems that a Swiss bank has confiscated other accounts of this kind while trying to skirt the issue. In the meantime, her daughter (Sami Molly Bray) is bored to death. 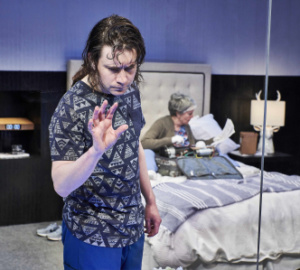 Finally, a retirement-home escapee (Lynne Lipton) and her orderly (Matthew Stadelmann), bitter at their economic circumstances, plan to blow up the lot.

Produced by Colt Coeur and New York Theatre Workshop and directed by Colt Coeur’s artistic director Adrienne Campbell-Holt, this show keeps at a steady pace as we explore the last moments of 10 lives. In a world deep into global crisis, is there really any neutrality? Amelia Roper’s smart dialogue matched with winning performances makes Zürich a stand out.

Suzanna BowlingJune 23, 2022
Read More
Scroll for more
Tap
Not So Hot: Summer the Donna Summer Musical
He Says: A Gorgeous Carousel Ride with a Beautiful My Fair Lady