American Moor A Vision of Othello 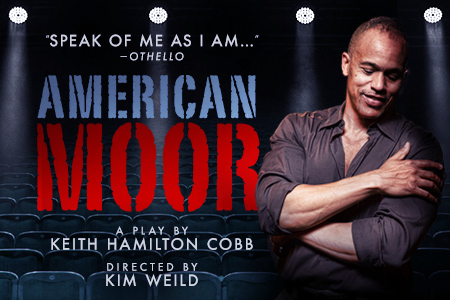 American Moor A Vision of Othello

Othello, was written in 1603, by a privileged white man, yet Keith Hamilton Cobb, knows who this man is.

According to the Webster’s dictionary an actor is an a participant in an action or process. A director is a person who supervises actors in productions. In other words the person in charge of the vision of a production.

Keith Hamilton Cobb has a presence that is undeniable. He is well built, handsome, commanding with a well rounded voice. He is liked a caged man, full of rage, frustration, arrogance and sardonic humor as he stalks the stage. He is auditioning for the role of Othello, in the new play he has self written American Moor.

According to Cobb the other African-American men who have auditioned are not worthy of the role and he and only he knows who Othello is. As the audition unfolds, we hear his internal dialogue that is fraught with inequality and his frustration at not getting seen for roles like Hamlet, Romeo and Richard II. Cobb explains the depth and complexity of Othello. His feeling is that Othello’s struggles hold 400 years of Black men being feared, misunderstood and stereotyped. Cobb directly identifies with the misinterpretations of this character and resents “Mr. Director Man“ (Josh Tyson), when he asks him his height. When “Mr. Director Man“ asks him to play the scene a certain way, he fights back and calls the director names in his head, stating what does this “white man” know about this role. Why is this theatre doing this play? They know nothing about him? He is in essence fighting for his artistic existence on earth, fighting for his career. He has put his life in the directors hands by auditioning and in our by telling his story.

By the end of the play the director says to Mr. Cobb’s “You have some great idea’s”, but instead of seeing a break-through, Cobb’s gets even more angry, so there can never be a resolution that will end favorably.

Shakespeare, from what I have seen has had a lot of color-blind casting, especially at The Public. In any audition, you put yourself on the line. Why not become the writer, that way your vision will be seen and that is exactly what has happened at The Cherry Lane Theatre.