Amerike — The Golden Land; A Soundtrack for Immigration

Amerike — The Golden Land; A Soundtrack for Immigration

With Amerike—The Golden Land, you are struck by three things. One, how timely this piece is; two, what amazing voices this company has; and three, there is an agenda here. Done in Yiddish with English subtitles, we follow the immigration of the Russian Jews to the United States from the 1890s through World War II. 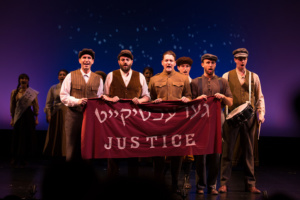 Much like today, in the 1880s, before the start of World War I, approximately two million Eastern European Jews fled their homelands in search of the streets “paved with gold”. They were poor, did not speak the language, and were desperate with unrealistic expectations. They did not realize that once they reached the shores of the US, they would then have to go to Ellis Island to be processed. More than 12 million immigrants were processed here, sometimes, over 10,000 people a day, where only 2% were turned away. They were separated and then marked due to their health conditions. All this makes sense when put into perspective. Once assimilated, work in a country where you did not speak the language was tough to come by. In the case of the Jews who landed here, they settled on the Lower East Side in overcrowded tenements. They were exploited and what Amerike—The Golden Land did not really explain, was the immigrants were exploited by their own people. They were paid pennies and the working conditions were horrific. But in the end, this did become the land where the immigrants who sought refuge became free and prospered. 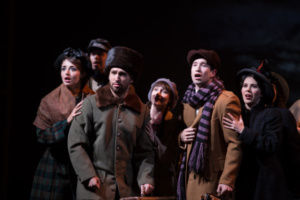 Amerike—The Golden Land starts with a groups arrival, and them settling in NYC and keeping with their tradition Shabbos. Looking and finding work, becoming a citizen, and moving into a better income bracket where Yiddish theatre was born to entertain, followed. Film and radio started as the depression hit and the Yiddish Theatre benefits helped to begin a renewal. This is done with 41 song and dance numbers, offering a window into the past. 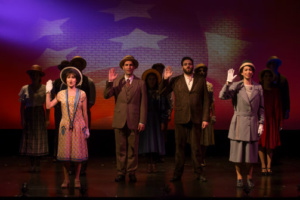 The direction by Bryna Wasserman and movement by Merette Muenter were well done and moved this show at a clip. Costumes by Izzy Fields, lighting by Yael Lubetzky and scenic/projection design by Jason Lee Courson were first-rate. As was the orchestra under the direction of Zalmen Mlotek and the Klezmer music at the end.

Moishe Rosenfeld and Zalmen Mlotek’s script compacts too many things into 90 minutes and seems to condemn America for some of the treatment felt by the immigrants who came here unprepared. They also missed an important factor: these immigrants wanted to be Americans. Once here, they learned the language, became contributors to some of the most important aspects of this country, and integrated themselves into what makes this country great. 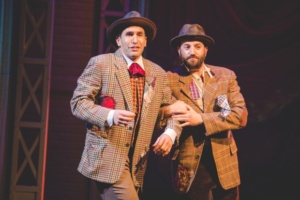 What is powerful are the songs, which seem to be a juke box of songs from the period. A delightful “Watch Your Step” explored the weaving and dodging the immigrants had to do to survive. The 146 women who died in the Triangle Shirtwaist Factory fire are remembered in “Bread and Roses”. I absolutely loved “In A Kleyn Shtibele” from the early Yiddish Theatre days. “Brother, Can You Spare a Dime?” remembered the Depression era. But Irving Berlin’s “Give Me Your Tired Your Poor” is heartbreaking when you know how many people are still reaching for this same goal.

Amerike—The Golden Land plays at The Museum of Jewish Heritage, 36 Battery Place, until August 20 when they have to close after several extensions. Performances are Mondays at 7:30 pm, Wednesdays at 2 pm, Thursdays at 2 pm and 7:30 pm, as well as Sundays at 2 pm and 6 pm.