AmfAR Streams with Grace and Power: The Great Work Begins: Scenes from Angels in America 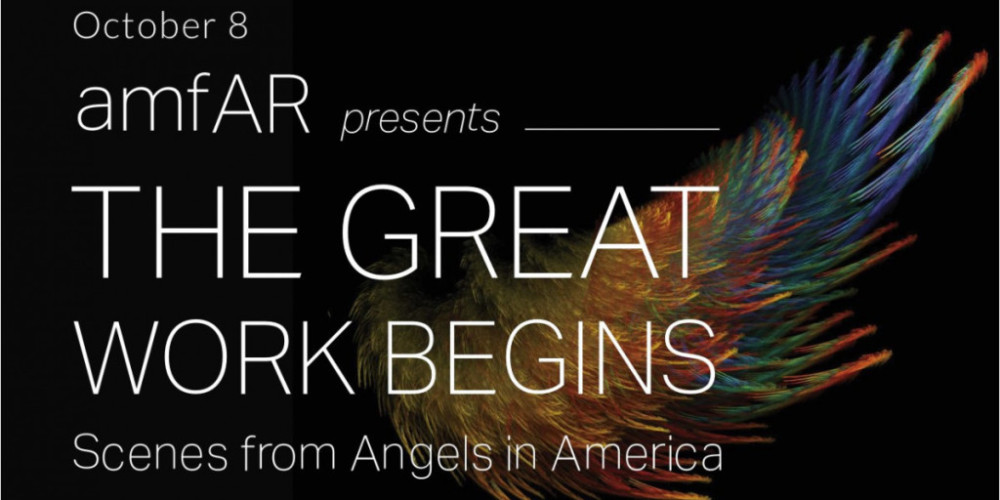 AmfAR Streams with Grace and Power: The Great Work Begins: Scenes from Angels in America

Anyone who knows me well or reads this blog with dedication (besides me thanking you) must also know how much Tony Kushner’s Angels in America means to me. It’s a piece of pure divine gloriousness, stitched with such tender desperation and survivalist compassion on a colourful canvas of intelligent introspection and passion. It makes me cry for such a vast spectrum of reasons that it defies explanation. So when I read that a band of incredible actors were coming together to perform a number of scenes from Angels in America for a benefit streaming event, I was sold like no tomorrow.

Entitled The Great Work Begins: Scenes from Angels in America, the streaming extravaganza hopes to raise buckets of money for amfAR Fund to Fight COVID-19, a truly worthy recipient considering the play’s themes and what the organization stands for. And with this starry lineup, I am confident that the conceptual creation will be a raging success. Streamed out into the world on October 8th (and currently still available on Broadway.com’s YouTube channel), the lineup features Tony winners Patti LuPone (Broadway’s War Paint, West End’s Company), Glenn Close (Broadway’s Sunset Boulevard), Nikki M. James (Broadway’s Les Misérables, Book of Morman), and other Broadway stars playing and rejoicing in the words of Tony Kushner’s masterpiece for our pleasure and passion in the midst of a possible re-isolation from the pandemic’s second wave.

Working alongside Kushner (Public’s A Bright Room Called Day), the dynamic theatre director Ellie Heyman (Pipeline Theater’s Beardo) found purpose and intent in these delicious snippets. Corraled together socially separate for the good of amfAR, these generous artists have unearthed humanity and deliverance in the shared roles of these iconic characters from Angels in America. Brian Tyree Henry (2ST/Broadway’s Lobby Hero), Andrew Rannells (Broadway/Netflix’s The Boys in the Band), and Paul Dano (RT/Broadway’s True West) each are given moments to embody the powerful and utterly compelling Prior Walter in different scenes. The engaging Rannells along with intuitive Vella Lovell (“Crazy Ex-Girlfriend“) as Harper Pitt find heartbreaking magic in the hallucinatory dream sequence that brings us to the threshold of revelations. Their entwined chemistry shines the blue streak of recognition on just how good the writing truly is (if there ever was any doubt), while Lois Smith (Broadway’s The Inheritance), given an opportunity of a lifetime, brings subtle grace and glory to Harper’s closing ‘night flight to San Francisco’ monologue that takes us to the edge with gentle ease. <img src=”https://bsp-static.playbill.com/dims4/default/2786ec9/2147483647/crop/2453×1381%2B62%2B0/resize/970×546/quality/90/?url=http%3A%2F%2Fpb-asset-replication.s3.amazonaws.com%2Ff2%2F18%2F49c60eff4f6db27374782db8519c%2Fglenn-close-s.%20Epatha%20Merkerson%5B3%5D%5B1%5D.png&quot; alt=”Glenn Close and S. Epatha Merkerson in <i>Angels in AmericaGlenn Close and S. Epatha Merkerson in The Great Work Begins: Scenes from Angels in America. Courtesy of amfAR.

The daring and brilliant Glenn Close also has one of those lifetime moments of true expansive glory when she portrays Roy Cohn, alongside the phenomenal S. Epatha Merkerson (Broadway’s The Piano Lesson) as Belize, in that fantastical morphine-induced heavenly dance of almost death. It’s tender and tight, blowing our minds with its fire, and making us wish for a future Angels production with such creative dynamic casting. With Dano’s Prior, Larry Owens (PH’s A Strange Loop) also gets his chance to bring the magnificent Belize to life, as does Jeremy O. Harris (NYTW/Broadway’s Slave Play) in a scene with Brandon Uranowitz (Broadway’s Falsettos) as Louis, Laura Linney (MTC/Broadway’s My Name is Lucy Barton) as Hannah Pitt, and the powerful Brian Tyree Henry as Prior, delivering that final Prologue that kills me each and every time. “Bye now, you are fabulous each and every one and I bless you. More life, the great work begins.”

But the glory of this whole evening’s entertainment lies inside the colorful, profound, and aggressive heavenly angels, as portrayed by Nikki M. James, Patti LuPone, Linda Emond (Broadway’s Life (x) 3), and Daphne Rubin-Vega (Broadway’s Rent). Their turn at that illustrious text flies us high into the starry night. We sit comfortably on our living room couch completely enthralled, hopefully with our credit card in hand just itching to give give give to amfAR as quick as we can, without missing one “I, I, I.” How could you not?

Now I am biased, completely and probably forever, as I do believe that this play, Angels in America, is one of the most intricate and magnificent modern American pieces of theatre written as of late. But for the uninitiated, this streamed rendering might be a muddle. A dynamic and artfully created spectacle, but a muddle, none the less. In many ways, to get the full impact, you might have to have a fairly good knowledge of the play, and/or have read that fascinating book on its creation, “The World Only Spins Forward” to really engage in this production’s full majestic power, but regardless of your knowledge, this presentation is a work of true dedication and artistic achievement, one that fills our heart with pain and joy, as only theatre truly can.

“In this time of COVID and national unrest, [the play’s] themes of racism and government failings make it as relevant and resonant today as it was when it was first performed 30 years ago,” says amfAR CEO Kevin Robert Frost. The virus is not the same, but our predicament echoes the past, bringing a personal and deliberate focus on the experience of living through a plague, be it AIDS or COVID. Angels in America reaches through our suffering in order to find hope and enlightenment, and also, on an America who is struggling while striving and failing to reach its true ideals of freedom and equality. We must keep moving forward.

Please watch and then donate here: http://www.amfar.org/angels You won’t be disappointed.