This May, Times Square Arts and the Bulletin of Atomic Scientists present Amnesia Atómica NYC, a collective effort to address nuclear threat. The public exposition on view for seven days in Times Square is centered around artist Pedro Reyes’s ZERO NUKES, a 30-foot-tall inflatable sculpture, which will function as a beacon to bring experts, political leaders, and engaged citizens together and drive conversations around the anti-nuclear movement. 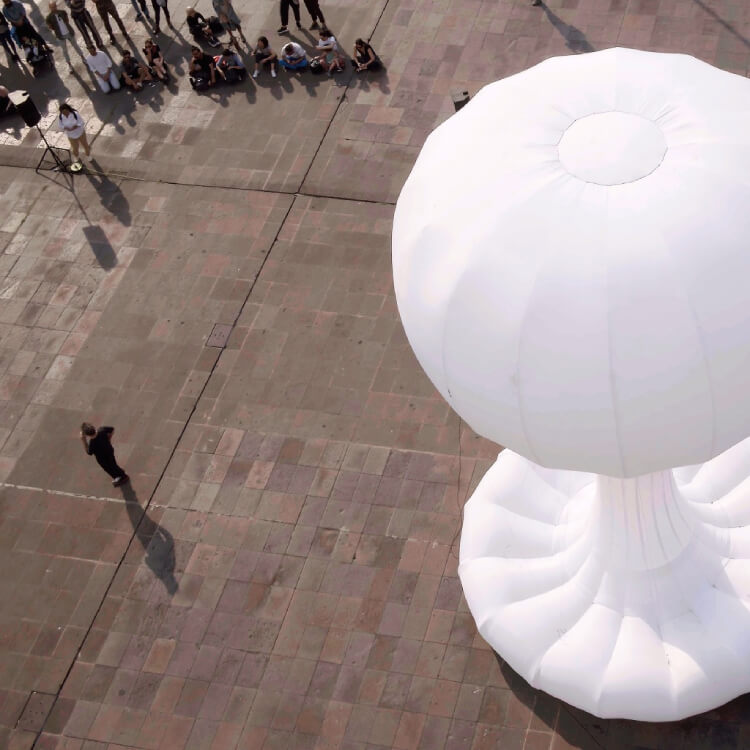 ZERO NUKES focuses on the “zero” as a graphic, visual, and conceptual element common to all languages. The structure stands as a symbol of global unity for a single non-controversial cause: to avoid the destruction of life on earth.

The sculpture will serve as a central platform for a series of public programs and events designed to spotlight the voices of activists, scientists, and community organizations in the anti-nuclear field. Amnesia Atómica NYC will feature a two-day expo on May 19 and 20 offering hands-on activities, a VR experience, information booths, and merchandise. Public programs will be led by the Bulletin of the Atomic Scientists and other experts from organizations in the field, such as the International Campaign to Abolish Nuclear Weapons, a global coalition focused on mobilizing civil society around the world to support the specific objective of prohibiting and eliminating nuclear weapons; The Tank, a Manhattan-based non-profit arts presenter and producer serving emerging artists; Games of Change, an organization that supports using games for social change; Global Zero an international movement dedicated to stopping the spread of nuclear weapons; and Union of Concerned Scientists, a science advocacy group dedicated to solving the world’s most pressing problems.

ZERO NUKES is the centerpiece of the New York City iteration of Amnesia Atómica, the traveling exposition commissioned by the Bulletin of the Atomic Scientists, an organization that focuses on three main areas—nuclear risk, climate change, and disruptive technologies—and equips the public, policymakers, and scientists with the information needed to reduce man-made threats to our existence. Amnesia Atómica debuted in Mexico City in 2020, and in addition to Reyes’s inflatable mushroom cloud, featured locally curated dance performances, and presentations by leading dignitaries. The title, Amnesia Atómica, was designed to urge visitors to not forget or ignore the global issues at hand and engage first-hand with solutions-oriented thinking and strategies.

Artists Against the Bomb
A collection of urgent messages calling for universal nuclear disarmament. The campaign is an international effort by artists, writers and activists who, through words and pictures, call for a reduction of the world’s nuclear weapons down to zero. The effort is designed to support disarmament organizations across the globe.

Stockpile
A new participatory work by Pedro Reyes where 12,075 rocket shaped balloons——equivalent to the total estimated number of global nuclear weapons—will be handed out to the public throughout the event. The balloons are a limited edition artwork that will be given to participants upon posting an image of ZERO NUKES on social media with the hashtags #ZERONUKES and #AmnesiaAtómica or upon following a participating organization such as the Bulletin.

The project will consist of a QR code leading to information that guides the public in how to get involved, including scripts with clear ideas on how to take action, reach your representative, and find organizations to follow. Join local and international efforts to reduce nuclear dangers, discuss current events with experts, connect with various education and advocacy organizations, and post your concerns to social media. You can even cast your vote to share what time you think it should be on the Bulletin’s iconic Doomsday Clock. Also, feel free to tag the following accounts on social media to get involved:

Merchandise Kiosk
The kiosk operated by public art ambassadors will feature an assortment of information as well as merchandise available for the public to buy such as shirts, hats, and buttons. The graphics on the kiosk designed by Pedro Reyes will prominently display the ZERO NUKES imagery. Any net proceeds will go towards traveling the cloud in support of other disarmament-based events.

Frieze New York Art Fair
Amnesia Atómica will be presented in collaboration with Frieze New York from May 18-22. Frieze will feature two booths dedicated to Amnesia Atómica, one designated for a historical archive featuring contributions to the disarmament movement by artists and activists in the 20th century; and the other an installation of imagery and merchandise from the ZERO NUKES campaign. One of the two booths will also feature Pedro Reyes’ limited edition interactive artwork Stockpile. Learn more about the booths.

Pedro Alonzo is a Boston-based independent curator. He is currently an Adjunct Curator at Dallas Contemporary. Since 2006 he has specialized in producing exhibitions that transcend the boundaries of museum walls and spill out into the urban landscape, addressing audiences beyond the traditional museum public. In 2017 he formalized his practice by establishing A&C. At the ICA Boston, he curated Shepard Fairey’s 20-year survey, Supply, and Demand. For the MCA San Diego, he organized the group exhibition Viva la Revolución: A Dialogue with the Urban Landscape, which featured site-specific works inside the museum and throughout downtown San Diego. In 2015 Alonzo began to develop exhibitions designed to engage the public, starting with a citywide exhibition in Philadelphia, Open Source: Engaging Audiences in Public Space, followed by working with JR to place a gigantic image of a Mexican child named Kikito, overlooking the US/México border wall in Tecate. Since 2016 Alonzo has worked with The Trustees, Massachusetts’s largest conservation and preservation non-profit, to launch and curate the organization’s first Art and the Landscape initiative, resulting in site-specific commissions created by the artists: Sam Durant (2016), Jeppe Hein (2016), Alicja Kwade (2018), and Doug Aitken (2019). In 2019, Pedro Alonzo worked with Now + There as guest curator for Oscar Tuazon’s Growth Rings and in 2020 for Jose Dávila’s To Each Era Its Art. To Art, Its Freedom. for Central Wharf Park in Boston. The most recent project he developed at Dallas Contemporary was a major exhibition that brought together rarely seen works by Japanese artist Yoshitomo Nara.

The Bulletin equips the public, policy makers and scientists with the information needed to reduce man-made threats to our existence. At its core, it is a media organization, publishing a free-access website and a bimonthly magazine. But it is much more. The Bulletin’s website, iconic Doomsday Clock, and regular events draw attention to three main areas: nuclear risk, climate change, and disruptive technologies. What connects these is a driving belief that because humans created them, we can control them. The Bulletin is an independent, nonprofit 501 c (3) organization founded by Manhattan Project scientists nearly 75 years ago. It gathers the most informed and influential thought leaders tracking man-made threats and brings innovative thinking to a global audience. The Bulletin applies intellectual rigor to the conversation and does not shrink from alarming truths.

The Bulletin’s iconic Doomsday Clock uses the imagery of apocalypse (midnight) and the idiom of nuclear explosion (countdown to zero) to convey threats to humanity and the planet. It is currently set at 100 seconds to midnight, the closest it’s ever been to midnight. The Clock is set every year by the Bulletin’s Science and Security Board in consultation with its Board of Sponsors, which includes 11 Nobel laureates. The Clock has become a universally recognized indicator of the world’s vulnerability to catastrophe from nuclear weapons, climate change, and disruptive technologies.