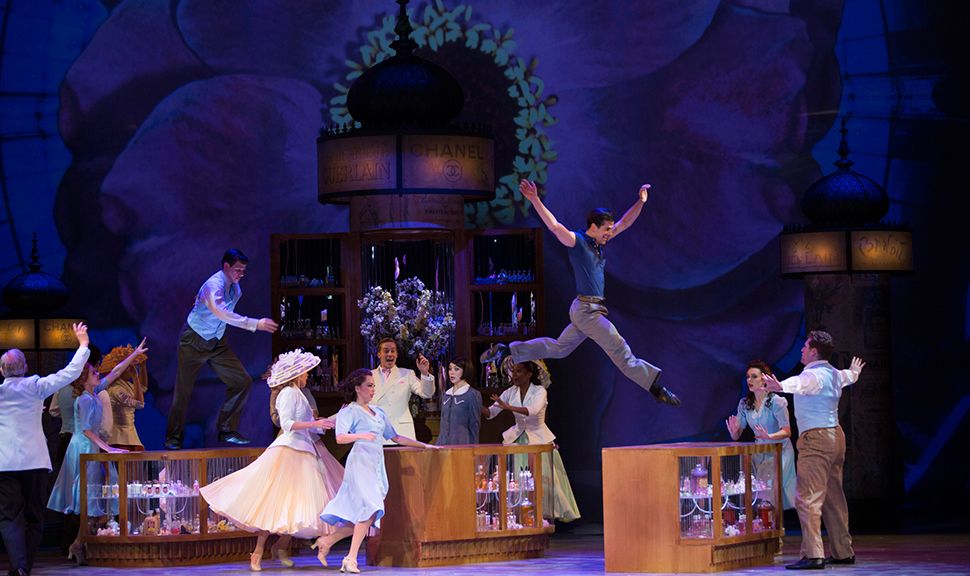 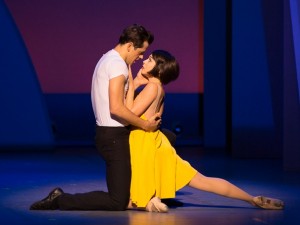 I know as I write this, I will not be in the norm. Hey, I didn’t like and still don’t like Book of Mormon. Though others are not saying it, An American in Paris is not S’ Wonderful. Based on the Academy Award winning film, playwright Craig Lucas, director/choreographer Christopher Wheeldon, arranger and musical supervisor Rob Fisher and set and costume designer Bob Crowley took this movie and chopped it to pieces. They threw in songs not from the film, “I’ve Got Beginner’s Luck,” “The Man I Love,””Liza,””Shall We Dance?,” “Fidgety Feet, “”Who Cares?,””For You, For Me, For Evermore”and “But Not for Me,” and trashed “Embraceable You,” “Nice Work If You Can Get It,””By Strauss,””Tra-la-la (This Time It’s Really Love)” and “Our Love Is Here to Stay” ….why? 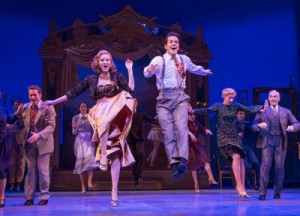 The movie, which was about three friends falling for the same girl while trying to make a life for themselves at the end of World War II, was light and airy. Now it is about an ex-GI named Jerry Mulligan (Robert Fairchild), a would-be painter, who decides to remain in Paris to escape the horrors of war. He meets and becomes friends with the down and out Jewish composer Adam Hochberg (Brandon Uranowitz) and aristocrat wanna be singer Henri Baurel (Max Von Essen). From the very beginning he sees and falls for Lise Bouvier (Leanne Cope) a ballerina with a secret who is engaged to Henri. The Nazi in this version are the ghosts of the past that still play on. 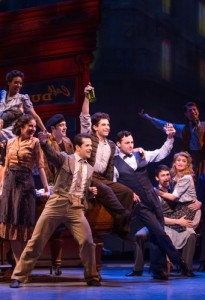 Mr. Fairchild and Ms. Cope are new to the stage and have only done ballet. He was the principal dancer with New York Ballet and she was with the Royal Ballet School in London. He handsome, but when singing next to the fabulous Max Von Essen and Mr. Uranowitz he pales. He is like a wide-eyed puppy. 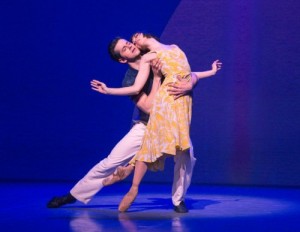 Ms. Cope is adorable wearing the sheer joy of dance on her face. Ms. Cope captures us on her journey and we feel the pull she has between loyalty and love. Ms. Cope is also the only dancer that thankfully Mr. Wheeldon has not given these strange flattened hands to (more on that later.)

Adam Hochberg has now become the narrator instead of Jerry and is vastly different than the amazing Oscar Levant who played the role in the film. With Mr. Hochberg its more like Lost in Yonkers.

Max Von Essen steps out and sings up a storm. His Henri is fully fleshed out and he is wonderful in the role. His “A Stairway to Paradise” is a highlight and I wish they had not added Adam to the mix and really made it just Henri’s song, which it was in the film. Well actually Hank who the character Henri has been combined into.

It is in the supporting roles where the acting kudos lay. Veanne Cox as Henri’s mother, is an acting lesson ranging from control to joy, as she remembers who she was and not who she has had to be.

Jill Paice plays the Nina Foch role and has transformed it to fit her perfectly. Her lovely voice soars on the duet “Who Cares?,” with Max Von Essen. 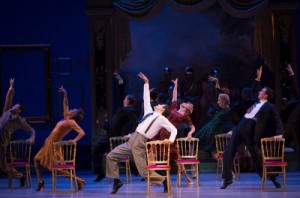 The direction and choreography by Christopher Wheeldon is hit and miss. The First Act slows down to a crawl once they finish “I’ve Got Beginner’s Luck.” The Second Act easily kept our attention. From the bottom down Mr. Wheeldon’s choreography is beautiful and well executed, but it is his hands and shoulder placement that make no sense. He flattens out his hand movements but in ballet they are rounded, sculpted, beautiful and not disjointed. I was in pain watching this. I found his work awkward and then it would lapse into beauty. I felt schizophrenic. In the Second Act the dance number was “Fidgety Feet,” but why not “Fascinating Rhythm” and do something spectacular in an up-tempo song? In the number “An American in Paris” it looked like a version of the Olympics opening number for the summer games with the Avant-garde costumes and scenery by Bob Crowley. Seriously could they have not taken the best part of the film and kept it intact? The movie after all won Oscar’s for Best Set and Best Costumes.

The ensemble is well cast and beautiful in movement and makes the vocals sound flushed out. The projections by 59 Productions were interesting as they glided across but needed to be more in rhythm, because they were just a hair off. 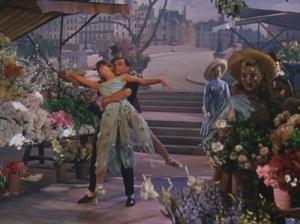 Gene Kelly and Leslie Caron and the beautiful costumes

The most amazing part of seeing An American in Paris was seeing Hal Prince in the audience. Now that made my night, as there is not one Hal Prince show that I haven’t loved and that includes his not so successful endeavors. Now he was a director!

An American in Paris: The Palace Theatre-1564 Broadway at 47th St.

Suzanna BowlingSeptember 15, 2022
Read More
Scroll for more
Tap
Les Miserables The Dumbing Down of an Audience
The King and I: Long Live The King