An Enchanted April Comes Off Broadway Via Utah Lyric Opera 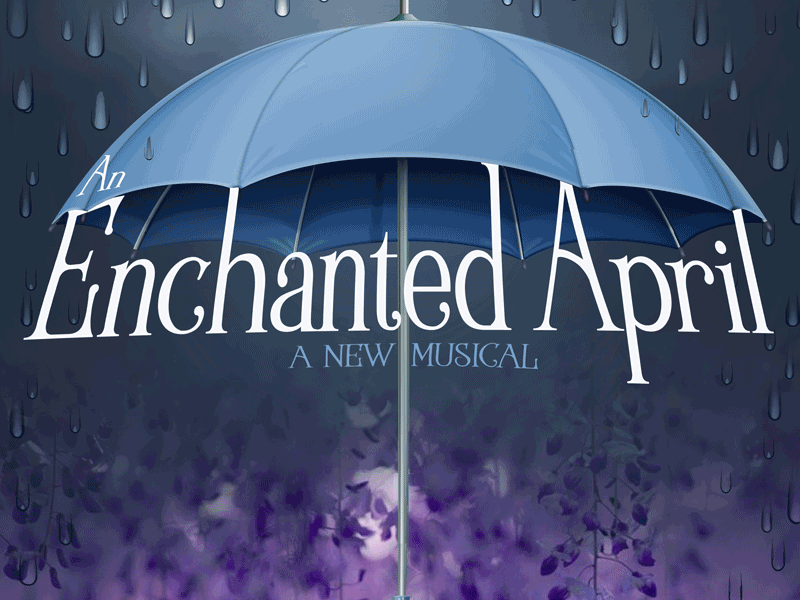 An Enchanted April Comes Off Broadway Via Utah Lyric Opera

Utah Lyric Opera, in association with Thunder Media Group, will present the New York Premiere of An Enchanted April, a new musical based on the novel The Enchanted April, by Elizabeth von Arnim, with book and lyrics by Elizabeth Hansen, music & lyrics by C. Michael Perry and directed by Alice Jankell in a limited engagement (November 1-16) at Theatre Two at Theatre Row (410 West 42nd Street).

An Enchanted April begins in London…during a particularly dreary February in 1922. Four world-weary women, desperate to escape their memories of WWI and the repression of London, dare to rent a villa in Italy for a month. Miraculously, in just one short Enchanted April, the lives and hearts of these women are transformed by wisteria, sunshine, a small medieval castle…and each other.

An Enchanted April will play the following performance schedule: Wednesday – Saturday at 8:00pm, with matinees on Wednesdays and Saturdays at 2:00pm. Tickets can be purchased by visiting www.telecharge.com

Elizabeth Hansen (Book & Lyrics) has had a varied writing, directing, and acting career, that has taken her from Broadway, to the newsrooms of the LA Times where she had her own By-Line, to the classrooms of Brigham Young University where she taught screenwriting from 1994-2000. A native of Utah, Ms. Hansen holds an MFA in screenwriting from AFI, has won the prestigious Writers Guild of America Award, an EMMY nomination, and was a finalist for the Humanitas Prize for excellence in children’s television programing. In addition, she has a Telly award and two Crystal Awards, and has won multiple screenwriting competitions. She started her career as an actress and has been seen on Broadway in: A Day in Hollywood/A Night in the Ukraine - Directed by Tommy Tune and  Do Black Patent Leather Shoes Really Reflect Up. National Tours include:  Hello, Dolly! - 20th Anniversary Tour with Carol Channing The King & I with Rudolf Nureyev;  Evita  directed by Harold Prince; and A Partridge in a Pear Tree  with James Mason. Regional Theatre credits include:  Guys & Dolls  with Milton Berle;  Oliver!  directed by Tony and Oscar winner, Onna White, and many others. Regionally, she has been seen as: “Marge” in  The Bridges of Madison County  (Eccles Regent Street Theatre); “Mother Superior” in  Sister Act, and “Eulalie Mackecknie Shinn” in  The Music Man  (Sundance Summer Theatre).  Her directing credits include:  Carmen Pine Mountain Music Festival;  Rigoletto, Madama Butterfly, La Traviata, La Boheme, Il Barbiere di Siviglia, Singing the Stories of Christmas, and Singing the Stories of America – Utah Lyric Opera;  Big River - Sundance Summer Theatre,  Enchanted April: a musical-Covey Center for the Arts. www.elizabethhansen.us.

C. Michael Perry (Music & Lyrics) has had a diverse career.  Born in Colorado and raised in Chicago, he found the theatre at age 14 and has made all or part of his living in theatre, film and television ever since. He has worked in both network and public television, national and regional commercials, creating shows for PBS, where he won an Emmy Award for his PBS children’s program,  Cinderabbit, which also won him a “Best of The West” Public Television award.  While at PBS he worked with James Coco, Rene Auberjonois, Peter Coyote, Barnard Hughes, Mildred Natwick, and was also able to be a dialogue coach for Dame Judith Anderson in the PBS series  Showcase.  On the  Donny and Marie Show  and  The Osmond Family Hour at ABC, he worked with such stars as Buddy Hackett, Andy Griffith, Bob Hope, Paul Lynde, Robert Conrad, Harvey Korman, LeVar Burton, Ann-Margret, Betty White, and Ruth Buzzi. He also choreographed a number for Dick Van Dyke for an ABC-TV Special. As an Actor/Performer he has played in front of live audiences across the US and Europe in numerous plays and musicals. He has directed over 60 shows on the professional, regional, community and education level, including:  Amahl and the Night Visitors, Hansel and Gretel -Utah Lyric Opera;  Oliver, The King and I-Alhambra Playhouse;  Big River  (Choreographer/Music Director) -Sundance Summer Theatre;  The Honorable Urashima Taro-BYU, to name just a few. After his professional life, Mr. Perry turned to teaching, where he inspired high school students in public schools for 14 years. He is an award-winning Composer-Lyricist and Playwright of over fifty plays and musicals, most of which have been produced nationally, internationally and published. He is a member of  The New England Theatre Conference, Maine Arts Commission, The New England Foundation for the Arts, and ASCAP, and is a graduate of Brigham Young University with a BA in Theatre.

Alice Jankell (Director) for Disney, Alice helped to create and develop new Broadway musicals.  As Associate Artistic Director of The Williamstown Theatre Festival, her directing work included As You Like It,  Dinah Was, and Enough Rope, the special event on Dorothy Parker starring Elaine Stritch.  Alice has worked and learned in venues as varied as the Mark Taper, the L.A. Opera, The Public, New York Theatre Workshop, La Mama, and City Theater, among many others, as well as in film and TV.  Her own scripts have been developed across the country.   Her favorite acting roles include a solo performance, backed by the L.A. Philharmonic at the Hollywood Bowl, and she has taught acting at Carnegie Mellon.  Alice was Creative Director of F.A.B. Women (For, About, and By Women) under The Barrow Group’s Off-Broadway umbrella, helping to generate and produce 48 new plays.   Alice is a founding member of Core Artists Ensemble, and a New York Theatre Workshop Usual Suspect. Education: Wesleyan, Masters at NYU. www.alicejankell.com.

Suzanna BowlingMay 17, 2022
Read More
Scroll for more
Tap
Get Ready To Rock With Janis….Joplin
Kennedy Center Kicks Off Its Sunday Shoes with Footloose