An Enchanted April, Not So Enchanting 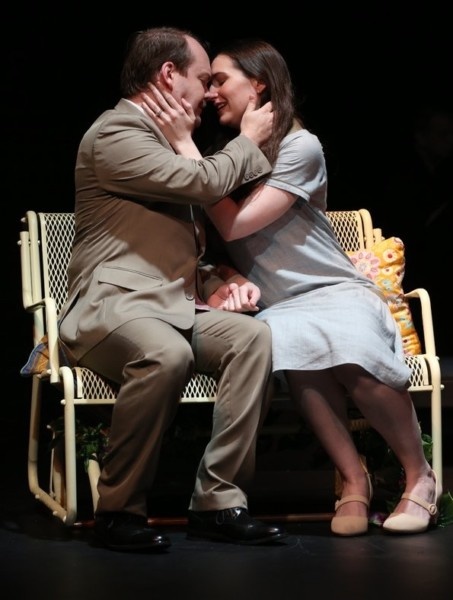 An Enchanted April, Not So Enchanting

Utah Lyric Opera, in association with Thunder Media Group, opened their New York Premiere of An Enchanted April, a new musical based on the novel The Enchanted April, by Elizabeth von Arnim, with book and lyrics by Elizabeth Hansen, music & lyrics by C. Michael Perry and directed by Alice Jankell last night at Theatre Row, 410 West 42nd Street.

An Enchanted April begins in London, when at a ladies club Lotty (Leah Hocking) reads in a newspaper advertisement about San Salvatore, a Tuscan villa. She convinces Rose (Christiana Cole) that she sees her there. Lotty feels trapped in her marriage to Mellersh (Jim Stanek). Rose and Frederick’s (Aaron Phillips) marriage is also failing. They decide to rent the villa and go away on holiday, but it is too expensive, so they advertise for house mates. Lady Caroline (Gena Sims), an acquaintance of Frederick’s isn’t in love with her fiancé and Mrs. Fisher (Alma Cuervo), a rich widow is financially well off. Both apply and now the four are set. Renting the villa means references, but the time is 1922. Rose appeals to the villa’s owner Briggs (Peter Reid Lambert). He falls in love with her thinking Rose to be a war widow.

At the villa, Francesca (Melody Meeks Putnam), the maid, curses under her breath in Italian at these women, who have come to Italy to find themselves and they do. Lotty who feels unloved and under appreciated by her husband Mellersh, but she misses him and invites him to join. He ends up meeting Lady Caroline and Mrs. Fisher and sees Lotty’s value. He learns to show Lotty his love for her, which was buried all this time.

Rose and Frederick, lost a child and the guilt has left the marriage empty. Both turned away from each other. Lady Caroline, was a nurse and the hours of war have left her bereft and Ms. Fisher feels that life has past her by. In the end, all got what they came for during one Enchanted April.

The score is messy, underworked and banal. The lyrics don’t always hit the mark. At the end of Act 1, we get what sounds like a snippet from Into The Woods, sadly it is “Agony”. The end of the show has the run of “Sunday” from Sunday in The Park With George.

The good news is for the most part An Enchanted April, is sung extremely well and is handled competently by musical director Richard Daley, though who’s idea to use the a synthesizer was jarring. Mr Daley is really a wonderful musical on his own.

Christiana Cole, Jim Stanek, Peter Reid Lambert and Aaron Phillips have exquisite voices, especially Mr. Phillips. Ms. Hocking grows on you and will touch your heart with her comedic and heartbreaking performance. Alma Cuervo’s “This Feeling”, shows the audience what I have known since Quilters, just how this women can interpret a song. Ms. Putnam, is rather hysterical as the maid. Who fails here is Gena Sims, who’s singing just isn’t up to par.

Alice Jankell’s direction is too much for the space. William Armstrong’s sets is not clever enough and the lighting doesn’t add just how magnificent San Salvatore is, nor the time of day. Matthew Solomon’s costumes are a mesh of era’s.

An Enchanted April isn’t horrible, it just isn’t good despite the talent on stage. The musical, made me want to see the movie, as the storyline is touching and the end of this over two hour long show felt rushed.