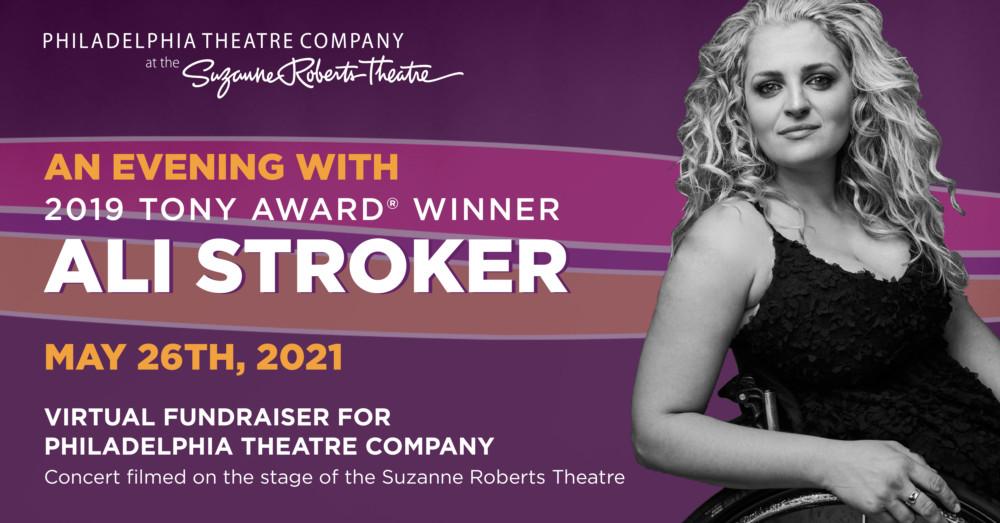 Join Broadway’s groundbreaking Tony Award®-winning Ali Stroker for a virtual concert filmed on the stage of The Suzanne Roberts Theatre. Stroker, returns to PTC 10 years after her Barrymore Award-nominated performance in The 25th Annual Putnam County Spelling Bee to perform a live concert from PTC’s home stage to help the company raise funds as it continues to recover from the pandemic and raise funds for the 2021-22 season. An Evening with Ali Stroker will be held Wednesday, May 26 at 7:00pm.

Ali Stroker won the 2019 Tony Award® for Best Featured Actress in a Musical for her role as ‘Ado Annie’ in Rodgers and Hammerstein’s Oklahoma!

She also made history as the first actor using a wheelchair to appear on Broadway in the 2015 revival of Spring Awakening.  PTC prioritized accessibility when building the Suzanne Roberts Theatre and so we are even more thrilled that she made history on our own stage in the early days of her career.

Some of her favorite credits include the Lifetime holiday film, Christmas Ever After, Fox’s Glee, The ABC series Ten Days in the Valley and CBS’ Blue Bloods. Her many television appearances range from Fox’s Lethal Weapon, CBS’ Instinct, and The CW’s Charmed, to Comedy Central’s Drunk History.

Her cabaret act at Green Room 42 won acclaim, and she solo’ed at the Kennedy Center, New York’s Town Hall, Lincoln Center and Carnegie Hall. Her mission to improve the lives of others through the arts, disabled or not, is captured in her motto: “Turning Your Limitations Into Your Opportunities.”

Audiences can view the event online, through a dedicated streaming link. Tickets start at $25. More information can be found at philatheatreco.org or by calling the company’s virtual box office at 215-985-0420.

Magda KatzJune 9, 2021
Read More
Scroll for more
Tap
What to Watch in The New Year: May 13
The Glorious Corner