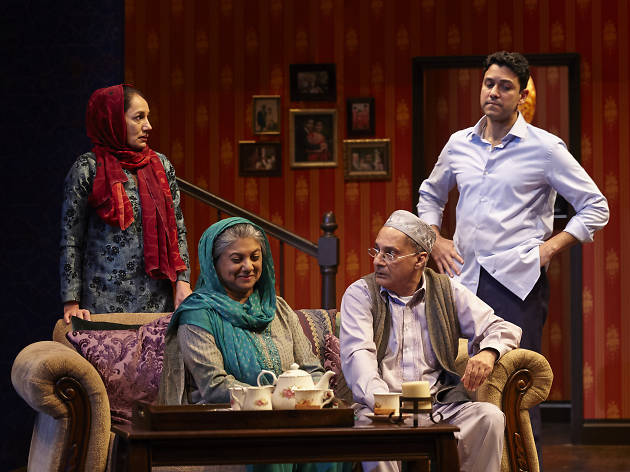 An Ordinary Muslim Clearly States How Hated We Are

An Ordinary Muslim Clearly States How Hated We Are 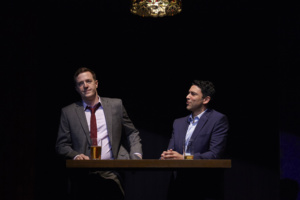 “I don’t want a job – I want dignity.” Azeem Bhatti

In order to have dignity, don’t you have to first honor and respect yourself and others? In Hammaad Chaudry’s An Ordinary Muslim, Azeem Bhatti (Sanjit De Silva) does neither and yet we are expected to feel sorry for this out of place man who states, “I don’t have a history. I don’t have a heritage. I don’t know who I am!” The answer is none of us really know this, even those of us who are born into the country of residence. So why all the crying and feeling sorry for ourselves? Why not make our own reality? Why put others through a personal hole of destruction, when you can uplift and make a difference?

This world premiere of An Ordinary Muslim, at the New York Theatre Workshop, has Mr. Bhatti wanting to kill those who are not like him and sympathizing with those who commit acts of terrorism. This play just grounds in the message that Muslims are not to be trusted and here’s why. 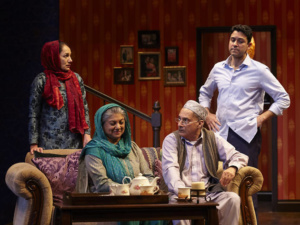 As we follow the Bhattis, a Pakistani family turned British, we learn of their “struggle”. We meet Akeel (Ranjit Chowdhry) and Malika (Rita Wolf) who, due to the history between Britain and India, moved to Britain and had their children, who were well educated and now provide for their parents. Javeria (Angel Desai), the oldest daughter, has come home to West London due to a family problem that has resurfaced. Azeem (De Silva), who provides for the parents and his new wife, Saima (Purva Bedi), wants Javeria to take their father to her house. It seems Akeel used to beat Malika and Azeem, and it has resurfaced. The problem, however, is even more insidious. Malika took out her frustration on Javeria, beating her as Akeel showered her with love. Malika continues her wrath, showering Javeria’s son with presents and ignoring her daughter. Just from this alone, you can see this is a people problem, not an immigrant problem; it happens to those of us who are not immigrants as well. 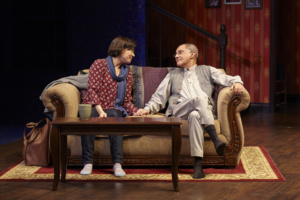 In the meantime, it is clear Azeem has a chip on his shoulder. He barks at his sister, father, wife and those who try to help him. He is drenched in self-pity and a spiral of self-destructive behavior. Where Muslims are not supposed to drink alcohol, we learn that at one time Azeem had a problem. Before she was his wife, Saima believed in him and helped him through this rough patch. Azeem feels pressure from everyone. His wife now wants to wear a hijab at work and Azeem is furious as he sees that “In this country, a good Muslim is an invisible Muslim.” Azeem is a banker up for a promotion at work. This is a big deal because his father dealt with “They don’t promote Pakistanis here!” His wife and parents are thrilled by the prospects of his promotion at a West London bank. Telling everyone he got the promotion, the truth is a little more harsh.

Azeem refuses to see that games must be played in order for this to happen. He berates his best friend David (Andrew Hovelson) into getting him the interview, making David put his job on the line because Azeem cannot deal with who he considers “his racist boss”. He shows up to the interview without a tie, refusing to fit in and insults the bosses. When he loses the position, Azeem blames David and his boss, even though his ex-boss offers him his old job back, if he will apologize for undermining him. Once successful, Azeem ends up as a waiter and lying to everyone and blaming everyone, except himself.

Azeem also dislikes and condemns the community and religious leaders Imran Jameel (Harsh Nayyar) and his son, Hamza (Sathya Sridharan). He doesn’t fit in this world either.

In the end, Azeem loses almost everything, deciding to run from responsibility and his family in order to find himself.

The cast is wonderful in their portrayals. De Silva reeks in smoldering anger. We can see why Chowdhry beat his wife, as both are cold and rather unfeeling. We see the pent-up bitterness in both Chowdhry and Wolf and we see the faith in Bedi.

The show is well produced, but I have some major problems with this play. First, to say on any stage that terrorism should be understood because displaced people don’t know who they are and feel left out is unthinkable to me. There is no real reason to kill out of rage. Secondly, to expect a promotion not knowing that no matter where you are from, you are most likely going to have to play the game, is naive and unrealistic. Under-minding anyone’s work is cause for termination, no matter who you are and where you are from.

We all have baggage, we all have issues, and frankly, in order to survive, we need to get over it.

Suzanna BowlingMay 17, 2022
Read More
Scroll for more
Tap
Edward Albee’s At Home at the Zoo is Smart Theatre
Jamie Brewer of Amy and the Orphans Shows That Talent Comes in Many Forms