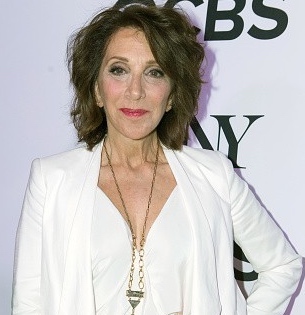 Andrea Martin has been forced to drop out of the upcoming Broadway production Gary: A Sequel to Titus Andronicus after breaking four ribs in a recent accident during rehearsals.

Cast member and Tony Award nominee Kristine Nielsen will assume Ms. Martin’s role of ‘Janice’. Tony Award winner Julie White will join the company in the role of ‘Carol’, which was intended to be played by Ms. Nielsen.

Gary will now begin preview performances on matinee Saturday, March 9, with an opening night still set for Thursday, April 11 at the Booth Theatre.

Producer Scott Rudin, in a statement, said, “There is no greater company member than Andrea Martin, and we are heartsick to see her depart the production.  We wish her the speediest recovery possible.  We are very grateful to both Ms. Nielsen and Ms. White for stepping up and stepping in so swiftly.”

Ms. Martin said, “I am heartbroken to have to leave the production and have tried to convince the doctor that my funny bone is stronger than my broken ribs. But regretfully I must follow the doctor’s orders. I love everyone involved in this beautiful play and will miss them profoundly. I will be cheering them on from the audience at the Booth Theatre.”

George C. Wolfe added, “Andrea is a gifted artist who has already made an indelible mark on this wonderful play which we can’t wait to share with the world.”

In Mac’s extraordinary new play, set during the fall of the Roman Empire, the years of bloody battles are over. The civil war has ended. The country has been stolen by madmen, and there are casualties everywhere (among them a midwife on the verge of death – White). And two very lowly servants – Lane and Nielsen – are charged with cleaning up the bodies. The year is 400 – but it feels like the end of the world.

Nielsen’s Broadway credits include Present Laughter; You Can’t Take It With You; Bloody, Bloody Andrew Jackson; and her Tony-nominated performance in Vanya and Sonia and Masha and Spike, among others.

White won the Tony Award for her starring role in 2006’s The Little Dog Laughed. Other Broadway credits include A Doll’s House, Part 2; the revival of A.R. Gurney’s Sylvia; Airline Highway; Vanya and Sonia and Masha and Spike; and The Heidi Chronicles.