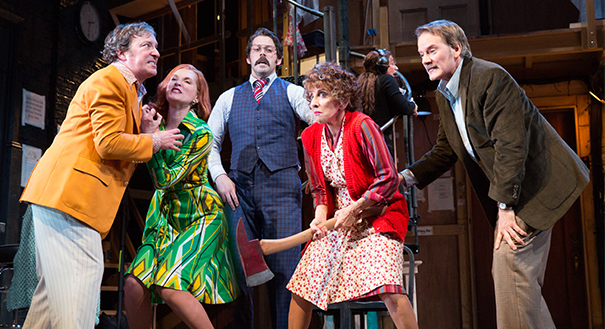 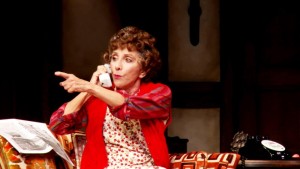 I saw the 1993 production of Noises Off with the amazing Dorothy Louden, Victor Garber, Brian Murray, Deborah Rush, Douglas Seale. It won a Drama Desk for Best Ensemble. I saw it again in 2001 with Patti LuPone, Peter Gallagher, Faith Prince, T.R. Knight, and Katie Finneran. That production was nominated for a Tony and Drama Desk Award as Best Revival of a Play. Ms. Finneran won the Tony and the Drama Desk for Best Featured Actress. The 2016 production  of Noises Off led by Andrea Martin is funny, but it is missing hilarious. Part of that is not everybody is on the same level. Each has a funny moment but it fades into the scenery. 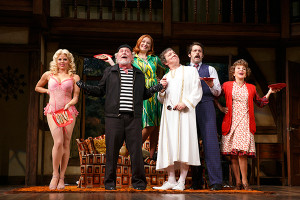 Michael Frayn’s 1982 classic comedy is an homage to backstage antics of a really bad and getting worse theatre company. Done in three acts and one-intermission we follow a company of second-tier actors who are performing the first act of a British sex farce called “Nothing On.” Set in a country house with multiple doors and two stories, we are at the dress rehearsal, which has actors missing lines and cues until one wonders how this play will ever open. Act two is set backstage as romances and rivalries make total mayhem. In the third act the show is coming to the end of its run and everyone is losing it. Addictions, egotism and human failing make up the comedy. 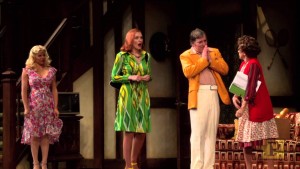 Dotty (Andrea Martin) is a once-beloved television star. She has been reduced to playing the maid. She cannot remember her lines or her cue as to where to put the sardines. She is also having an affair with the younger insecure Garry Lejeune (the fabulously nimble David Furr, this guy can fall) who pleads for motivations from the director, Lloyd Dallas (Campbell Scott), then ignores him. Lloyd is sleeping with sexpot Brooke Ashton (Megan Hilty), who keeps losing her contact lens rendering her virtually blind and requiring the cast to stop the rehearsal and search the stage. Ms. Ashton is an amateur with all of the gestures and mouthing of others lines. Belinda Blair (Kate Jennings Grant), is the actress who has it together and Frederick Fellowes (Jeremy Shamos) gets nose bleeds and passes out anytime there is violence. Selsdon Mowbray (Daniel Davis) is an alcoholic who can’t make his entrance on cue. Add to this mix Poppy, the stage manager (Tracee Chimo) who is also sleeping with the director and is knocked up and Tim Allgood (Rob McClure) the nervous stagehand who trembles violently when he has to go onstage.

Ms. Martin knows how to get a laugh. Herrin’s production has moments of comedic gems such as the pratt falls by Mr. Furr, Ms. Hiltey’s climbing down staircases to find her contact or Mr. McClure trembling with fright is definitely high comedy.

Mr. Frayn’s comedy is amusing and sure to keep audiences entertained.

The problem for me is this production didn’t build and everything seemed one note. Maybe I have just seen one two many fabulous productions.