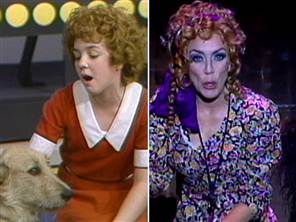 Over 30 years ago Andrea McArdle delighted audiences as Broadway’s original redheaded orphan in the Tony-winning musical Annie. After her “Hard Knock Life” days, McArdle continued a sucessful acting career in shows such as Les Miserables, Beauty and the Beast and State Fair. McArdle’s career came full circle in the North Carolina Theatre’s summer production, as the show’s villainous Miss Hannigan. Now Tony Award nominee Andrea McArdle, will join the show’s writers for a special January 27 reunion at BroadwayCon. In addition to McArdle, the event will feature assistant choreographer Mary Jane Houdina, as well as cast members Shelley Bruce and Steve Boockvor. Martin Charnin (lyrics), Tom Meehan (book), and Charles Strouse (music), who will also be part of the 8 PM event that will be moderated by Jennifer Ashley Tepper.

The panel will give “the inside scoop on how Annie was written, its road to Broadway, backstage tales, and the legacy of everyone’s favorite red-headed orphan.”

BroadwayCon has also announced a 25 percent student discount offer for individuals with a valid student ID. The discount applies to general weekend passes and single-day passes for the three-day event.

Use code BCSTUDENT to access the discounted rate. Students will need to provide a student id when checking in to the event.