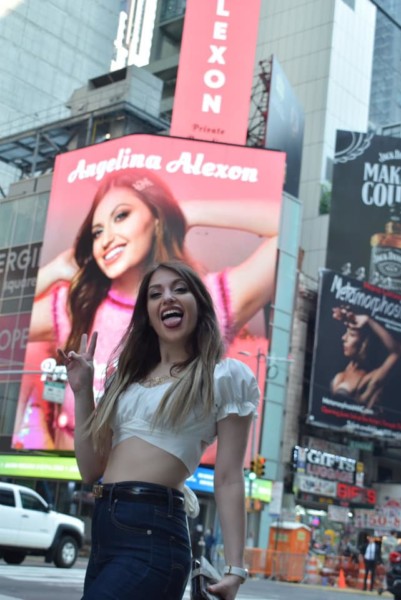 On July 7th social media sensation, Greek-American Angelina Alexon celebrated the release of her pop single “Private Paradise” in Times Square. Alexon spent all day with fans who were invited to meet the singer on 48th Street and 7th Avenue in front of her giant billboard. “Private Paradise” was recorded in LA where she worked with Multi-Grammy winning producer Robert Cutarella.

The video release party was at Somewhere Nowhere at 112 W 25th Street.

Alexon has been performing live on the Las Vegas strip, staying busy with viral content. Singing in eight languages, her impressions video “One Girl 15 voices” went viral in 2017 with over 30 Million views. Her impressions of Ariana Grande, Celine Dion, Mariah Carey, and more, had her featured in several major publications.

Her video “What it’s like to have a Greek friend” which she co-created and co-starred with social media star Markian went viral in 2019 with over 25 Million hits.

The pandemic cancelled her summer 2020 U.S. and European tour, but Angelina released a new video “1 song in 5 languages”, while supporting Global Citizen whom she partnered with for her own #TogetherAtHome virtual concert on her FB fan page and reached close to 2 million views on Facebook.  A follow up called “Lucky Gem” is in three languages.

Alexon is one busy performer.

Genevieve Rafter KeddySeptember 14, 2021
Read More
Scroll for more
Tap
What to Watch: July 15
Times Square Violence Continues As Teen Shooter Will Be Tried As An Adult