Angels in America: A Sweeping Masterpiece, a Poetic Volume of History

Angels in America: A Sweeping Masterpiece, a Poetic Volume of History

Suzanna Bowling
London’s National Theatre’s Angels in America on Broadway is spectacular. This epic piece by Tony Kushner won the Pulitzer and still holds up today. Set in 1980’s America, the AIDS crisis is in full bloom and is the scene for political and moral upheaval characterized by the policies of President Ronald Reagan. 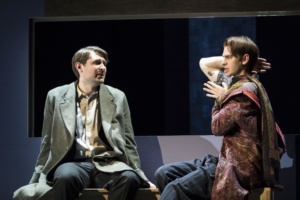 This was my 3rd time seeing this magnificent work. The first was in 1990 and 1992 at the Mark Taper Forum in LA. Then, the 2010 production directed by Michael Greif featured Christian Borle as Prior, Zachary Quinto as Louis, Billy Porter as Belize, Bill Heck as Joe, Zoe Kazan as Harper, Robin Bartlett as Hannah, Frank Wood as Roy, and Robin Weigert as the angel and is still seared into my brain. 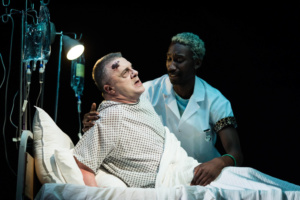 Marianne Elliott directs this nearly eight-hour fantasia with aplomb. Angels in America is broken down into two parts: Millennium Approaches and Perestroika. At first glance, this production is confusing due to the lighting by Paule Constable and Ian MacNeil’s set design, which seems more like a neon 50’s movie set with a futuristic dome. Even Adrian Sutton’s score seems to mimic that era. Susan Brown, as the preacher, is the first to appear and her voice is too high pitched, but Kushner’s language starts to sink in and it is riveting poetry. Here, the characters speak around and through their feelings; they are complicated humans in a maddening world. First up, the fast paced, obnoxious, patronizing, it’s-all-about-me lawyer; the loathsome Roy Cohn (Nathan Lane). He is trying to talk Joe (Lee Pace) into going to Washington as his inside man. Joe is a Republican Morman who cannot come out, even to himself. He is married to the pill-popping Harper (Denise Gough) plagued by visions of doom. She knows her husband is gay, but neither can face or voice the truth. Joe works with Louis Ironson (James McArdle), a gay Jew who has just learned his lover, WASP Prior Walter (Andrew Garfield), has AIDS. As Prior’s illness progresses, Louis, unable to cope, moves out, leaving Prior to deal with abandonment issues. Prior begins to receive visits from a pair of ghosts who claim to be his ancestors, and hears an angelic voice telling him to prepare for her arrival. Prior thinks he is having an emotional breakdown. Harper, in her drug-fueled escapist fantasy, crosses paths with Prior even though the two of them have never met in the real world. When Joe’s conservative mother Hannah arrives in New York, Joe admits his homosexuality and begins an affair with Louis. Denying her son’s homosexuality, Hannah instead tries to force a reconciliation between Harper and Joe. Cohn, who is also deeply closeted, starts to die of AIDS. Cohn uses his political connections to secure a supply of an experimental drug, AZT, at the expense of withholding the drug from participants in a drug trial. Alone in a hospital, Cohn finds himself judged by his night nurse Belize, a former drag queen and a friend of Prior’s (Nathan Stewart Jarrett) as well as the ghost of Ethel Rosenberg (Susan Brown) who he helped send to the electric chair. At the end of Part One, Prior is visited by an angel (Amanda Lawrence) who proclaims him to be a prophet and tells him that “the Great Work” has begun.

In Perestroika it is December 1985, the Angel reveals to Prior that the progress of mankind on Earth caused Heaven to physically deteriorate. Prior goes to a Mormon visitor’s center to research angels, where he meets Harper. The two recognize each other from their shared dream. Prior collapses from pneumonia and Hannah rushes him to the hospital. At the hospital, the Angel reappears, enraged that Prior rejected her message. Prior wrestles the Angel, who relents and opens a ladder into Heaven. Prior climbs to Heaven and tells the other angels that he refuses to deliver their message, as without progress humanity will perish. Belize informs Louis about Joe’s connection with Cohn, whom Louis despises. Louis dumps Joe and Joe physically assaults him. Cohn berates him for leaving his wife for another man. Ethel Rosenberg delivers to Cohn the final blow: Cohn has been disbarred. Belize forces Louis to visit Cohn’s room, where Louis recites the Kaddish for Cohn. Unseen by the living, Ethel joins Louis in the prayer, symbolically forgiving Cohn before she departs for the hereafter. Belize and Louis then steal Cohn’s hoarded AZT for Prior. The play concludes five years later. Prior and Louis are still separated, but Louis, along with Belize, remains close in order to support and care for Prior; Harper forgives Joe, but refused to stay with him. Prior, Louis, Belize, and Hannah gather before the angel statue in Bethesda Fountain. Prior talks of the legend of the Pool of Bethesda where the sick were healed. Prior delivers the play’s final lines directly to the audience, affirming his intentions to live on and telling them that “the Great Work” shall continue. 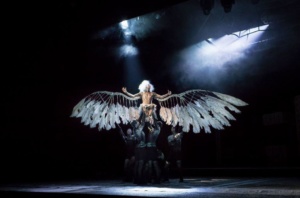 Nathan Lane embodies Cohn in a way that you almost feel sorry for this monstrous man. He finds the humor underneath the ugliness. Garfield begs you to love him, which doesn’t happen right away. His physical performance takes him through a descent into semi-madness and makes him a magnetic force. He is wildly effeminate, full of giggles, but with a heart and soul that begs us to pray for him. Lee Pace makes us morn for this man so caught up in religion and loneliness that he cannot break free of his guilt complex. Nathan Stewart Jarrett made me laugh and remember all those I lost. I knew many people like Belize. Who I wasn’t sold on was James McArdle’s Louis. I just found him whiney and could not see how two men could put up with him. This role to me is the most heartbreaking because he cannot get past his own fears to truly love and the damage he causes is immense.

As for the women, Denise Gough’s Harper is a study on mental illness. She is superb. Susan Brown excels as Hannah and Ethel while Amanda Lawrence makes a terrifying Angel, though I didn’t quite get the puppetry version complete with a tattered American flag dress. In past productions, she usually descended from the sky. Here, she is a human puppet, ascending from below the stage on the shoulders of a group of spandex-clad figures referred to in the program as the “Angel Shadows” who manipulate her wings (a lot of the times out of sync.)

The major critique that I have is it seems as if Marianne Elliott never lived through this crisis or was deeply aware of the attitudes that were strongly happening. A lot of gay men hid their sexuality for fear of being outed from their jobs. When Prior and Belize confront Joe, we never see his fear. We never see why Louis is so afraid and is willing to give up on Prior. In past productions, we saw this emotional turmoil.

Kushner’s sensitive, searching writing comes searingly though in Perestroika. As Prior rejects celestial pleas to cease humanity and instead chooses a mortal life, he urges us out of our past. Human dimensions have its limits, its imperfections, but life is the thing we strive for.

Angels in America shows us that we have not progressed that far. We have not taken up the rally call and we are still stuck in that same quicksand. We need to remember, we need this kind of voice to continue. This is a masterpiece, a show that will sear you to the bone and you will be all the better for it.