Animaniacs in Concert and The man Who Has Brought Over 2,000 Voices to Life

Animaniacs in Concert and The man Who Has Brought Over 2,000 Voices to Life

Maybe you’ve never heard of Rob Paulsen, but you’ve heard him. A lot! Paulsen is a voice over actor who can be heard on Pinky and the Brain, Animaniacs, Teenage Mutant Ninja Turtles, Jimmy Neutron Boy Genius, and most of the animated projects for nearly three decades.  With over 2,000 (yes, that’s right) half-hour programs and dozens of films, video games, and other animated media to his credit, Paulsen is one of the hardest working, most in-demand, and most beloved voice artists in the industry, earning (so far) a Daytime Emmy and Peabody, three times winning the Annie Award (for voice actors). 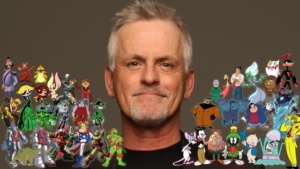 He also just won the biggest fight of his life – defeating cancer of the throat after a grueling year of aggressive treatment – and with a renewed passion for his craft, he’s finding some new challenges and some old familiar faces there to guide him into the next phase of his career.  In addition to continuing his immensely popular podcast and video series Talkin’ Toons on Nerdist, touring with his show Animaniacs In Concert!, Paulsen is still involved with Teenage Mutant Ninja Turtles as the role of director, getting to work on the other side of the glass.

News of Paulsen’s lengthy illness and forced hiatus might come as a surprise to some, as upon the news of his diagnosis, Paulsen chose to keep his cancer private except for family and those closest to him in his professional career.  “Everybody’s got their own stuff to deal with, and this was my turn,” he recalls today, now still recovering but officially cancer free.  “I’ve had a damn good ride up to now, and if the worst had happened, it was okay, I had a 35 year run, so I didn’t feel the need to say anything.”  That’s not to mitigate the particularly ironic horror of one of the industry’s top voice actors getting a disease that attacked his very livelihood:  but the same success that was now in jeopardy is the same thing that afforded him a healthy perspective.

“It was the people who I met throughout my career who were affected by cancer that were my inspiration,” he explains.  Because of his beloved characters, he’s frequently met or spoken with hundreds of infirm children who had their wishes come true via a conversation with Pinky or Donatello.  “Their parents keep in touch with me when those kids pass away,” Paulsen says, “saying ‘we can’t tell you how much your shows mean to our kids.’  That opportunity, to bring that into their lives, that gave me the example to deal with my own pretty intense circumstances.  I had these great teachers.”

Early voice work on series such as the animated G.I. Joe brought Paulsen in contact with the world of professional voice actors at a time when the profession and the industry was just about to explode.  Along with industry vets like Frank Welker, Tress MacNeille, Billy West, John DiMaggio, and LaMarche, Paulsen became a part of the “next generation” of great voice artists following in the tradition of Mel Blanc, June Foray, Arthur Q. Bryan, Hans Conried, Don Messick, and Bea Benadaret.  G.I. Joe lead to an audition at Hanna-Barbara for a revival of the classic series Jonny Quest.  Paulsen landed the role of Hadji, Jonny’s Indian-born adopted brother, and he knew he had found a career.  “I’m an average-looking white guy from Michigan,” he says incredulously.  “In real life I would never get to play that character, or a teenage turtle, or whatever.  This was a gig where I was really only limited by my own imagination, not by my type I was or the way I looked.”  Paulsen credits veteran television director Gordon Hunt for casting him and mentoring him at a key point in his career.  “I quickly learned about how to be creative and think on your feet, and not be encumbered by how you see yourself.  That is absolutely integral to my success.”

Paulsen was the original voice of Raphael on the first Teenage Mutant Ninja Turtle series – an early project that unexpectedly became a pop culture sensation.  A quarter of a century after that original series, Paulsen was approached about doing the reboot of TMNT – but to audition for Donatello.  “I wondered – did they know that I did the original Raphael?  Are they sure they wanted me to do the job?  I’m a white guy in his late fifties.”  It turned out that the new producers had been raised on the original series and were thrilled that Paulsen might be available to work with them.  That generation of millennials who grew up in the world of Paulsen’s characters are now his colleagues.  “And it reminded me again – nobody cares what you look like, and how much that makes me more passionate for my job and having fun with it.”