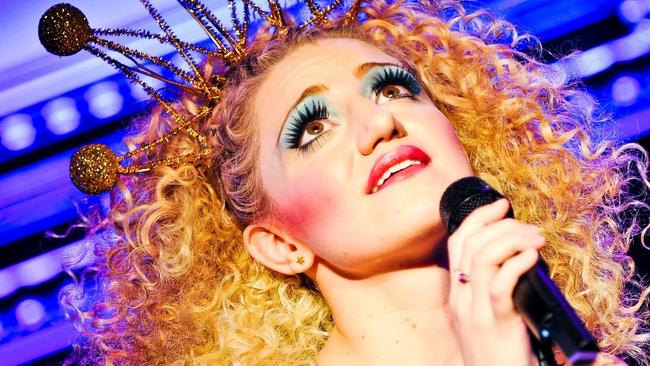 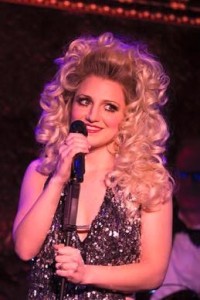 Life is a cabaret, indeed!   In what was once the “VIP” room at the legendary and infamous 1970’s disco hot spot, Studio 54, has now emerged a modern day performance space where top Broadway talent entertains nightly in the new cabaret club,  54 Below. Names like Patti LuPone  Norbert Leo Butz, Jenifer Lewis, Laura Osnes, Faith Prince, Anthony Rapp and  Ben Vereen regale, singing Broadway Standards and telling personal anecdotes from their bank of showbiz experiences in this intimate environment. It is the Windy City’s good fortune that Broadway in Chicago brought powerhouse pixie Annaleigh Ashford to the Broadway Playhouse to present her 54 Below showcase Annaleigh Ashford: Lost in the Stars for a one night only performance. Fitting as she opened this showcase with that very song from “Dreamgirls.” 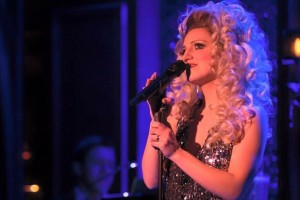 Backed with songwriter and musical director, Will Van Dyke, and the Whiskey 5 Band, Ashford treated us to a 90 minute array of musical genres. When belting “One Night Only” through the audience, Ashford  walked through the crowd shaking hands and blowing kisses, then humorously and clumsily walked through an entire row of seated patrons. “Pick up your purses ladies, I’m coming through” she said, and then graciously kissed the cheek of the older gentleman who stood up at the end of that row to let her out to the stage.  Lost in the Stars celebrated the classic cabaret concept. Next up,  a 10 minute Donna Summer medley mash-up that would have made the Glee kids jealous.  Snippets from classic disco recordings “Love to Love you Baby,” “Hot Stuff,” “Bad Girls,” “She Works Hard for the Money,” and “Dim all the Lights.” Ashford then did a perfect split, center stage, wearing 4 inch rhinestone covered stilettos, while simultaneously belting out the tune “MacArthur’s Park” and wrapped with “Enough is Enough.” 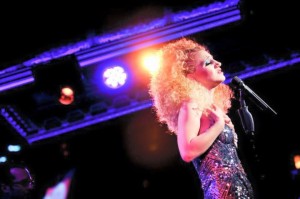 Annaleigh pulled up a stool next, took a seat, and vetted some musings of her life. She shared that Chicago felt like a second home to her. She mused her real life husband is from Gurnee. “Spelled exactly how it sounds” she quipped. Outfitted much like a disco ball herself, with a dress of silver sequins and tights that “looks like something I bought off eBay from Bangkok.”  With her big blonde lions’ mane hairpiece, and strategically placed rhinestone beauty mark, I thought she should quickly sign up for the next season of Dancing with the Stars. She certainly had the look down. This night fell on the first weekend of Spring, however it snowed in both New York and Chicago that weekend. She encouraged the audience to say “Hey Winter, Bye Felicia!” and then laughed when only half of the audience actually got the origin of the joke. Yes Annaleigh, you do have some “straight” fans in Chicago. They just weren’t sitting in my row. 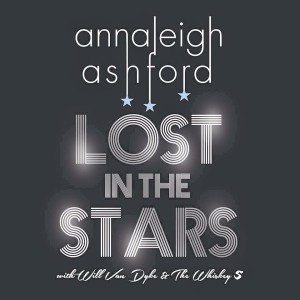 With her 5 piece band and a healthy sprinkling of proclaimed  “Gay Magic,” Ashford then treated the audience to a rendition of Cher’s “Love Hurts.” At the end she pondered aloud, “Dreams come true, except for the people on the Titanic.” Quick wit and powerhouse vocals, Ashford was on fire. She next amused with stories of her Denver grade-school track team. “I liked the costume more than the running” and pontificated on her early vocal couch Kit Andreé. Of Andreé, she recalled meeting a woman who “wore a set of false eyelashes that should only exist on the stage. And she wore them at 6:00 pm, in florescent lighting. On a Tuesday. I am wearing those same lashes right now.”  She spoke of how other little girls were singing hits of the 1990’s in their classes while her vocal coach had her doing detailed character motivation study exercises of Mama Rose from Gypsy and singing the entire Judy Garland at Carnegie Hall album. At age seven. Ashford then dazzled in a lovely musical tribute to her mentor, a stunning version of “Come Rain or Come Shine” with a little “Somewhere over the Rainbow” added to the exquisite mix. 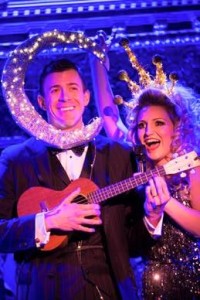 Switching gears from tender to silly, Ashford had the audience join her in a sing-a-long to Alanis Morrisette’s 1990’s hit, “Hand in your pocket.” We jingled keys as percussion instruments, while she pointed to highlighted lyrics for us to sing in unison or in a round. Alanis herself would have been tickled, I think. The cabaret continued with beautiful renditions of Elton John’s “Mona Lisas And Mad Hatters,” and some delightful musings on her latest Broadway show with James Earl Jones You Can’t Take it With You.

After a short video clip about the Sun (played by Ashford) and the Moon (played by Will Van Dyke) the next number was a whimsical tale in which the sun has to cheer up the sad moon. Dawning a light up, 2 foot tall tiara, Ashford sang while quite literally, orbiting herself around the moon. Not to be outdone Will Van Dyke sported a half crescent moon head piece as well.  This “Sun and Moon Lost in the Stars” number is the namesake of the show as well as an engaging ditty between two life-long buddies, one of which became a Tony Award-winning Actress.

Speaking of her Tony Nomination,  Annaleigh originated the role of Lauren from Kinky Boots so we were lucky enough to hear a story or two about working with the great Cyndi Lauper. Annaleigh did a spot on imitation of Lady Lauper leaving a voice mail wishing her luck on her Chicago Cabaret debut. Beginning by calling her “Annabelle” and rattling on,  like only Lauper does, the audience was left in stitches. Instead of singing her signature song from the show “The History of Wrong Guys”  she landed instead on the ballad “Take What You’ve Got.” Luckily,  we were not done with Lauper yet, as Ashford got the audience up on their collective feet to sing and dance to Lauper’s 1980’s celebratory anthem “Girls Just Want To Have Fun!”

Ashford treated us to an encore of two more engaging ballads “Lost Out Here in the Stars” and from Wicked (she played Glinda here in Chicago for almost a year) “For Good.” What a fabulous night of music and comedy from a remarkable emerging talent. Annaleigh is reportedly taking this show next to both Las Vegas and San Francisco! I highly recommend getting “Lost in the Stars” that is Annaleigh Ashford! Leaving her entertained audience (still all on their feet with enthusiastic applause) with one final thought for the burgeoning springtime. “Open your hearts…………and wash your hands!” This sprightly little livewire delivered, big time.