Annie at The Hollywood Bowl

Annie at The Hollywood Bowl

(Disclaimer: I knew some of the performers in this show before Annie opened.) 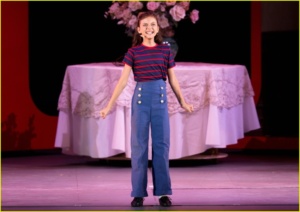 Leapin’ Lizards! This summer’s Hollywood Bowl musical was none other than one of the most popular family musicals ever written, Annie. Originally running on Broadway in 1977 for nearly six years, this show is nothing short of a classic. Most productions bring nothing new to the show, while this charming version directed by Broadway veteran Michael Arden (Spring Awakening, Once on this Island)brings a freshness and charm to this beloved show.

The only three night phenomenon rocked the enormity of the Bowl the night I went. Upon entry to the Bowl, the first thing you see is a giant red set of letters spelling out “Annie” on stage. While I thought that this was just for the overture, you eventually see that each letter was a part of the set. This was one way that set designer Dane Laffrey truly brought ingenuity to this run. The “A” turns to reveal Annie’s little spot in the attic with the orphans in bed below.

Leading this cast was newcomer Kaylin Hedges, who immediately brought a charismatic charm to the scruffy little orphan. These kids were unlike any I’ve seen in a long time. Eamon Foley’s delightful choreography brought dance training to meet what any normal kids would do when dancing and playing around when it came to the orphans. The vocals of these children were stunningly clear, thanks to the music direction of Todd Elison I’ll be the first to admit that I’m usually not a fan of children’s ensemble voices, but these kids pleasantly surprised me.

A true standout in the orphan ensemble was the adorable Malea Emma Tjandrawidjaja as Molly, the youngest of the orphan crew. She had this vivacious energy that just made everyone want to giggle and give her a squeeze.

The most well known song, Tomorrow, comes early in the show. Miss Hedges’s rendition was heart-wrenching and powerful. Not only does this pint-sized actress act the part of Annie flawlessly, she has the robust vocals to carry this show with ease. Watch out, Broadway! 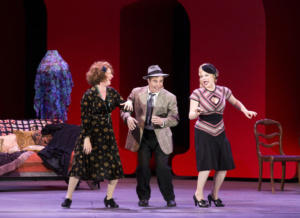 Ana Gasteyer absolutely floored me as the old spinster, Miss Hannigan. Whenever I see this show, I always find myself comparing the actress playing Miss Hannigan to Carol Burnett’s rendition in the classic movie. Miss Gasteyer’s version was by far the closest I’ve seen, largely because she was more willing to go over the top with her drunkenness and physical comedy. Her “Little Girls” had powerhouse vocals and hilarious physicality. 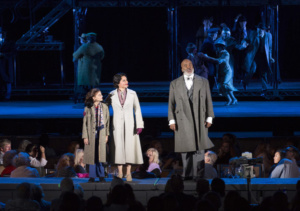 Soon, we meet the elegant Grace Farrell, played with a cool collected nature by Lea Salonga. You truly believed the friendship she had with Oliver Warbucks (David Alan Grier). Her voice is as stunning as I remembered, hitting every note with ease. Grier played Oliver with a gruff temperament, which worked very well for the character. You truly saw him shed his tough skin around this adorable little child.

One of the other standouts was Megan Hilty, playing Lily St. Regis alongside Rodger Bart’s Rooster Hannigan. I only wish there was more for these two to do in the show. Every moment they were on stage was captivating. I appreciated the fact that Bart decided to play Rooster more as a bad conman instead of a hardened criminal. Often times, there is the implication that Rooster and Lily are going to kill Annie once they get the $50,000, but Bart said the line with a casual air, which made him much more likable (and much less scary for the many kiddos in the audience).

While the stars truly shined, so did the fifteen-person ensemble. Their vocals were crisp, dance moves sharp, fun to watch, yet not distracting. They were the perfect ensemble for this show.

Arden (and the rest of creative) truly nailed this classic show this past weekend. The sun came up, and I’m glad I was there to see it. 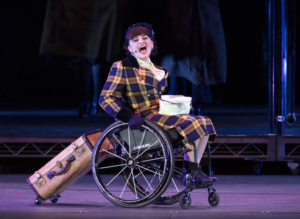