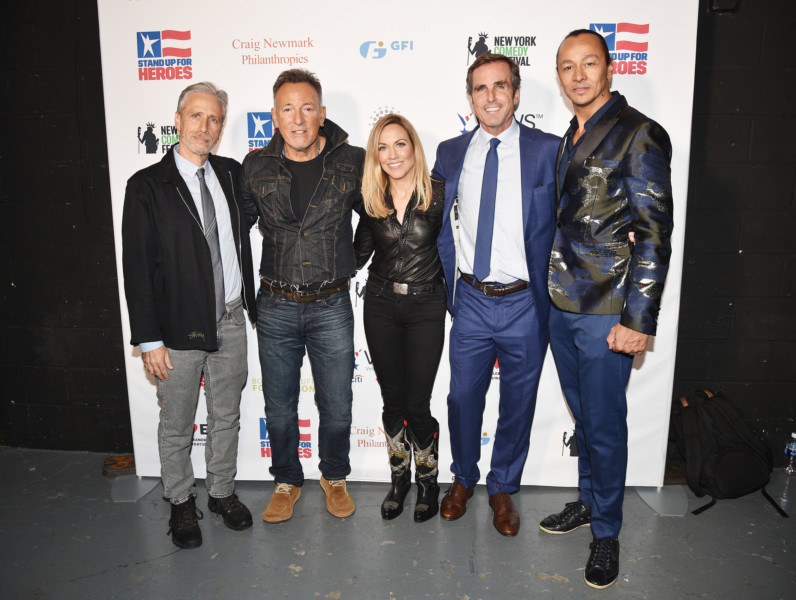 Stand Up for Heroes returned for its 13th annual celebration to honor our nation’s impacted veterans and their families on November 4th at the Hulu Theater at Madison Square Garden. Stand Up for Heroes was presented by the Bob Woodruff Foundation and the New York Comedy Festival and was brought to you by Veterans on Wall Street, supported by founding sponsor GFI Group Inc., Craig Newmark Philanthropies, and the Steven & Alexandra Cohen Foundation.

Ronny Chieng, Sheryl Crow, Chloe Flower, Hasan Minhaj, John Oliver, Bruce Springsteen, Jon Stewart, and Frédéric Yonnet took to the stage at Stand Up for Heroes for a once-in-a-lifetime evening of comedy and music to raise funds and awareness in support of the Bob Woodruff Foundation. The event raised over $5.7 million to support veterans and their families through the Bob Woodruff Foundation. SUFH kicked off the country’s largest comedy festival, which runs from November 4 through November 10, taking place at New York’s most prestigious venues and featuring performances from over 200 comedians in more than 100 shows across the city.

The honored guests for the evening, a group of over 60 veterans, service members, and their caregivers, sat in the front rows of the theater to enjoy the show.

The evening featured inspiring moments, including remarks from retired US Army Major Pete Way. Way, who lost his leg after being wounded while on deployment in Afghanistan, captivated the crowd with his story of resilience and gratitude. An avid mountain biker and proud father of two, Way thanked the Bob Woodruff Foundation for supporting the programs that allowed him to heal and thrive after injury. “At the end of the day, I think the message is pretty simple”, said Way. “No one can accomplish the mission alone.” In another highlight of the evening, Sheryl Crow invited Bruce Springsteen to join her for a duet of “Redemption Day.” Beyond the comedy and music, a live auction generated over $1 million in donations to support the Bob Woodruff Foundation’s mission.

In 2007, New York Comedy Festival founders Caroline Hirsch and Andrew Fox partnered with Bob and Lee Woodruff to create this special event as a tribute to wounded, ill, and injured veterans and their loved ones. To date, SUFH has raised more than $55 million for the Bob Woodruff Foundation’s mission to ensure that veterans, service members, and their families thrive in the next chapter of their lives.