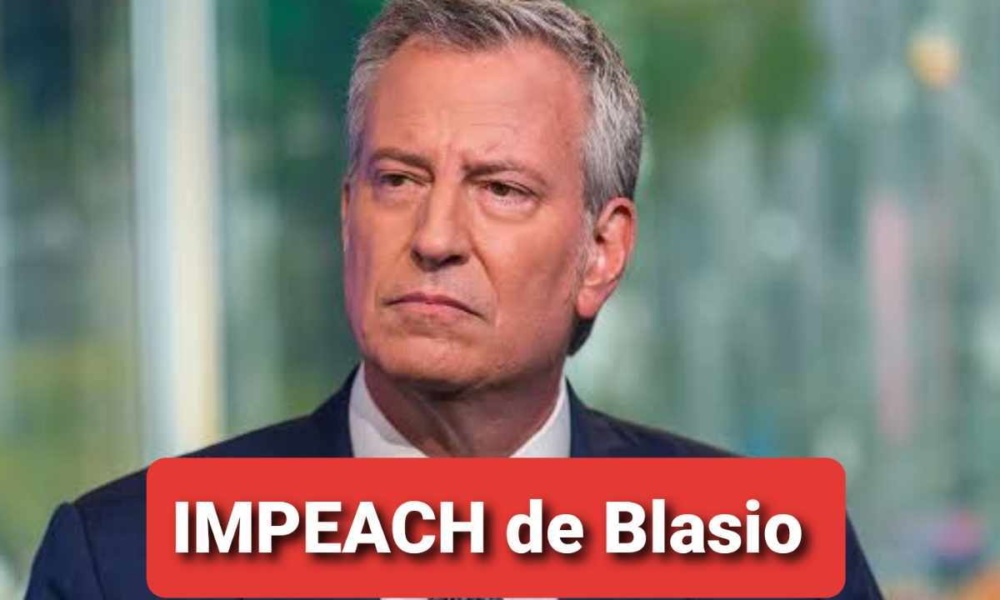 Another petition to sign to rid New York of this incompetent, corrupt mayor. Please sign this as well. We need to make our voices heard

Due to the illegal activity of your administration under widening investigation (including possibly a Class E Felony), the embarrassing debacle of the NY Primary Election, the people of New York City no longer find you trustworthy and suitable for the requirements of your position as Mayor of New York City. We demand your immediate resignation and we move to impeach you from office.

Why is this important?

Pertaining to recent criminal determinations by the CHIEF ENFORCEMENT COUNSEL OF THE DIVISION OF ELECTION LAW ENFORCEMENT, STATE BOARD OF ELECTIONS.

“I have determined that reasonable cause exists to believe a violation warranting criminal prosecution has taken place.” -Risa Sugarman, Board of Elections Chief Investigator

“There is considerable evidence in this case that New York City mayor William de Blasio organized a team dedicated to getting a sufficient number of Democratic New York State senators elected in 2014 to achieve a Democratic majority in the senate. The evidence indicates that de Blasio established a structure, both within and outside City Hall, and entered into an agreement with powerful unions… and political consultants… to raise and spend money to influence senate races,” wrote Sugarman, who was nominated to the post by Gov. Cuomo.

“The evidence demonstrates that the de Blasio team coordinated its fundraising activities with and intentionally solicited contributions for these candidates … in order to evade contribution limits and to disguise the true names of the contributors, conduct which may violate [two election laws],”.

Sugarman then cites provisions of the election law that say it’s a Class E Felony to “knowingly and willfully” solicit and or coordinate donations “for the purpose of evading contribution limits.” Other suspected violations of election law were misdemeanors.

Mayor de Blasio said on March 28 that he had only recently learned about a controversial deal to turn a Lower East Side nursing home into luxury condos, and only after reading about it in the press.

But a month before he made this statement, panicked officials at the highest levels of his administration were offering millions of dollars to undo the deal — aware that they had made a huge mistake, The Post has learned.

On Feb. 24, Deputy Mayor Alicia Glen’s chief of staff frantically offered a $16.1 million refund to The Allure Group, which had paid the fee to get a deed restriction lifted on the property at 45 Rivington St. The deed change allowed Allure to sell the property to a luxury-condo – developer for $116 million.
In return for the refund, Allure was told, the city sought a long-term care facility or affordable housing, according to a source close to the negotiations and evidence reviewed by The Post.

The obscure Brooklyn company at the center of a City Hall scandal already owed millions of dollars in unpaid taxes, and its principals were accused of “secretly scheming” against a former business partner, long before the city signed off on a sweetheart deal that netted the firm a $72 million profit, records show.

The Allure Group, a cadre of young, seemingly disparate entrepreneurs, has been on a buying spree, snatching up nonprofit nursing homes across the city and turning them into for-profit cash cows.

Mayor de Blasio’s office arranged for a nonprofit fund to loan $1.36 million to four private pre-kindergarten programs too troubled to get city contracts. Now it wants to use taxpayer money to repay the loans.

Education watchdogs say the mayor side-stepped procedures that guard against waste and abuse by asking the Fund for the City of New York to finance the faulty pre-K vendors.

“It’s like using a slush fund to avoid their own procurement rules,” said Patrick Sullivan, a former member of the Panel for Educational Policy, which votes on Department of Education contracts.

Bill de Blasio and his team brazenly ran political campaigns straight out of City Hall, according to state investigators.

The big-money donors would cut six-digit checks to county Democratic committees, which would then send the money to the campaigns, thus circumventing legal caps on contributions.

“The entire fund-raising and campaign operation was run from City Hall by de Blasio staff,” read the stunning findings by Risa Sugarman, chief enforcement counsel for the state Board of Elections.

The blockbuster memo recommended the case be prosecuted by the Manhattan district attorney but did not single out who should be charged. A rep for Manhattan District Attorney Cy Vance Jr. declined to comment on Saturday.

While Sugarman’s memo focused on the evasion of contribution limits, it also raised the shocking spectre of violations of city conflict-of-interest laws, which prohibit public servants from helping political candidates while working on the taxpayer dime or on city equipment.

“I don’t ever recall reading or hearing about anything like that — someone saying the mayor of New York raising campaign funds right out of City Hall,” said veteran New York political consultant and former Ed Koch aide Jerry Skurnik. “This would be a first in my memory.”