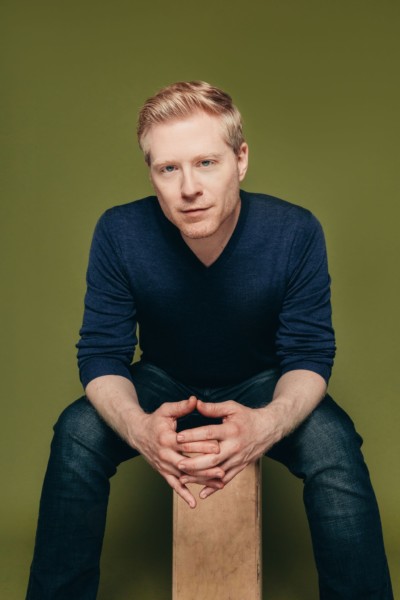 Royal Family Productions will bring Anthony Rapp’s acclaimed one-man show, Without You, back to New York City. This piece is written by and stars Anthony Rapp (“Star Trek Discovery,” Rent, RFP: Nobody Suspects a Butterfly), with direction by Steven Maler and musical direction by Daniel Weiss.  Without You will run four performances only April 19-21 at Royal Family Performing Arts Space (145 West 46th Street, 3rd Floor). Tickets are $50-$250 and can be purchased by clicking www.RoyalFamilyProductions.org

In 1994, Anthony Rapp was working at a New York Starbucks and about to audition for a new musical by a young aspiring writer named Jonathan Larson. This is where Without You begins. Rapp shares his audition for Rent, getting cast, rehearsals, and his view from the stage during the tribute performance on the night after Jonathan’s tragic death.  Without You also details Anthony’s achingly beautiful relationship with his mother during this turbulent time. Featuring Anthony’s own lyrics and melodies, stories adapted from his memoir, and the landmark songs of Rent, Without You is a valentine to the groundbreaking musical and celebrates all of our seasons of love.

Anthony Rapp has been acting and singing professionally since he was nine years old.  He is best known for originating the role of Mark Cohen in Jonathan Larson’s Tony Award- and Pulitzer Prize-winning musical, Rent, for which he shared an OBIE Award with the rest of the cast.  He reprised his role in Chris Columbus’s film version opposite other members of the original cast and visited the role once more with original cast member Adam Pascal in a national tour of the show.  His Broadway credits include If/Then from Pulitzer Prize and Tony Award-winning creators of Next to Normal, the revival of You’re a Good Man, Charlie Brown and John Guare’s Six Degrees of Separation.  His Broadway debut was in Precious Sons with Judith Ivey and Ed Harris, for which he received an Outer Critics Circle Award and a Drama Desk nomination. Film credits include Adventures in Babysitting, School Ties, Dazed and Confused, Six Degrees of Separation, Rent, Man of the Century, Road Trip, Winter Passing, A Beautiful Mind. TV: The X-Files, Law & Order: SVU, and Psych. He currently plays the role of Lieutenant Commander Paul Stamets on the television series Star Trek: Discovery. In 2000, he released his debut album, Look Around.  He has performed his music in clubs and at colleges throughout the country.

Steven Mailer is the Founding Artistic Director of Commonwealth Shakespeare Company (CSC), where he has directed over 20 productions of Free Shakespeare on the Boston Common since 1996.  Other CSC works include Naomi Wallace’s Birdy, Ariel Dorfman’s Death and the Maiden, and the world premieres of Jake Broder’s Our American Hamlet and Robert Brustein’s The Last Will. For CSC he has directed readings of plays featuring Ruben Santiago-Hudson, Paul Rudd, Blair Brown, Anthony Mackie, Tony Shalhoub, Leslie Uggams, David Morse, and Jeffrey Donovan among many others.  He conceived and directed an evening of Shakespeare scenes, songs, and soliloquies performed at Boston’s iconic Fenway Park, featuring Mike O’Malley, Neal McDonough, Maryann Plunkett, Jay O. Sanders, Seth Gilliam, Zuzanna Szadkowski, and Jason Butler Harner. In collaboration with Google, he adapted and directed a virtual reality film of Shakespeare’s Hamlet, entitled Hamlet 360: Thy Father’s Spirit, starring Jack Cutmore-Scott, Jay O. Sanders, Brooke Adams, and Faran Tahir (currently available at  www.wgbh.org/hamlet360).  In collaboration with Boston Landmarks Orchestra, he directed A Midsummer Night’s Dream (featuring the music of Felix Mendelssohn), as well as concert stagings of The Boys from Syracuse and Kiss Me Kate.  For Odyssey Opera, he directed Maria, regina d’Inghilterra; other opera credits include the U.S. Premiere of Péter Eötvös operatic treatment of Tony Kushner’s Angels in America and Thomas Adès’ Powder Her Face (Opera Boston). He directed The Turn of the Screw for the New Repertory Theatre, Santaland Diaries and Chay Yew’s Porcelain for SpeakEasy Stage Company, Top Girls and Weldon Rising for Coyote Theatre, and The L.A. Plays by Han Ong for the American Repertory Theater.  He has been involved with Anthony Rapp’s Without You since its inception at the New York Musical Theatre Festival; it has been seen in Pittsburgh, Boston, Edinburgh, Toronto, London, and Seoul. Awards include Elliot Norton Award for Sustained Excellence; Best Production, Twelfth Night and All’s Well That Ends Well; Outstanding Director, A Midsummer Night’s Dream; Best Production, Suburbia; and Best Solo Performance, John Kuntz’s Starf***ers (also Best Solo Performance Award at NY International Fringe Festival). His feature film “The Autumn Heart,” starring Tyne Daly and Ally Sheedy was featured at the Sundance Film Festival.

Based in Times Square, Royal Family has been a creative incubator of original, humanistic plays for over a decade. Bravery and fearlessness are imperative to our process. Artists and audiences alike are challenged in a creative safe space to explore the humor and the tangled truths of the human condition. Our programs and productions give artists space at all stages of their careers.