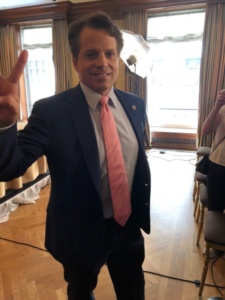 Scaramucci  moderates a special press conference with the “Trump Family” which will be led by film, television and stage star Gina Gershon, in the role of Melania Trump and the full cast of THE The 1st Annual Trump Family Special  – a new musical comedy that spoof’s the first family.

Trump’s brood has gathered to perform in a live televised event for the new Trump TV network. But when the orange man-of-the hour runs late, host Ivanka stalls by interviewing the various family members, which leads to a wide array of clever character songs.  And when they are “off camera,” we find out what the family’s really thinking…

Reminiscent of vintage TV family specials like The Partridge Family and The Brady Bunch, the show offers comic relief for these frustrating times – with a fresh perspective and fun-loving spirit.  A first rate cast delivers a cabaret evening you won’t soon forget.

Anthony Scaramucci is the Founder and former Co-Managing Partner of SkyBridge Capital. He is the author of three books: The Little Book of Hedge Funds, Goodbye Gordon Gekko, and Hopping Over the Rabbit Hole, a 2016 Wall Street Journal best-seller. Prior to founding SkyBridge in 2005, Scaramucci co-founded investment partnership Oscar Capital Management, which was sold to Neuberger Berman, LLC in 2001. Earlier, he was a vice president in Private Wealth Management at Goldman Sachs & Co. In 2016, Scaramucci was ranked #85 in Worth Magazine’s Power 100: The 100 Most Powerful People in Global Finance. In 2011, he received Ernst & Young’s “Entrepreneur of the Year – New York” Award in the Financial Services category. Anthony is a member of the Council on Foreign Relations (CFR), vice chair of the Kennedy Center Corporate Fund Board, a board member of both The Brain Tumor Foundation, and a Trustee of the United States Olympic & Paralympic Foundation. He was a member of the New York City Financial Services Advisory Committee from 2007 to 2012. In November 2016, he was named to President-Elect Trump’s 16-person Presidential Transition Team Executive Committee. In June 2017, he was named the Chief Strategy Officer of the EXIM Bank. He served as the White House Communications Director for a period in July 2017. Scaramucci, a native of Long Island, New York, holds a Bachelor of Arts degree in Economics from Tufts University and a Juris Doctor from Harvard Law School.

T2C asked about things that should be discussed openly and put on the table so we can heal. Non disclosures being ignored have an effect on everybody, as does illegally taping. Wrongs do not make rights.

Performances of The 1st Annual Trump Family Special run every Thursday at 9:30pm beginning on September 13th and running through December 6th  (there is no performance on Thanksgiving).

Suzanna BowlingNovember 19, 2022
Read More
Scroll for more
Tap
Jana Robbins and Haley Swindal Talk About Their New Show… The Songs of Kander and Ebb
The Temptations Are Headed To Broadway