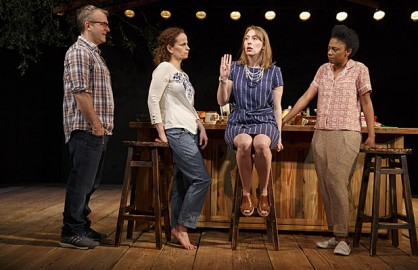 Antler Pneumatica Where The Past Hangs In The Air

Antler Pneumatica Where The Past Hangs In The Air 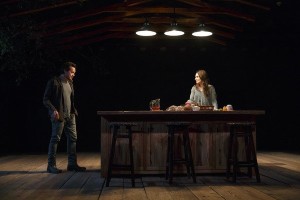 “You’re sort of everywhere,” once your ashes are scattered.”

Anne Washburn’s Antlia Pneumatica at Playwrights Horizons try’s to flesh out morality and who is living and who is dead. Think “The Big Chill” meets “The Ghost Whisper.” The plot you figure out almost instantaneously, the problem here is once you do, you don’t care. Like a lot of plays this season it involves cooking food. This time a funeral where the diseased is hardly talked about, instead we get banal talk about the stars and our existence.

Rachel Hauck’s set is rather simple yet beautifully lit by Tyler Micoleau. We are at Nina’s (Annie Parisse), father’s ranch in a remote part of Texas to scatter his ashes. Nina’s younger sister Liz (April Matthis) and their friend Ula (Maria Striar) are preparing the meal for the guests who keep cancelling. Len (Nat DeWolf) another guest shows up as Nina’s two kids and voices of those off stage are heard in the dark on speakers. Nina’s ex, Adrian (Rob Campbell) who Nina hasn’t seen for 16 years shows up out of the blue. He heard about the funeral from Don, who they all know has passed on, though Adrian says he is alive. When Bama (Crystal Finn) shows up ashes disappear and she seems to think that Adrian is also gone. Only the interactions between Nina and Adrian seem to resonate.

Director Ken Rus Schmoll does not help make this piece any more palatable. The good news here is the actors all radiate warmth and a realness, that makes this seem less like acting and more like peering through a slice of time.

Suzanna BowlingJune 18, 2022
Read More
Scroll for more
Tap
My View From The Camera: Opening Night: CAGNEY
And The Winners at The Oliver Awards Are………..