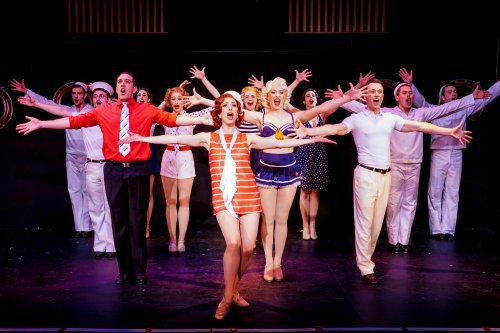 I’ve never been to one of the many offerings of Musicals Tonight, the not-for profit theatre company that dares to stage big time musicals on a budget that probably is as small as the intimate Acorn Theatre where they are currently sailing away with Anything Goes at Theatre Row. But as my friend and I strolled down 9th Avenue on our way to the theatre, we pondered the idea of this musical, one that I remember very fondly from Roundabout’s glorious production in 2011 starring the incredible Sutton Foster. She not only could sing the part like no other (click here to watch her on the Tony Awards), but could tap dance through that big huge number, “Anything Goes“, at the end of Act 1, and still, without losing a beat, belt out the big finale (ok, ok, she had a moment to catch her breath but only one small moment). I remember being astounded by the lung power of that lady, and was pleased she received so much press because many a Reno sang the number but left the tap dancing to the ensemble, waiting in the back for the moment to come out center stage and bring Act 1 to a close with the rousing last verse and big note finish. Foster, who won the Drama Desk and Tony Awards for Best Actress in a Musical, was not going to stand back and let that happen, no, she was going to be center stage, kicking and tapping with the crew, and still power out those last few lines of lyrics, with a lung full of air and a big smile across her face. (And to be honest, I also can’t get enough of watching Jonathan Groff do his own version at Miscast, click here to watch, which was basically a huge salute to Foster’s greatness, and in turn, his own. So much fun!)

My favorite musical diva, Patti LuPone did the part of Reno as well, back in 1987 (click here to watch) for which she won the Drama Desk Award for Outstanding Actress and was nominated for a Tony. She was my introduction to the musical and to Reno Sweeney, a performance that I, and everyone around me, fully enjoyed every time it played on the big video screen at Revolver Bar in West Hollywood back in the day.  And who wouldn’t love this 1934 ship-board farce with glorious music and lyrics by Cole Porter with the original book by Guy Bolton and P. G. Wodehouse, but heavily revised by the team of Howard Lindsay and Russel Crouse. There’s no denying the ride is a fun and festive night of high kicks and high jinxes on board this ocean liner bound for London. It is filled from ‘bow to stern’ with glorious and well-known classics by Porter, ones that will make you smile the moment they begin, so sit back, cause this is one smooth sailing across the ocean blue.

Billy Crocker, played by the handsome Nick Walker Jones (MT’s Oh, Kay!) is an absolute charmer, looking pretty darn good in a white tank top and suspenders, forced to stowaway on board in an attempt to woo the lovely heiress Hope Harcourt played charmingly by Beth Stafford Laird (WPPAC’s Sweeney Todd). The main problem is she is currently, and lovelessly engaged to the ridiculous Lord Evelyn Oakleigh, played by the brilliantly funny and nerd-ishly sexy Brian Ogilvie (Broadway’s Something Rotten). Jones is a joy to behold, especially when he starts out the lovely duet he has with Hope, “All Through the Night and Day“.  His voice is completely velvety and his focus clear, even with the hilarious trouble the production was having with the jail house bars behind them, falling and making quite the racket. Laird’s Hope is lovely as well, matching and melting in with his beautiful voice in the more difficult melody she has to play with. She gets her own moment in the moonlight with the very pretty “Goodbye, Little Dream, Goodbye” and “Easy to Love“, but for these two delightful actors, their chemistry is really on display in the most tempting kind of way with the delectable “It’s De-lovely“, a Cole Porter classic that will get stuck in your head (again) long after.

Also on board for the crossing is the main reason anyone comes to see Anything Goes, the sexy and flirty Reno Sweeney. She is portrayed very sexily by the perfectly cast Meredith Inglesby (Broadway’s Beauty and the Beast) who has the perfect wicked smile, long gorgeous legs, and curvy form for Reno. She gets to shine constantly during this toe tapping show, especially during her delicious rendering of “I Get a Kick Out of You“, “You’re the Top” (a fantastically silly and sweet duet with the wonderful Jones), and “Blow Gabriel Blow” (backed by the sexy duo of Becky Elizabeth Stout as ‘Charity Angel’ and Alexandria Van Paris as ‘Chastity Angel’). Ogilvie’s Evelyn and Reno get their moment to play with their deliciously fun “The Gypsy in Me” which is a pure pleasure to behold, but it’s during the hilarious and charming duet, “Friendship” with Public Enemy #13 Moonface Martin, played hilariously by Carlos Lopez (NLFT’s Guys and Dolls), that her (and his) comic chops are truly highlighted. At moments, I sometimes wish Inglesby’s voice had a stronger vocal quality and sound, but what she lacks in volume (I don’t believe anyone is mic’d), she makes up in charm and an engaging wry smile. But beyond all these numbers which focus the spot light on the delicious Inglesby, it is her Act 1 finale, “Anything Goes” that we all are waiting for, and the cast and crew of this ocean liner do a fantastic job turning that small stage into some big time fun and impressive dance moments. Thanks to the director and choreographer Casey Colgan (MT’s Bells are Ringing, Funny Face), the cast engulfs the teeny stage in a way that I didn’t think possible when I took my seat, tap dancing to all our hearts content. Magic, is all I can say.

To try to explain the details of the plot seems quite pointless, really.  It’s not in the details that we will find the fun, but in the joyful singing and dancing that Anything Goes really blossoms.  It’s not the shiniest of ships nor even close to the largest of decks, but it is obvious that the drivers of this ship are lovers of musical theatre (music director/vocal arranger: Christopher Stephens). The music sounds great, and each of these actors are having a great time playing these parts, especially because each character is given their delicious moments of pleasure. Mark Coffin (BAM’s The Dreyfus Affair) as the drunken good time older man, Eli Whitney, has the glorious “Let’s Misbehave” to entertain us as he attempts to seduce Hope’s mother, Evangeline Harcourt, portrayed hilariously by the wonderful Jan Leigh Herndon (A Chorus Line). Siren Jessica Moore effortlessly portrays the sexy gangster mole, Erma as if she’s the long lost twin sister of Leslie Ann Warren in one of my favorites, “Victor/Victoria” and brings this ocean crossing to a rapturous close with “Buddie, Beware“. The whole voyage is pure unadulterated joy and a delight to be on board.  Take that ocean liner crossing for a ride, it’s not the fanciest ship to sail across the ocean on, but no life jackets are required, it’s too delicious and de-lovely to ever want to jump off.