APAP And You Are There Part 2

APAP And You Are There Part 2 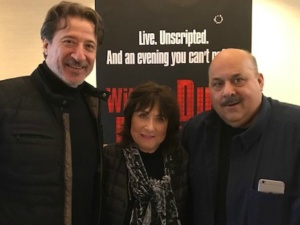 From the hit TV Show The Sopranos Showcasing their brand new live show “With All Due Respect” is Federico Castelluccio (Furio) and Jeff Pirrami (the fat rat bastard).

In the video you can see more of the highlighted shows.
The Association of Performing Arts Professionals (APAP) closed their annual gathering today with remarks by brilliant comedian and social commentator Bassem Youssef. In speaking about the industry’s responsibility in staying relevant and carrying the duties of artists as activists, Mr. Youssef said “….to make art that is annoying, destructive and unconventional, and to celebrate art, humor and the love of performance, know that if you are making certain people angry, furious, and uncomfortable, then know you are probably doing something right.” In its 61st year, nearly 3,500 arts professionals from nearly 30 countries and 49 U.S. states attended the conference, uniting around interests that support the strength and vibrancy of the industry. APAP|NYC returns to New York on January 4-8, 2019.
“We were excited to see arts professionals from all over the country and nearly 30 countries come together at this year’s APAP|NYC. Our strength as an industry lies in our ability to create, produce, present, share and stimulate audiences everywhere with works that both embrace and acknowledge our differences and increase our understanding of one another,” said Mario Garcia Durham, President and CEO of APAP.
The group also honored performing arts leaders at its annual Awards Ceremony. Winners are nominated by their peers for having had a significant impact on the industry and on communities worldwide. The winner of APAP’s Fan Taylor Distinguished Service Award for Exemplary Service to the Field of Professional Presenting was announced at the ceremony and honored Ann Rosenthal and Cathy Zimmerman of MAPP International Productions. MAPP International Productions was established in 2006 by Ann Rosenthal and Cathy Zimmerman as the successor to MultiArts Projects & Productions, the much-admired company founded by Rosenthal in 1994. MAPP was a nonprofit producer of challenging new work by contemporary performing artists focusing on raising critical consciousness and motivating social change from 1994-2017.
Arthur Mitchell, artistic director, choreographer, education and co-founder of Dance Theatre of Harlem received APAP’s Award of Merit for Achievement in Performing Arts. “The arts ignite the mind, and they give you the possibility to dream and hope. That is the thing everyone needs today – hope,” said Mr. Mitchell. He also added that APAP “is the entity that keeps us alive and the arts alive.” The William Dawson Award for Programmatic Excellence and Sustained Achievement in Programming was presented to globalFEST (Bill Bragin, Isabel Soffer and Shanta Thake, Co-Directors). The Sidney R. Yates Award for Outstanding Advocacy on Behalf of Performing Arts was awarded to Carlton Turner, artist, advocate and executive director of Alternate ROOTS.
North American Performing Arts Managers and Agents (NAPAMA) also presented two awards to its agents and presenters at the APAP event: the Liz Silverstein Award for Agent-Manager of the Year was awarded to Pamela M. Green, President & CEO, PMG Arts Management and the Presenter of the Year was awarded to Brett Batterson, President & CEO, Orpheum Theatre Group.
APAP members voted in new 2018 board members: Alicia Adams, Vice President of International Programming, The Kennedy Center (Washington, DC); Lulani Arquette, President and CEO, Native Arts and Culture Foundation (Portland, OR); Eddie Cota, Founder, Champion City (Los Angeles, CA); Beth MacMillan, Executive Director, ARTOWN (Reno, NV); Toby Tumarkin, Senior Vice President and Global Head of Artists & Attractions, IMG Artists (New York, NY).
See more about the conference at APAPNYC.org, @APAP365, #APAPNYC and facebook.com/APAPNYC. APAP membership information can be found at APAP365.org. APAP|NYC is also founding partner of JanArtsNYC, the most comprehensive annual celebration of the performing arts around the globe and annual convergence of 11 major performing arts industry forums and public festivals. 2018 event dates and descriptions of all 11 partnering events available at JanArtsNYC.org. Some of the 11 events will run beyond the timeframe of APAP|NYC again this year, through February 4.
Related ItemsAPAPBassem YoussefFederico CastelluccioJeff PirramiMagda KatzNewPaul RobesonTayo Aluko-Ward
Events

G. H. HARDINGSeptember 16, 2020
Read More
Scroll for more
Tap
APAP And You Are There Part 1
Pat Monahan From Train