Apologia or A Narcissist on Stage

Apologia or A Narcissist on Stage

“The thing I remember most about you is your absence.” Simon 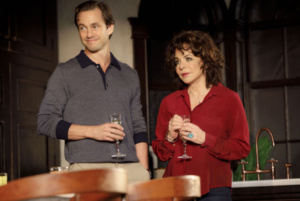 It is really bad for a show when we hate the lead character and find nothing about them redeeming. This is the case in Alexi Kaye Campbells play Apologia. 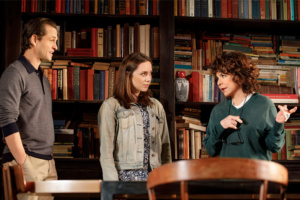 Kristin Miller (Stockard Channing) is a celebrated American art historian and left-wing political activist who has disappointed the two people in her life she should have cared about the most… her children. This is a woman who, despite the fact says she did it to advance humanity and women kind, has only done it for herself. It oozes from every fiber of her being. When her son Peter (Hugh Dancy) brings home his fiancé Trudi, (Talene Monahon) an American, all she can do is snipe at her and take swipes at everything she says. Kristen is like a cat with claws in her criticism. One wonders why the chatty, clueless Trudi doesn’t take a swipe back just to shut her up. When Kristin thinks Trudi has turned her son into a born-again Christian, the level of Kristin’s wrath goes up another notch. The two have come to announce their engagement but to also celebrate Kristin’s birthday. The rest of the guests include Hugo (director John Tillinger), Kristin’s gay best friend for 40 years and her comrade in demonstrations against the establishment; Claire (Megalyn Echikunwoke), a soap-opera actress and lover of Simon (Dancy) Kristin’s depressed son. If we thought Kristin was horrible to Trudi, she goes full force on Claire so that you wonder how, if at all, Simon’s and Claire’s relationship has lasted even one day. 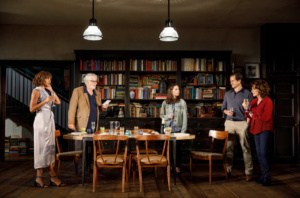 During the evening, we learn that Kristin’s husband took her children from her when they were young. After meeting Kristin, we completely understand why. Kristin has just written her memoir and has excluded her children. The pain of this has brought back how they felt when she abandoned them after they had been taken away by their father. Wine is spilled on a $2000 dress, a nail is found in the food, Simon is missing, and Kristin blames Claire. Peter, fed up with it all, explodes, telling his mother that Simon’s depression is caused by the fact that not one sentence even mentions him or his brother. Instead of apologizing, Kristen makes excuses. She blames Peter for being a banker and not being the person she wants him to be. She projects, manipulates, and is judgmental. All of the characteristics of a sociopath.

In Act Two, we meet Simon (the fabulous Hugh Dancy again) who is so broken, our hearts break for him. Despite his mother’s strong personality. He informers her of the day he felt invisible to himself and the world. I will not spoil the memory, but all during it Kristin only thinks of herself. She never connects with him or hears what he is saying, and just when she might have to take responsibility, again instead of apologizing, she tries to tell him something that if he didn’t already know, could have pushed him over the edge.

The next morning, Trudi tells Kristin she understands her and the person she has to forgive is herself. As the guest leave, Kristin screams like a wolf in pain, cries, then gets over it.

Stockard Channing is a force of nature. She created this role in London and has such a tremendous energy running through her, she is fascinating to watch. Monahon’s Trudi is a bit screechy and seems in a different play. Tillinger is delicious, Ms. Echikunwoke perfectly cast, but it is Dancy who is the revolution. Having not read my program until later, I did not realize he played Simon until later and was quite annoyed he didn’t get to take a bow. His Simon is the most touching moment in the play.

Daniel Aukin’s direction seems to hinder the plays progress in Act One, which seems hours long. In Act Two, the scene between Simon and Kristen will seriously affect you, but then when morning comes, again the staging doesn’t seem to really fit.

Alexi Kaye Campbells play seems to miss the mark. If Kristin is supposed to be lauded as a woman winning her freedom as she dedicated her life to activism and social reform, doesn’t this first start with our children? When Simon tells her how she has made him feel and why, wouldn’t a loving person try to make amends? Instead, she tries to land another blow to take the blame off herself and cast it onto Claire. She blames everybody but herself.

Karl Marx hangs over the toilet, but he used to have a more promenade position in the house. I think that says it all.