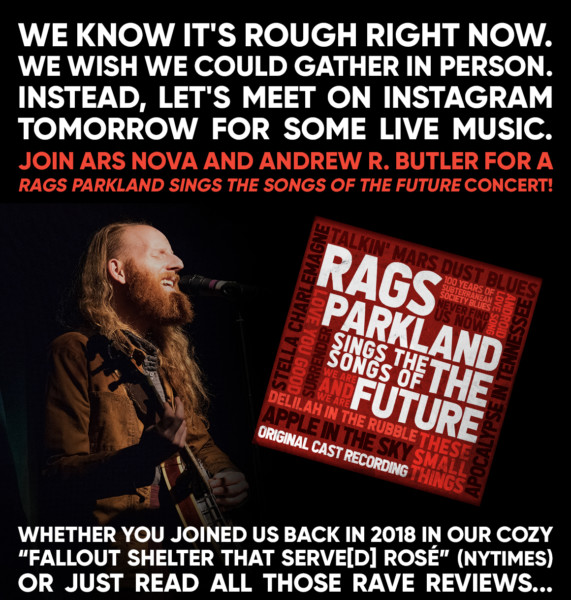 The show takes place in 2268, as a lone folk singer named Rags Parkland (Butler), home on Earth after a stint in a penal colony on Mars, performs at his friend Gill’s subterranean Virginia club. Between songs, Parkland reminisces about his time in prison and his romance with his former bandmate, Beaux Weathers (Stacey Sargeant). Parkland’s songs are largely covers of songs by his old band (Jessie Linden, Debbie Christine Tjong, Tony Jarvis and Rick Burkhardt) The Future, and during one song, the scene shifts to some years in the past when the full band is performing that same song at the same club. Parkland, Weathers, and The Future reveal a world through their performance in which partially constructed and fully constructed humans are illegal. All members of The Future except for Parkland are, to varying degrees, constructed, yet continue to play music underground as a way to pass along their shared history and hope.

A perimeter warning light alerts the club that a raid is taking place. In defiance of the ban on constructed humans, Weathers and The Future play on against the raid, effectively giving themselves up, while Parkland shrinks back. The scene shifts forward in time to Parkland and Gill in the Virginia club. They reveal that Weathers and the rest of the band have not been seen since that day and Parkland indicates that he intends to keep sharing their songs and spreading their story.

You can pre-order here.