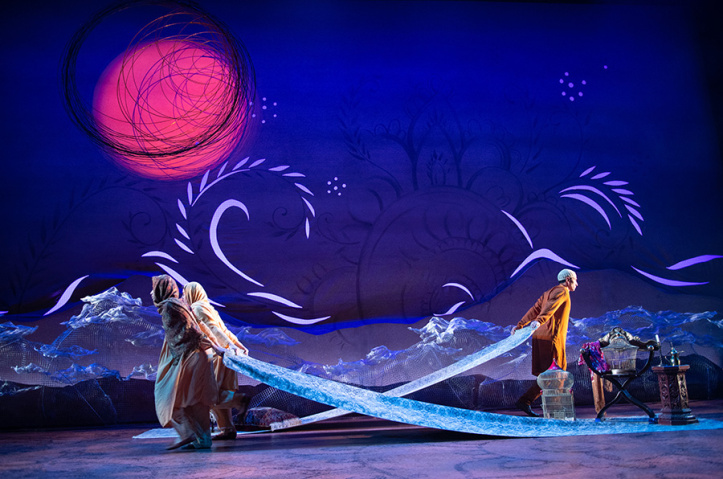 Based on the novel by Khaled Hosseini, the author of 2003’s “The Kite Runner“, Arena Stage marches forward his harrowing and informative A Thousand Splendid Suns to illuminate the horrific conditions women are subjected to in Afghanistan. Under the closing days of the Soviet occupation in the 1990’s and the reign of terror the Taliban cloaked the country in soon after, playwright Ursula Rani Sarma (Débris, The Ripple Effect) finds the details to adapt the novel in a somewhat too literally-minded translation to the stage. The piece does manage to instill and unwind the stark and difficult situations women find themselves ensnared in under the rule of law and walk out the dangers that exist outside, and inside the door of their home. They stand isolated and fearful, but decidedly determined to survive, for themselves and each other, but more so for their children and their complicated future. The bonds of maternal love and defiance will always exist, regardless of the violence and mayhem that surround, and in this sweeping story, directed with swift attention to the details of pain and love by Carey Perloff (Stratford’s Private Lives, Williamstown’s Ghosts), A Thousand Splendid Suns shines as hot and fierce as the metaphoric metal sun that glides over the Arena Stage. Just like that symbol of life, it illuminates with a hard bright twisted force the chaos these women and children must withstand and survive.

The mystical heaviness of tradition and religion are pulled slowly across the stage, courtesy of the fine elegant design of Ken MacDonald (Arena’s Newsies). It floats like the soon-to-be-outlawed kite across the structural dissected sky, brought to beautiful life by lighting designer Robert Wierzel (Broadway’s Lady Day…) alongside the detailed costuming of Linda Cho (Broadway’s Lifespan of a Fact), the strong sound design of Jake Rodriguez (OSF’s Between Two Knees), and the haunting original music written and performed by David Coulter (A.C.T.’s Hamlet). There is always time for poetry, it is said, before devastation blows apart Laila’s world. Hurt but still alive, Laila, determinedly portrayed by the earnest Mirian Katrib (Theatre Passe Muraille’s The Prisoner of Tehran), finds her status and life rearranged before her very eyes. She is forced by her second-class citizen status and her troubling predicament into becoming a child bride and a second wife to the manipulative neighbor, Rasheed, played by Haysam Kadri (Theatre Calgary’s Enron). The splendid tangled sun watches over the young trapped woman as she attempts to forge a new chapter, isolated in the man’s home with his first wife, Mariam, portrayed most engagingly by the wonderfully earthbound Hend Ayoub (Yale Rep’s Kiss). At first there is jealous competitiveness, but once another female presents itself into the home, in the form of Laila’s baby girl, Aziza, eventually played by Nikita Tewani (Soho Playhouse’s The Fall), the female bond of maternal love and survival is etched into their detail of the scarf and the burka, challenging the blood and death that threatens them from all around.

It becomes a waiting game, this play, as the restrictions against these women start to pile up on top of their already weighted shoulders. We know a crack in their landscape has to appear, but we hold on with them, somewhat too long, waiting as the threat rises and the dangerousness exposes itself. Director Perloff, assisted by choreographer Stephen Buescher (Tryptych’s Stockholm) try hard to create an atmosphere of dread and fear.  The symbolic images of two wives and a daughter holding hands covered from head to toe in the oppressive burka walking with the raging hot sun of Afghanistan bearing down on them flies with force into our hearts and minds. I wanted more of the symbolic and metaphoric within this production and its stylistic approach to terror, like the more skilled Broadway production of Indecent, and less of an allegiance to the text of the intricate novel. The first act feeds us the horrific dangers of bombs and guns, but fails to detail with gruesome honesty the horror and danger that lives inside of Rasheed’s house. He’s obviously not a good non-violent man, but his portrayal is almost too humane. The violence comes later in Act Two, and even that doesn’t sting as much as it could. “Where there are men, anything is possible“, and although the oppression rings solidly true, except for the kind and loving young Tariq, affectionately portrayed by Antoine Yared (Soulpepper’s A Christmas Carol) who seemingly disappears into the mountains packing with him all the hope and trust of the young innocent Laila, it doesn’t sink in beyond the intellectual and factual. We see the utter fear of a mother’s ferocious determination to keep her child from harm’s way, but the monumental and hindering threat of violence from outside and within doesn’t rise up as hot and hard as the wirily Afghan sun. The cast and crew do a fine job layering and entwining the historic story-telling trauma with the present horror story inside my mind’s eye, but the mystical and the spiritual squeeze never fully causes havoc in my heart.

Mariam’s story is the one most fully formulated and played out with an emotionality that lingers, particularly as her damaged and discarded mother, diligently portrayed by Lanna Joffrey (Cervantes Theatre’s Eyes of the Night) watches on. Her mother has witnessed first hand the way men can banish and tarnish a woman after he is done getting what he wants, specifically Mariam’s father, the well-off handsome Wakil, dutifully played by Jason Kapoor (off-Broadway’s Ideation). So she can only warn her wide-eyed daughter of the oncoming betrayal, never offering support or encouragement against the onslaught of pain that must be endured, only a framework of dishearteningly determination to withstand the violence that will most likely come her way.  It’s a tremendously powerful landscape that this team has carved out; detailed and literal, informing and illuminating, but somehow it misses the squeeze of the heart and the terror of the blazing sun. It ends with a blazing flash of white light backed by a firing of a bullet that releases them from further pain and harm. It’s inspiring and authentic, just not as emotionally connecting as I had hoped for when looking into the Afghan horizon.