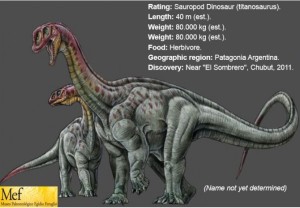 The skeletal model of the Titanosaur was unveiled this morning at the American Museum of Natural History. Created by Research Casting International the Titan is made of a lightweight fiberglass, stuffed with foam and connected by steel bars. It was a result of collaborations between paleontologists at Trelew-based museum and a team at scientists at the American Museum. Plaster casts of the original bone were used to create “bones” of the skeleton model. Advanced techniques like scanning and 3-D printing were also used. 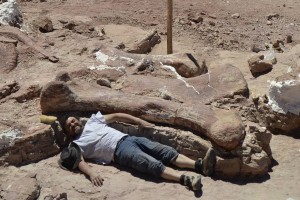 The Titanosaur replica weighs in at about 70 tons, stretches about 122 feet long and 17 feet tall. Its pelvis could hardly fit through the museum garage’s doors. The 19-foot-high ceilings of the display area were not quite big enough to fit the Titanosaur so his head and neck twist out the doorway with his tail reaching the very length of the space. Analysis of the leg bones show that these weren’t the adults but teenagers still growing.

The Titanosaur was a plant eater and lived about 100 to 95 million years ago, during the Late Cretaceous period. José Luis Carballido, a dinosaur specialist and team leader in the study of these specimens, who works at the Egidio Feruglio Paleontology Museum, stated; “It’s a real paleontological treasure. There were lots of fossils in great preservation, practically intact, something that does not happen often. In fact, the remains of giant Titanosaurs known so far are scarce and fragmentary.” Found The Titanosaur’s remains were excavated in the Argentinian desert near La Flecha, in the Patagonia region. One enormous femur was found at the site and will be among five original fossils temporarily on view with the Titanosaur.

The dinosaur is so new he hasn’t been truly named. Titanosaur” is more of a nickname. The Argentine paleontologists are currently waiting for the acceptance and publication of a scientific paper that has already been submitted, and which would provide an official name to the dinosaur. Mr. Pol said the following: “If the name goes out before the paper, then the name becomes invalid. Those are the rules of zoological nomenclature.”

An upcoming documentary on the BBC, Attenborough and the Giant Dinosaur, is scheduled to be aired on January 25, follows paleontologists as they uncover fossils and more than 220 bones and 80 teeth of the dinosaur.