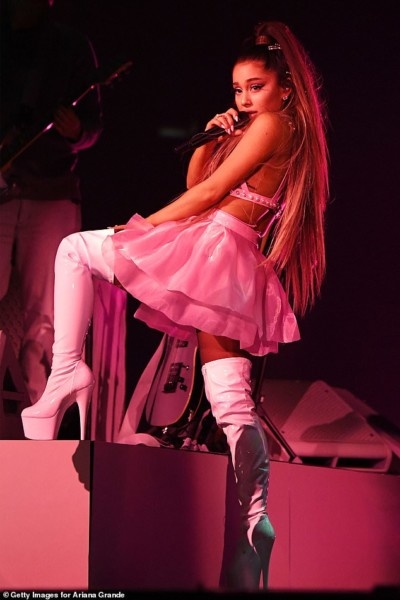 Ariana Grande opened her performance with “God Is a Woman” followed by “Bad Idea,” the single off her latest album thank u, next.

“Break Up With Your Girlfriend, I’m Bored” had NSYNC join with “It Makes Me Ill” from their 2000 album, No Strings Attached. Lance Bass, JC Chasez, Joey Fatone and Chris Kirkpatrick all joined Grande on stage. No surprise missing was Justin Timberlake.

Together they performed the 1997 classic, “Tearin’ Up My Heart.”

“7 Rings,” “Love Me Harder,” “breathin,” “needy,” “Right There”  and “Break Your Heart,” and then Diddy made a special appearance to sing “Mo Money Mo Problems” with Grande singing the Faith Evans’ verse.

Last year Grande she joined Norwegian deejay Kygo’s to perform her hit “no tears left to cry” and a cover of Marvin Gaye’s “Sexual Healing.”

Grande’s has been touring her smash Sweetener World Tour, which kicked off March 18th in Albany.

She also opened a Pop Up shop with all things Ariana.

Suzanna BowlingJanuary 11, 2023
Read More
Scroll for more
Tap
6 Ways To Make Your Mother Feel On The Top Of World This Mother’s Day
Herbie Hancock Comes to the Beacon Theatre