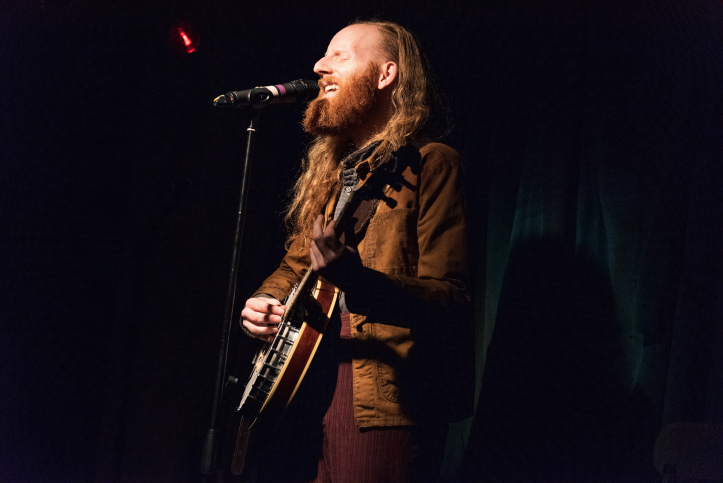 Step back in time to the dust belt of American Folk music, and then strap in for a quick flight forward in time to a creation that resembles a rebel bomb shelter aptly called the Over/Under in Richmond. Lucky for all, you’ve entered the world of Ars Nova’s provocative and devastatingly smart new musical, Rags Parkland Sings the Songs of the Future, and you will no doubt be blown away. And I mean that in the best possible way as I attempt within this review to reveal nothing except an idea of the electric magnificence that explodes from that cramped stage. We all sit back and watch a meek and sweet Rags Parkland, played by the hillbilly look-a-like Andrew R. Butler (Finn The Fearless) overflowing with shy magnificence make his way up onto the slight performance space and introduce himself. He has come up from deep below to play some songs for us and for his own aching heart. He’s got his banjo and harmonica at arms reach, and a story to tell about the end of the world and the ‘Apocalypse in Tennessee‘. If Bob Dylan were alive 300 years from now, this show, with book/music/lyrics by the same man standing before us, might have been this exact same tale he would have written to tell this story. It’s a deeply immersive weaving of rebel politics and simple passion for existence sung from a futuristic time. It’s drenched in old American folk music directed with style and emotional connectivity by Jordan Fein (Bushwick Starr’s Singlet) giving us all a wickedly smart and thought-provoking intergalactic miracle that would make Woodie Guthrie and Dylan proud.

He starts this one-night-only gig storytelling through song. He opens with a tale about the first time Rags left the planet, and with that, we know quite quickly that we are in a different time and a different place. It’s masterful, how writer Butler slips the knowledge of Parkland’s current situation out to us, drop by drop, never overwhelming us with detail, but rather with sweet engagement. The story envelopes, about the first time he willingly stowed away on a spaceship and it turned out to be a colony searcher going on a six-year mission, and the problematic life that followed. He poetically weaves a story musically around and about a time when he became an enslaved laborer on Mars, working to create a new world, and how he met his guiding light, the singer Beaux Weathers. He glistens with emotional longing as he brings forth her memory vividly when he sings a song by a folk singer named Octavia Phillips. “One of Beaux’s favorites, and one of mine. We both grew up listening to this song, and we each played it in our own shows before we met. I like to think it brought us together. She had a hell of a version of it that she did with The Future. I wish you could hear her sing it.” We gladly share in that memory dance as he thoughtfully ensnares us more deeply than we realize in the transformational moment of vivid memories and emotions.

The set is perfection in its decay. When I walked in, I first thought that the space was a run-down converted office space with ceiling panels amateurly cut away to hang lights, but once the show hits its higher plane, I wondering if it isn’t the most spectacularly inventive scenic design by Laura Jellinek (2ST’s Mary Page Marlowe), with exacting modernist folk costumes by Andy Jean (Flea’s Scraps), detailed and creative  lighting by Barbara Samuels (PH’s Dance Nation), and solid and enhancing sound design by Mikaal Sulaiman (PR’s Rape of the Sabine Women) that I have seen in a long long time. It’s so decidedly worn and dynamic, that one can almost smell the revolution and rebel yell existing all around. That being said, I was a bit worried after the third compelling solo song, ‘Stella Charlemagne‘ that this would just be a beautifully sweet stage show about memories and longing. That we would have this lovely man center stage for the whole 90 minutes gently rocking us through his deeply emotional journey through life. It wouldn’t be a bad way to spend the evening, I can tell you that, but not the most invigorating either. And then, just as that thought flipped casually through my mind, right when I needed an injection of something else, there was a rumble and a flash. The ground seemed to expand underneath and over above into something forever life changing and time altering. “We’re all coming together babe. You, me the ocean and the sky“, and just in the nick of time. “There’s a brighter morning coming“, and that reverberation is heard strongly and vibrantly all around, flying forward in the illegal intelligence and power of Beaux Weathers and The Future.

Rags has been planning on performing his revolutionary songbook for us all to engage in, but he alters his path, decides he has done wrong, and is determined to carry himself and us to the time and place where we can rebel with the intoxicating Beaux Weathers, played with ever-elevating greatness by Stacey Sargeant (Delacorte’s The Taming of the Shrew). She springs alive for us, taking us back to a moment of cherished gloriousness that has lived inside Rags like a strong light and deep cut. When the music club impresario, Gill, played with quirky charm by Tony Jarvis (Public’s Miss You Like Hell) starts to play his mean saxophone in a manner that would make my own dad grin with glee, he welcomes back to the stage the return of a pack of musical powerhouses: the hippy non-human Rick on Accordion (Rick Burkhardt), the deliciously graceful Devo on Drums (Jessie Linden) and the electric Ess Pinvint on Bass (Debbie Christine Tjong) to help Beaux and Rags deliver us all to our perseverance. The talent that springs forward out of the lighting flash is astounding, especially with the vocal chords of Sargeant, who keeps raising the bar higher and higher up from the underground to the spectacularly dark heavens. She’s a revelation and a revolution packed tight together in a ball of compassion and depth, but so is the accordion playing Burkhardt, who sings a song so captivating and engaging that my heart aches for his android soul. The bass guitar-playing Tjong rocks your protest socks off with a clear and precise power and Linden on drums is wordlessly deliberate and excitingly graceful. The total energy of the moment is infectious and exhilarating like nothing I could have imagined when I first entered that space. The details are precise but worth holding onto with careful privacy for the surprise waiting for all customers to the Over/Under is worthy.

With the whole band being credited with orchestrations, arrangements, additional music, alongside musical director, Madeline Smith (Atlantic’s 1001 Nights) and Maya Sharpe, Rags Parkland Sings the Songs of the Future never lets up. It’s an awe-inspiring evening of engagement and deliberation, seeped in connection and dynamic power. When that singular bulb of light does turn on signaling possible trouble brewing, the whole room vibrates with tension, holding our collective breath wondering and caring with all of our hearts what the future has in store for these pioneers. The look on the band’s faces under that singular warning light says it all. They huddle terrifyingly together and trembling, making the heightened importance of this evening’s act of brave uprising and engagement sink in deep into our entirely human souls. “Everyone loves a love song, right?“,  and the only answer that can be given to that and the whole masterful piece of theatre is a solid and resounding yes, please….. with the shy Rags adding, “I think“.

Genevieve Rafter KeddySeptember 14, 2022
Read More
Scroll for more
Tap
The McKittrick Masquerade Inferno is Back For Halloween
He Says: Apologia: The Definition of Brilliance, With No Need of Any Apology