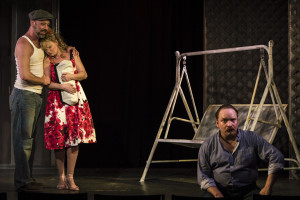 2 By Tennessee Williams stars Art Garfunkel wife and mother of his child, Kathryn Luce Garfunkel. The evening of these two short one act plays: the 1946 27 Wagons Full of Cotton from and the 1968 Kingdom of Earth. Here the men are  misogynist and see the women who are week willed as tools for their own pleasure and use.  27 Wagons Full of Cotton was adapted into the controversial 1956 film Baby Doll. Kingdom of Earth whose title changed to The Seven Descents of Myrtle played on Broadway in 1968. The show was produced by David Merrick, directed by Jose Quintero and closed after 29 performances. It starred Brian Bedford, Harry Guardino and Estelle Parson who was nominated for the Tony Award for Best Actress in a Play. 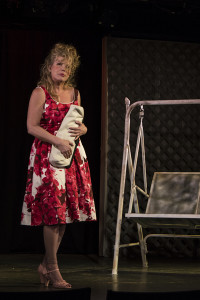 27 Wagons Full of Cotton is set in 1946 Mississippi. Jake (Mike Keller), is a cotton gin owner, who has hit hard times thanks to a syndicate rival who has his own mill. Jake burns down the mill of Silva Vicar (Justin R G Holcomb), who knows what happened but cannot prove it. Silva seeks revenge by raping Jake’s young, frail, delicate wife, Flora (Kathryn Luce Garfunkel) who has a hard time resisting especially since Jake has told Silva of the good neighbor policy. Both the men do a perfectly adequate job but it seems the roles should be reversed. Ms. Garfunkel looks and sounds the part, but she misses every nuance of who this character is. This is a girl who can not resist a soft touch or one that will hurt. She is trapped in her own sexuality and unable to move past the inevitable. Ms. Garfunkel  is more like a one trick pony who needs to peel down to the essence of who this character is. If you watch the video of the Hallmark Hall of Fames version you will see an amazing performance by a young Leslie Ann Warren. 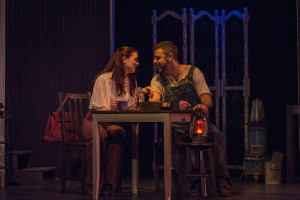 In Kingdom of Earth, we meet Chicken (again Keller), whose decaying house is under siege by an incoming flood. He is dim witted, blunt, self isolated, but cagey enough to know how to turn things his way. When his older half brother Lot (Holcomb) returns to his ancestral home dying from tuberculosis and bringing his new bride Myrtle (Judy Jerome), a sometime prostitute, former showgirl, the sole survivor of the Five Memphis Hot Shots, Chicken has some deciding to do. As the flood waters rise so does the feeling of claustrophobia as Chicken learns his brother only married two days ago and that was most likely to keep the home from Chicken, who has worked and fostered the home, as his brother went to the big city. The house is only safe until old man Sikes down the road dynamites his levee to save himself. Fearing for her life Myrtle who lives in a fantasy, relates to Chicken, who has the ability to help in more ways than one. Michael Keller, as Chicken is perfectly cast as he shoulders with animal instinct, a hurtful past and manipulation. He keeps the audience on their toes as they wonder what he will decide. Judy Jerome is in her 30’s and a beauty with real acting chops. She pulls off this piece but you they had reversed the roles as she seems physically more suited to Flora and Ms. Garfunkel more suited to Myrtle. Ms. Jerome is an actress to keep you eyes on.

Directed by Marilyn Fried, she succeeds more in bringing out Mr. Williams intent in the second piece and not so much in the first which is missing the sensual depravity that makes this one act so brutal.