Arthur Miller’s The Crucible a Tale of False Accusations, Greed and Mob Mentality 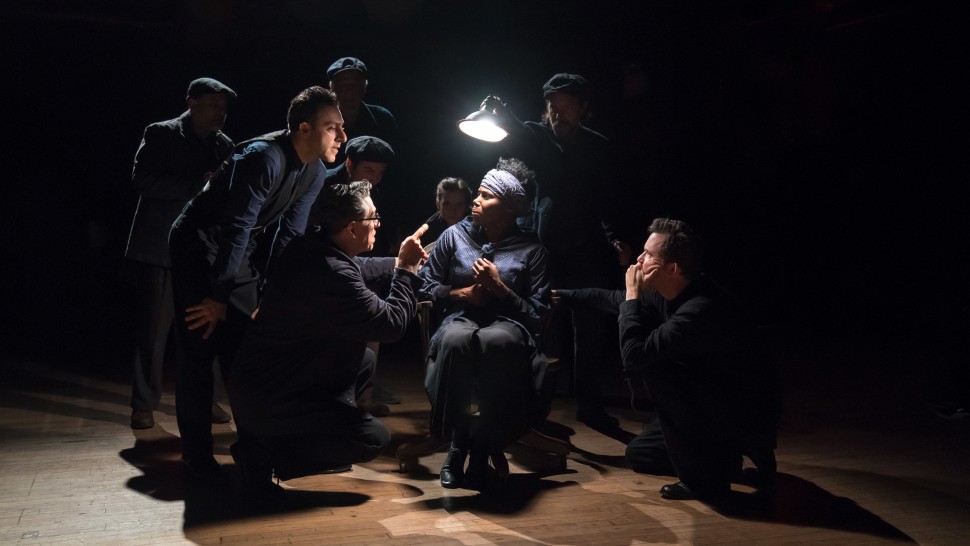 Arthur Miller’s The Crucible a Tale of False Accusations, Greed and Mob Mentality

I am grateful to Eric Tucker and Bedlam’s version of Arthur Miller’s The Crucible, as it erased the demonic Ivo Van Hove version. They claim it is a paired down version, actually it is a bare bones production that has you sitting on hard wooden chairs without cushions for over three hours. John McDermott’s set design utilizes these chairs as jail cells, as handheld lights by Les Dickert and simple costumes by Charlotte Palmer-Lane keep us in the era.

Here we play out the 17th-century Salem witch trials, which were based on the televised McCarthy hearings and seem like they could be plucked right out of today’s headlines. With 13 actors, a low key Tucker, not only directs, but plays Reverend John Hale, the man who signs the death warrants. The entire cast has been assigned as ensemble, though some of their acting stands out, others seem in another production.

The reason they were in the woods was Abigail, Parris’s ward was doing a spell to get John Proctor (Ryan Quinn) to leave his wife (again the fabulous Ms. Millonzi), who has come to regret his affair.

Abigail ends up accusing countless citizens of witchcraft, becoming one of the most powerful people in Salem. As she is about to be found out, she flees Salem with her uncle’s fortune rather than face the consequences of her actions.

Proctor, a decent man struggles to make up for his sins. Accusations were based more on property and hate, and the innocent chose their good names and death, rather than accept the lies Judge Thomas Danforth (Paul Lazar) and the court were asking for.

This piece is so timely and warns about mob mentality, the question is can we heed it’s message?

The Crucible: Bedlam in co production with Nora Theatre Company at The Connelly Theater, 220 East 4th St. until Dec. 29th.

Robert MassimiSeptember 13, 2021
Read More
Scroll for more
Tap
Einstein’s Dreams Where Time Is Everything
The Spirit of Christmas Lives on Broadway in A Christmas Carol