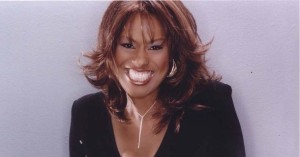 Jacob Langfelder in partnership with Arts-For-All, Jill Bernard and Rashad Chambers will present a one night only concert featuring TONY and Grammy Award winner Jennifer Holliday along with The Color Purple’s Rema Webb.  Julie James, host of Sirius XM’s Broadway Names with Julie James will host Ms. Holliday and others guests in this very special Broadway Names LIVE!  The concert will be presented at 42West located at 514 West 42nd Street between 10th and 11th avenues. The performance will take place Monday, January 18th, 2016 Tickets start at $50 and can be purchased at www.broadwaynames.eventbrite.com

Jennifer Holliday has been proclaimed a Broadway legend by critics and fans alike. Her show-stopping, heart-wrenching performance of the torch ballad And I am Telling You, I’m Not Going in the 1981 smash hit, Dreamgirls, is considered one of the all-time best performances in a Broadway musical. The iconic role made Jennifer Holliday a household name and introduced her big, soulful voice to the world.

Jennifer is showing the world a new musical look with her latest CD project, This Song Is You (2014, Shanachie Records). The album showcases her extraordinary vocal range and mastery of multiple musical genres.

Born and raised in Houston, TX, Jennifer went straight from the Pleasant Grove Baptist Church Choir to the Broadway stage. One Sunday, while singing in the church choir, she was discovered by dancer Jamie Patterson who was touring in the national company of A Chorus Line. Jamie set up an audition for Jennifer in New York for the show Your Arms Are Too Short To Box With God. During the audition with the show’s creator and director, Vinnette Carroll, Jennifer sang her favorite hymn, God Will Take Care of You and that He did.  She was hired for the show that same day.

Jennifer toured with Your Arms Are Too Short To Box With God and then made her Broadway debut with the show. Jennifer came to the attention of many theater luminaries and critics, most notably the renowned Broadway director and choreographer Michael Bennett, the creator of A Chorus Line. As soon as he heard her sing, he knew he wanted to work with her. He invited her to participate in an untitled project that he was producing.  Even though, at the time, Jennifer wasn¹t familiar with Bennett, and she was still performing in Your Arms Are Too Short To Box With God, Bennett¹s project sounded too good to pass up. The project turned out to be Dreamgirls, which had previews in Boston and opened on Broadway on December 21, 1981, at the Imperial Theatre. Her portrayal of Effie ³Melody² White, a role which she co-created, not only brought theatergoers to their feet for eight performances a week, but also garnered her a Tony Award for Best Actress in a Musical and her first GRAMMY® Award for Best R&B Female Vocalist.

Rema webb is currently in the Broadway Revival of The Color Purple.  Other Broadway credits include: Violet, The Lion King, The Book of Mormon and Ragtime. She recently starred in You¹re Standing In My Way: A New Song Cycle by William Finn and Deborah Abramson at Barrington Stage Company as well as A New Brain at Encores! Off-Center.  Favorite regional credits include:  The Colored Museum at the Huntington Theatre Company (Elliot Norton Award for Best Ensemble) and Being Alive (Westport Country Playhouse and Philadelphia Theatre Company). In 2014, she made her 54 Below solo concert debut with Children Will Listen. She is the founder/executive director of the On Broadway Performing Arts Training Program.

Julie James is an award-winning vocalist, theatre performer, voiceover artist and radio personality. Julie is the Program Director of Sirius XM Radio’s On Broadway and Metropolitan Opera Radio stations and hosts “Broadway Names with Julie James” where she takes her listeners on the town, backstage and into the studio for fun, lively conversations with the biggest and best of Broadway and beyond, including Hugh Jackman, Julie Andrews, Sting, Kristin Chenoweth, Rita Moreno, Neil Patrick Harris, Ben Vereen, Patti LuPone, Barry Manilow, Bernadette Peters, Daniel Radcliffe and many others. Julie has also performed internationally, recently playing sold-out engagements at New York City’s venerable 54 Below, singing the National Anthem at Fenway Park for a stadium of 34,000, has appeared with the Indianapolis Symphony Orchestra, Cincinnati Opera, Goodspeed Opera House, Long Wharf Theatre, Cincinnati Playhouse in the Park, St. Louis Repertory Theatre, in concert in Kazakhstan for its President, and headlined at New York’s famed Central Park Summerstage, Joe’s Pub at the Public Theatre and The Rainbow Room. Julie has hosted hundreds of events across America for clients including Saks 5th Avenue, Bloomingdale’s, Macy’s, and Lord & Taylor, and she was the exclusive spokeswoman for Tommy Hilfiger Woman for two years. Julie’s personality, stage presence and vocal style brought her to SiriusXM Radio where her voice is heard by millions each day as a host and on voiceovers, jingles and parody songs for various channels and “The Howard Stern Show.” Her ³Broadway Buzz² news updates air throughout the day on SiriusXm On Broadway channel 72, and ³Broadway Names with Julie James² premieres Saturdays 8 PM ET with encores Sun 12 PM, Wed 7 AM & Thu 9 PM.

Arts For All offers accessible artistic opportunities to children in the New York City area who face socio-economic, physical, or emotional barriers to exploring the arts.  Through Arts For All, professional artists work with youth organizations to build self-confidence, self-expression, teamwork, resilience, and creativity in children.  To learn more about Arts For All, please visit arts-for-all.org