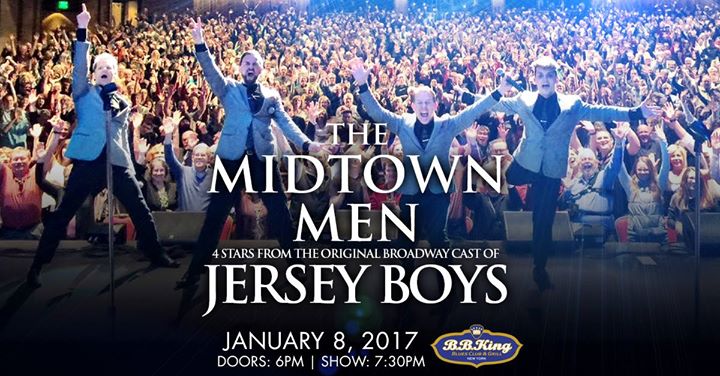 After 11 record-breaking years on Broadway, Jersey Boys will play their final performance on January 15, making it the 12th longest running show in Broadway history.  But that doesn’t mean the fun and excitement of the show will end, because 4 stars from the Original Broadway Cast are hard at work, bringing the greatest hits of the 60s to audiences nationwide as The Midtown Men.

Since 2010, Tony winner Christian Hoff, Michael Longoria, Daniel Reichard and Tony nominee J. Robert Spencer have been donning their rat-pack suits and hitting the road to share their love for the music and the groups of that iconic decade of rock ‘n roll, the 1960s.  They blend songs from The Beatles, The Zombies, The Rascals, Buffalo Springfield, Motown, the 4 Seasons and more into a high-energy evening of great music and slick choreography.  And fans can’t seem to get enough—now in their 7th full year of touring, The MidtownMen have done over 600 shows across the US, Canada and Beijing and have appeared as guest stars with over 31 major symphony orchestras.

What’s their secret?  Christian Hoff says, “We love those songs so much, they’re like gifts we bring to our audiences who love them too…it’s something we share together.”  Michael Longoria thinks, “It’s what the songs mean to people, for many it was the soundtrack of their young lives and we help them remember and relive great moments.”  Daniel Reichard muses, “We’re fortunate to be able to make a real connection with our audiences, we’re not playing roles, we’re just being ourselves and having a blast on stage—they see how much fun we’re having and want to join in.”  And finally J. Robert Spencer believes it’s more, “Something happens up there on stage, as we sing those gorgeous harmonies and put our hearts into the lyrics…we can feel it, it’s that magic thing, that rare thing that can’t be described but takes our performance to another level.  I feel it every night and it never gets old!”

Although each show is special, there’s nothing quite like coming home to NYC and appearing in midtown, right where their whole journey together began in 2005.  They’ll be at BB Kings on Sunday, January 8th at 7:30pm and are looking forward to welcoming fans and friends old and new.

Might there be some celebrities in the house?  The Midtown Men are known for their friendship and affiliation with some big names in the music business…Tommy James, Cousin Brucie and Stevie Van Zandt are on that list, and the guys have performed on stage with Rock Hall member Gene Cornish of The Rascals, LaLa Brooks of the Crystals, Shirley Austin Reeves of the Shirelles and Petula Clark.  “Be surprised,” says Daniel Reichard.
The Midtown Men at BB Kings
Sunday, January 8th at 7:30 PM
Tickets at www.bbkingblues.com