As the Fridge Hums, So Does Curse of the Starving Class at Signature 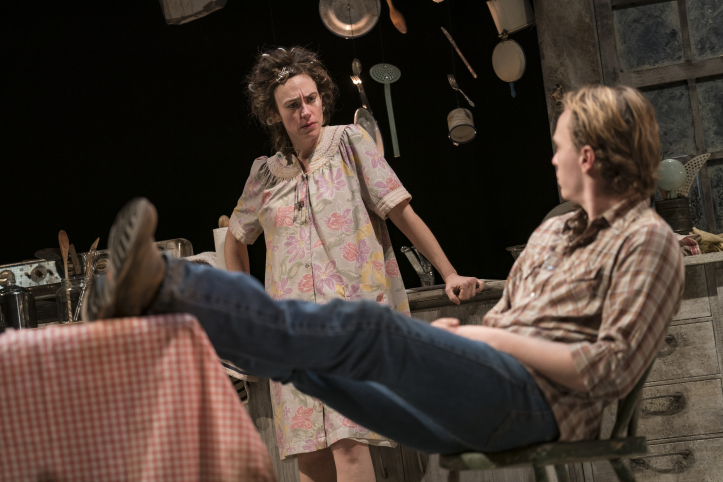 As the Fridge Hums, So Does Curse of the Starving Class at Signature

As the light streams in through the ruptured windows on to that dirty worn linoleum floor, the fragments of a violent world, mid-explosion, hang brilliantly in the dusty air. It becomes increasingly clear, as it gets more attention than almost anyone else in Sam Shepard’s iconic Curse of the Starving Class, the uncredited character that should get some secondary billing is that dirty old refrigerator that sits idly and emptily on the side lines. The clan of desperate family members that populate this mad household constantly shuffle over with a primal hunger, open the door, and peer inside with a hope for some much needed nutrition.

There are many a long conversations had with that inanimate object, begging and pleading it for some surprise sustenance, only to slam the door, frustrated with a world that has served them up basically nothing to speak of on that dirty stage floor at the Signature Theatre. In this Obie Award winning and much worshipped play (especially by all those young male thespians in acting schools), the mismatched clan fight for survival, clawing at the skin of everyone around hoping to find salvation and keep the malnutrition of their mortal souls far far away, maybe buried out somewhere in that desert amongst those foul smelling artichokes. Their empty stomachs are filled to the brim with that satirical western poetry that made playwright Shepard (True West, Fool For Love) and this Curse so starvingly iconic. The cast, as fractured and beaten down as can be, rise up to that heightened level of itchy ease, performing at such an intense level of alertness to detail, that, for the most part, that first explosion of their worldview rings solid and clear. All, but not only, thanks to the scenic design by Julian Crouch (Broadway’s Hedwig…), exacting lighting by Natasha Katz (Broadway’s The Prom), and solid sound and original music by Rob Milburn & Michael Bodeen (Broadway’s No Man’s Land). For that, I’m hoping you aren’t one of those latecomers, showing up past the hour and missing the blast.

As directed with precision and skill by Terry Kinney (RTC’s The Price), that dirty cowboy boot sharpness of tongue stomps slyly forward, even with the overly long first act (that combined the original Act 1 with Act 2 of 3). It’s wilily and wild this wife Ella, donning the perfectly attuned and muddy costuming by Sarah J. Holden (LCT’s The Babylon Line) and portrayed sharply by Maggie Siff (TFANA’s Taming of the Shrew) in full mud mask and curlers, walking out into the shambles of what her hurricane husband, Weston, portrayed with full frightening force by David Warshofsky (Broadway’s Carousel) had brought forth earlier this morning. “He’s the one who broke it down – he can clean it up then“. It’s chaos concretely arranged and left for her dimwitted son, Wesley, played with lethargic fire by Gilles Geary (Atlantic’s Hangmen) to take care of, and her daughter, Emma, intelligently and manically portrayed by the firecracker Lizzy Declement (MCC’s Lost Girls) to basically ignore and defend against.  Their initial first scene personifies all that is Shepard, with his sly and hungry poetic bite, gnawing at the darkly agonizing and destructive energy that lives rotting in their open starved mouths. “Talk is cheap” Emma says defensively, babbling on and on, too distastefully dark to swallow, regardless of how starving they actually are. But it’s not food they are hungry for, beyond that incredible piss and binge scene both by the impressively game Geary. It’s some other farfetched idea of gaining love, support, and security that will fill up their empty souls and save them from oblivion.  That is in short supply in the opening and closing of the Shepard’s fridge door. And it’s an exhausting long drive, leaving you in need of a good dead-like nap on a hard surface.  “I see“, is the only thing a lawyer man can say to all that.

The dual character-playing cast members, Andrew Rothenberg (Steppenwolf’s Mizlansky/Zilinsky) and Esau Pritchett (Pioneer’s The Lion in Winter) show up at that door-less entrance, separately and then together. At one point, the two very fine actors, playing two very different men offer a way out or something more akin to a smash and grab drive-by; sellers should beware, and at another, to slam the jail door shut with a painful punch by thugs carrying death in their fire balled fists. These are two sets of two to be wary of in Sam Shepard’s branding world of lost boys as men driving around in the desert dying of thirst while being drunk as a skunk,. His brand of poetry resonates on every surface within these fragmented four walls, even as Malcolm, hilariously portrayed by the wise Flora Diaz (59E59’s Playing God) stands aghast at what lays before her in that maggot infested sheep farm fiasco, with real life animals, courtesy of William Berloni (Broadway’s The Ferryman) crying softly at the horror that surrounds them. The talk and cries are about escape and glorified rebirth somewhere far away, like all of Shepard’s characters, but the road is dusty and full of dangerous potholes, and the family blood filled with poison. Signature’s Curse falters in spirit in the final act, flaying around a bit too much in the madness, losing its clear minded drunken authenticity, but lucky for us, this in not a civilized household to behold, but one filled with fierce actors as tom cats, willing to bring the eagle down, scratching at the flying carnivore’s underbelly when captured and caught in its sharp talons, even if it means death for the tom cat as well.  Just ask Weston. He’ll explain, that is if he remembers to finish his tale before running for his life.