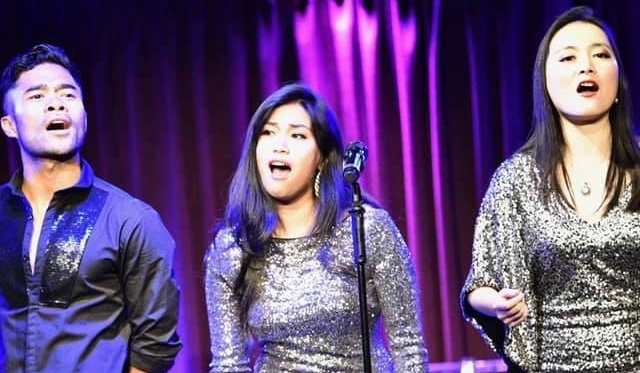 15 year old Violet Vang– “In My Dreams” from Anastasia, The Green Room’s own Kea Chan– “Adagio”, Bobby Deleon – “Instrumental Medley” and Anthony Salvador Lewis with “From Russia With Love.”

The show started out with 13 year old Step Forward Entertainment actress, Mya Laman, sister of Parkland shooting survivor Kyle Laman.
A  moment in time can change the life forever of young students, families and communities…Parkland, Sandy Hook, Columbine and Santa Fe….these are only a few!

The universal problems of mental health issues and gun abuse resulting in Children Killing Children! have become a daily occurrence. This epidemic of violence plaguing our society brings the specter of mental illness to the forefront…an illness that can be intangible and illusive until triggered.

Justin Senense with “I Chose Right” from Baby, Justin Senense and Mao with on “One Second and a Million Miles” from The Bridges of Madison County. The amazing Xiaoqing (Mao) Zhang not only sings gloriously but plays an exquisite violin. Last Mao on “My Heart Will Go On” from Titanic.

The wonderful Kea Chan and Justin Senense came back to the stage for the romantic “Sun and Moon” and Kea Chan joined Violet Vang on “I Still Believe”. This was truly a well done medley of Miss Saigon.

The adorable and witty Akoni Steinmann was the Master of Ceremonies and did such a fabulous job looking hotter than hell. He introduced the producer of the show was Marya Coburn. Marya was a successful film and TV actress with Frank Sinatra, Jon Voight, Robert Conrad, Yul Brenner and more. She was a dancer with Bob Fosse and was in the show Sweet Charity. Kissed by Elvis Presley in the film “Stay Away Joe”, Marya discovered singing late in life. Since it was her birthday she decided to entertain us all with “New York New York.” The finale was all singing the song “Thank-you For The Music.”

This night was magical and highly entertaining with performers you are sure to hear of performing on Broadway sooner than later.

Suzanna BowlingJune 7, 2022
Read More
Scroll for more
Tap
Jackie Evancho Wows at Feinsteins/ 54 Below Again and Will Be Performing With Michael Feinstein
Fiddler: A Miracle of Miracles With Lin-Manuel Miranda, Harvey Fierstein, Harold Prince and More