Assassins States Everybody’s Got The Right To Be Happy or Do They? 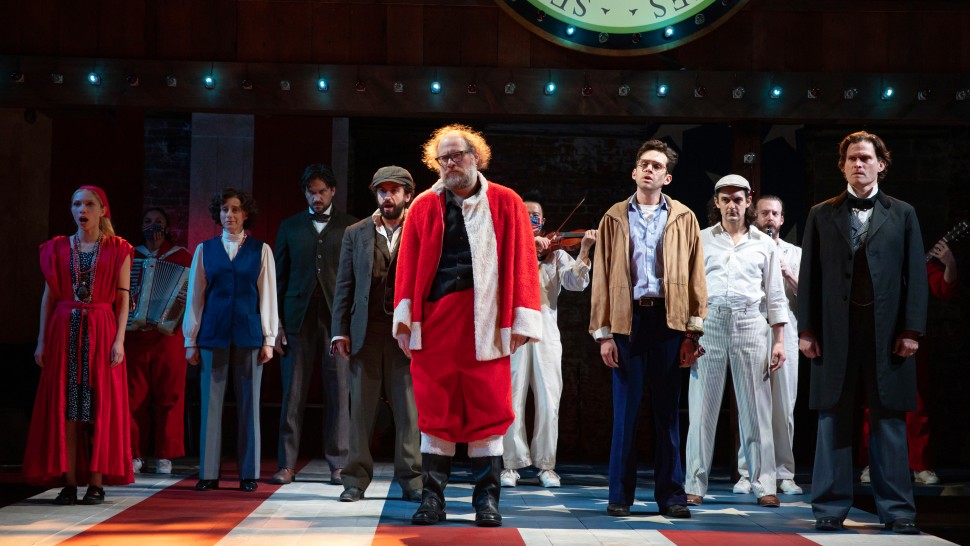 Assassins States Everybody’s Got The Right To Be Happy or Do They?

Before it even opened Classic Stage Company announced that it had added three more weeks of performances to its highly anticipated production of Stephen Sondheim and John Weidman’s Assassins, directed by CSC’s Tony Award-winning artistic director, John Doyle.

As I entered the theatre I was struck with the fact the scaffolding was missing. This version of Sondheim’s dark, Tony award winning musical is star-studded. They all wear American flag masks when not performing. Does this symbolize that we have lost our voices? It would have been nice if they had mic’d the actors, so we could really hear their magnificent voices. Alas they did not.

“I did it to make people listen.”

The stage is an American flag, Emma Goldman (Bianca Horn) carries a folded American flag with stripes of blood streaming over it. The President’s Seal is like a roulette table to the which the President at hand lands on. John Doyle’s Americana set is as always minimalistic, but this time it works.

Assassins starts off with John Wilkes Booth (Steven Pasquale) and ends with Lee Harvey Oswald (Ethan Slater), who in this production is also “The Balladeer.” Altogether, nine men and women have tried to either kill or assassinate a President of the United States and this is their stories. Here we meet Leon Czolgosz (a heartbroken Brandon Uranowitz), John Hinckley (a understated and withdrawn Adam Chanler-Berat), Charles Guiteau (a hysterical Will Swenson), Giuseppe Zangara (a wild-eyed Wesley Taylor), Samuel Byck (a winning Andy Grotelueschen), Lynette “Squeaky” Fromme (a perfect Tavi Gevinson), and Sara Jane Moore (a comedic Judy Kuhn). Though these actors are all fabulous singers, what is spectacular here is the scene work. The acting stands out.

Let them curse me to hell
Leave it to history to tell:
What I did, I did well
And I did it for my country

Assassins at this time is alarmingly haunting as this show asks you where is the line between happiness and becoming unhinged is drawn? This country is so discontented that the cracks are becoming visible and wider on a daily bases. Is the next assassin just a breath away? The ensemble wear prison jumpsuits; does this mean we are all entrapped in a prison of our own making?

Slater is a standout playing acoustic guitar and mandolin. As the Balladeer, he is the sardonic voice of the piece. As Oswald he is the outsider wanting in. As Booth urges him to join this select group, we see the slow change that can turn a man into an instant to killer.

Pasquale gives Booth dignity and a quiet strength, but it is Will Swenson’s tick-filled, on the verge of a nervous breakdown Guiteau, that gives the show its energy.

Kudos to Eddie Cooper as “The Proprietor” and the hard working ensemble; Brad Giovanine, Whit K. Lee, Rob Morrison and Katrina Yaukey, who not only play instruments, but act and sing well.

Assassins has much to say and it is depressing, insightful and thought provoking.