BeBe Winans released several albums, first with his sister CeCe Winans, and later as a solo artist. BeBe and CeCe recorded five albums together including self-titled BeBe & CeCe Winans, Heaven, Different Lifestyles, First Christmas and Relationships. In 1995, BeBe and CeCe split up to pursue solo careers. But in 2009 they did the album “Still” together. On it was the song “Close to You,” which won a Dove award in 2010 in the category of Urban Recorded Song. 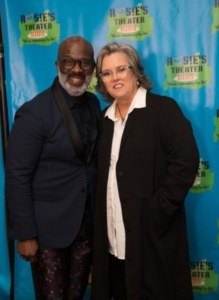 At the Rosies’s Theatre Kids, Bebe let us know a little bit about his new musical Born For This, coming to Broadway

Detroit teenagers BeBe and Cece Winans experience the ultimate in culture shock when they leave the comfort and safety of their already-famous family to join Jim and Tammy Faye Bakker’s Praise The Lord Network in Pineville, North Carolina. The televangelist couple becomes an unlikely surrogate family as the siblings rapidly rise to television stardom. After the duo achieve unexpected fame with a PTL performance of a remake of the hit song, “Love Lift Us Up (Where We Belong),” they encounter the seductive lure of celebrity and they establish life-long friendship with rising pop star Whitney Houston. Ultimately, BeBe must learn to reconcile the temptations of stardom and fortune with the things he ultimately values more.

RTKids was launched in 2003 at PS 51, a Title I public school bordering on the theater district where students would walk by Broadway theaters daily, and never have the opportunity to go inside. Rosie noticed this, and thought it was, “…like living in Hawaii, and never having access to the beach.” Together with Rosie, Artistic and Executive Director Lori Klinger developed PS Broadway – RTKids foundational program. In 2003, all 40 fifth graders at PS 51 participated in 15 weeks of singing and dancing training, and every single fifth grader went to see their first Broadway show – all free of charge.

Over the years since its debut, RTKids has blossomed into much more than simply a song and dance venue. The dedication and inspiration of its expert staff and generosity of its guest Broadway professionals have yielded truly remarkable results. Today, RTKids services include performing arts instruction, life skills development, academic tutoring, and a home-away-from-home environment that is safe and nurturing.