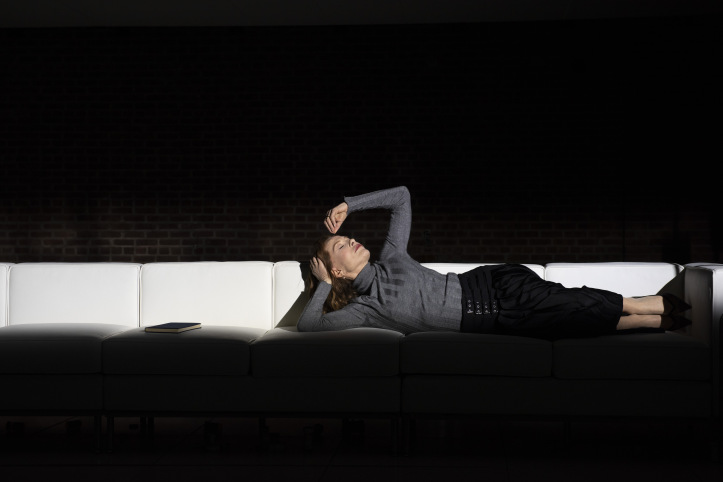 The Mother, embodied by the formidable Isabelle Huppert (Sydney Theatre/Lincoln Center Festival’s The Maids), the absolute main reason to see this at the Atlantic Theater Company, sits impatiently regale waiting for her husband to arrive home from an extended day at the office. Sitting like the queen she truly is, rubbing her eyes in exhaustion, she breathes forth no warmth but the stillness is intense and the energy tight. Dinner has long passed, and if we can take any hint of the temperature in the room this evening from the extended length of that long sleek white sofa she languishes on, the air is cold and crisp. Watching her pick at her nails and fiddle with her elegant turtleneck sweater and skirt, courtesy of costume designer Anita Yavich (Broadway’s Fool for Love), we wait with her, for the play to begin, and for The Father, perfectly and impatiently played by Chris Noth (Broadway’s The Best Man) to arrive home. That distance, between him and his wife of 25 years will not be easily broached this night, not the first time round, nor the second. Strangely repelling, it’s a game of repetition, for this woman who knows how to poke stealthily at her husband with passive force, and for playwright Florian Zeller’s (The Truth) who has a few ideas of his own in how this woman’s mind is functioning and fracturing before our very eyes.

With a wide bombastic direction, Trip Cullman (Broadway’s Lobby Hero), tackles The Mother with as fearless a devotion to the material as Huppert, diving in to the maternal focus with boundless energy. “I thought she was getting better“, says Roth’s character hinting at something that is never fully explained, but seemingly unnecessary. The play is loosely and casually part of a three play package that Zeller has written covering three aspects of family, all expanding within the strong translations by Christopher Hampton (Les Liaisons Dangereuses). The Father (Le Père) won the Molière Award for Best Play, premiered in September 2012 at the Théâtre Hébertot, Paris. It was first to arrive to New York, opening on Broadway back in 2016, and winning a Tony Award for Best New Play and a Best Actor award for Frank Langella. The Son just recently opened in London a few months ago at the Kiln Theatre, which my fellow junkie luckily saw on our last theatre trip (click here for a rundown of what we saw). From what I understand, the three plays are not linearly and familially connected, but from the two that I have seen, a splitting apart of the mind into difficult and sharp pieces is what binds them, whether it is from age and Alzheimer’s, as it was for Langella, or a Oedipal crisis and an unnamed mental disorder torturing the soul of Huppert.

Her angst, to put it lightly, swirls somewhere around abandonment and desperate mind cracking need.  Her husband, she believes, is having an affair, not late night meetings. Nor is he really going away for a seminar in Buffalo. These accusations slide out of Huppert’s mouth like venom stinging and stabbing relentlessly at Noth’s character, utilizing her accent to make even the simplest things sound absurd, pressing her husband’s buttons with the ease of a passive aggressive pro, tossing familiar questions over and over again hoping each cut just a bit deeper than the last. It’s compelling writing, that first jabbing game, and the second round stings even better with her vagueness. This construct wavers, pulling us in and pushing us out, never really letting up or giving a clue what is reality based, if there is any to be found within the expansive always altering setting.

It’s really about The Son, her son, who never calls and never visits, played lethargically and interestingly by Justin Smith (MCC’s Yen)  Until he does visit, or does he? We are as suspicious as Noth, perplexed by the notion stated casually by The Mother. He has come home in the middle of the night and mustn’t be disturbed as he is sleeping in his bedroom. He needs his rest, she says, and we sit along side Noth on that couch with the telling, but unsure what is true. Is it a manipulation to mess with her husband’s determination to leave, or is it her mind messing with her own need and ours? That is until he enters, but then, when he enters again, we don’t know what to think.  Is The Mother, both the play and the character, lost somewhere in her head, thinking of ways to complicate her reality, conjuring up the thing that she wishes for with Oedipal compulsion more than anything else? Her attachment is overly desperate, bordering on inappropriate and uncomfortable, but once again, is this really happening or just a figment of her cracking mind?

The Son has come home because of a late night fight with his girlfriend. “Did she cheat on you?” asks The Mother along with a few other pointed and difficult to comprehend questions that a mother should never ask or assume. The Girl, portrayed wisely by Odessa Young (MCC’s Days of Rage), arrives in earnest, needing to speak to The Son but is greeted with resistance from his mother. As with all aspects of this twisted psycho drama, The Girl transcends the obvious, morphing into others as symbolic and dense as the drama that is unfolding. She is either The Son’s girlfriend, or maybe The Father’s. She also might be The Daughter, or The Mother herself, disconnecting and reconnecting with a vengeance to her younger more together self. The couch disappears, opening the space up to reveal the details of a troubled mind, courtesy of scenic designer Mark Wendland (Broadway’s Six Degrees of Separation), lighting by Ben Stanton (Broadway’s Fun Home), and sound design by Fitz Patton (Broadway’s Choir Boy). In many ways the play feels like it should be claustrophobic rather than expanding into blackness and a void, but the choice is made and pounded in with determination like a lobotomy in action.

But does it all add up to something profound or engaging? Huppert and company are working hard, trying their best to formulate and transcend the depth of her despair with hopes that her descent reverberates more than just simple psychosis on display. It flails out, wide and jarring, especially when the brave Huppert starts spiraling as wildly as her mind. Her intent is powerful, but somehow strangle distancing, never really bringing us into the fear that resides inside her fractured mind. It is horrifying to watch, as it scatters around the hard floor like the pills that are popped and dropped, but the play never grabs hold to our hearts beyond a level of praise for the fearless work of a French warrior queen demolishing herself and others as she falls back into her hospital bed.  The ending messes with our head, making us question all. Was it all a dream or a hallucination? You tell me, as I gave up trying to figure it out midway through.