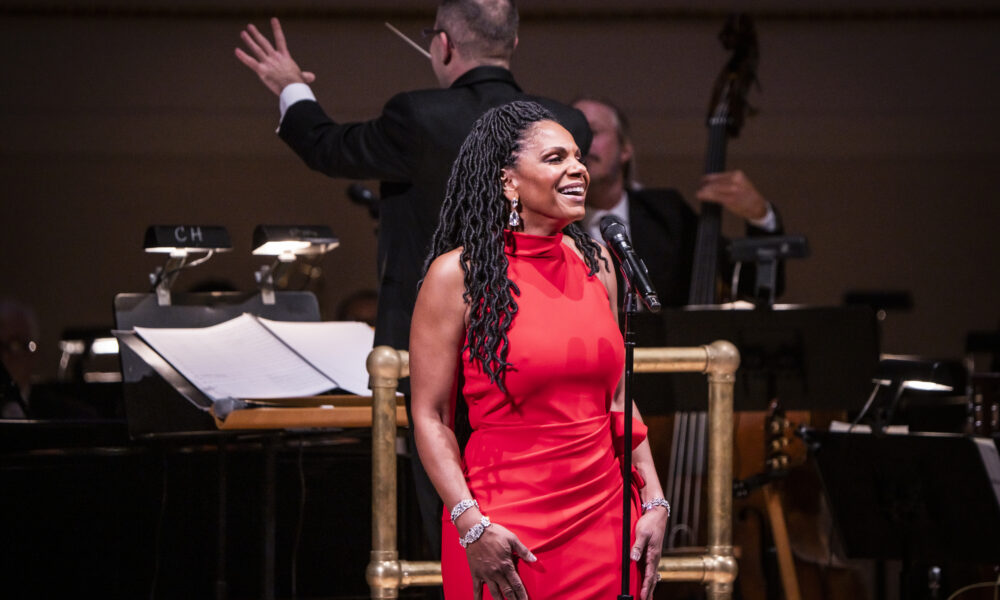 On December 3rd, I was invited to review Audra McDonald at Carnegie Hall on December 3rd. I had never felt so privileged. The show had Ms. McDonald feeling sentimental, as she started out with a rousing “I Am What I Am” from La Cage in a beautiful orange dress that fit her to a tee. 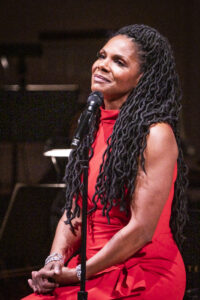 With Andy Einhorn, her music director and conductor at the helm, Jeremy Jordan on piano, Gene Lewin on drums and Mark Vanderpoel on bass, as well as a full orchestra, the dreamy, enchanting “Pure Imagination” from Willy Wonka and the Chocolate Factory sent the audience into a magical world where Audra was the tour guide. 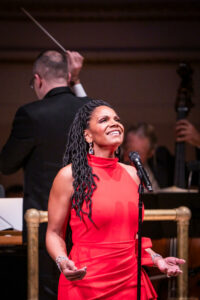 A phenomenal version of “Mister Snow” reminded the audience why she won a Tony Award as Carrie Pipperidge in Carousel. It may have been 28 years ago, but she made it seem like yesterday. 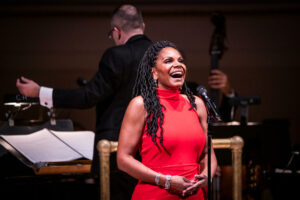 One of the best things in an Audra McDonald concert is she gives you glimpses of her personal life. She becomes more real as she talks candidly about her family, upbringing and children. In the next song, “Cornet Man” from Funny Girl, she sang the song at 14 for a competition. She asks the audience “why didn’t anyone tell me this song was inappropriate? ”I think the answer to that was because she sings it better than Streisand. 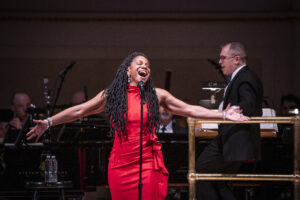 Channeling the Streisand repertoire with “Sleepin Bee” from House of Flowers, had Audra telling us how she loved and admired Diahann Carroll, who was a trailblazer and her role model. 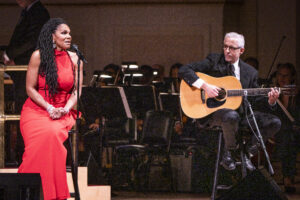 In community theatre Audra had a small role in Annie Get Your Gun. Feeling sentimental, she held us in the palm of her hand with “Moonshine Lullaby.” 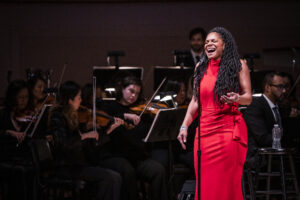 One of Audra’s mentors was Barbara Cook. Barbara gave her the key to solve her stage fright and in turn Audra treated us to a glorious “Will He Like Me” from She Loves Me, Cook’s signature song from that show. 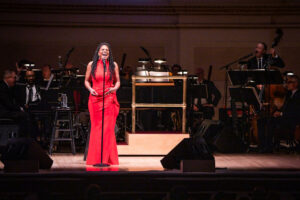 Performing in Porgy and Bess, she won her fifth Tony Award her iconic performance of “Summertime,” soared throughout the Hall and resonated with pathos and effortlessness vocal prowess. 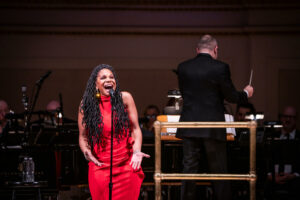 It was the closing of the first act that was the most astounding part of the concert. I never expected “Rose’s Turn” from Gypsy to come out of Audra’s mouth. The song was so full of emotion that all I could think of was I really want to see a black version of this show. Now this is a revival that could give The Music Man a run for its money.

The second act started with “Gorgeous” from The Apple Tree. My only negative comment is that Audra did not change her dress.

In honor of Duke Ellington’s first concert hall appearance being on that very same stage, the haunting “(In My) Solitude,” made famous by Billie Holiday, came back to life.

Feeling that black women have to be better than everyone else, an impassioned “Being Good Isn’t Good Enough” from Hallelujah, Baby! starring another one of her heroes, Leslie Uggams, Ms. McDonald made her case. 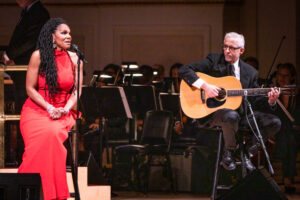 From there one of her favorite childhood songs “”Bein’ Green” by the Muppets also brought home Audra’s point of view.

“Carefully Taught/ Carefully Listen ” from Rodgers and Hammerstein’s South Pacific and From Stephen Sondheim’s Into The Woods, had McDonald state; “Isn’t the world crazy? It’s a mess! We’re not as far along as we should be” and she’d be right.

Next was the song that I was waiting for all night “Can’t Stop Talking About Him” penned by and sung originally by Betty Hutton. It was pure bliss.

Then, she went back to the Streisand song book, singing “Before The Parade Passes By” from Funny Girl in which she played a small role in her theatre back home in Fresno, Ca.

Sondheim’s “With So Little to Be Sure Of” from Anyone Can Whistle had a passionate, lustrous quality to it, especially giving the time we are living in.

Anna Wintour asked Audra to sing “Cabaret” at a party she was throwing at the Metropolitan Museum. It was a song Audra never wanted to touch. She and Andy Einhorn created a version that is completely Audra. It is darker, haunting and a more intense version.

For her encores, an impassioned “Home” from The Wiz, which was rapturous, and the duet “Get Happy/Happy Days are Here Again,” sung with Andy Einhorn, which I am sure made his year. 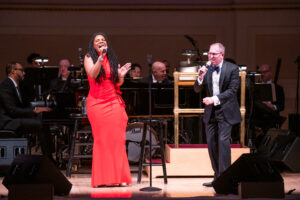 Seeing Emmy, Grammy and Tony-winner Audra McDonald, you are watching a national treasure not to be missed. Her vocals are effortlessness and all I could think of was an exquisite, rare champagne; sparkling, bubbly and astounding. 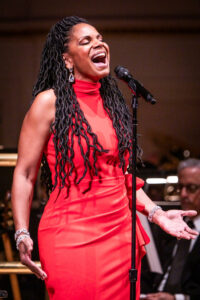