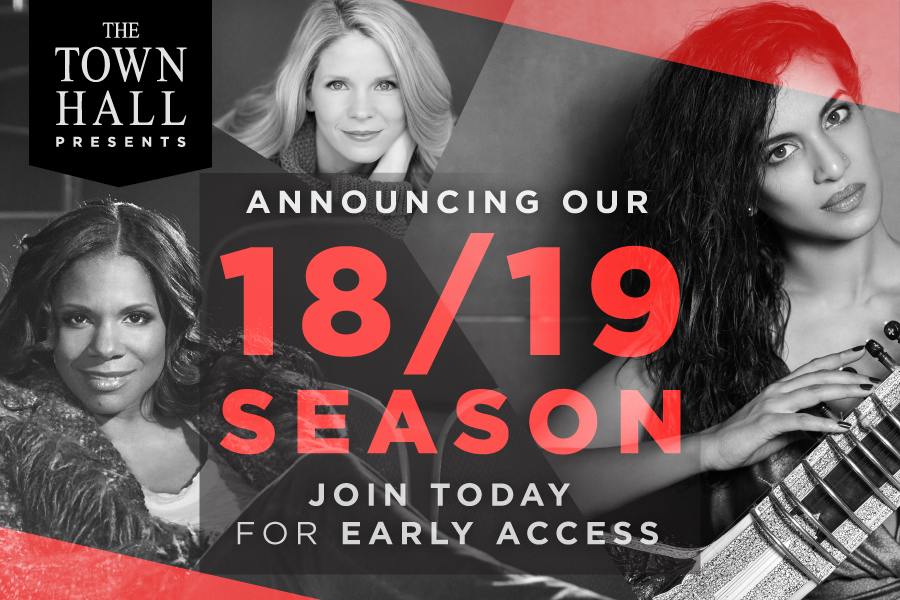 The internationally acclaimed Broadway @ concert series hosted and music directed by Sirius XM Radio Star Seth Rudetsky is finally landing smack dab in the middle of Broadway itself this fall. Producer Mark Cortale has announced the premiere season of “Broadway @ The Town Hall” in New York City, kicking-off with legendary six-time Tony Award winner Audra McDonald on November 12. The superstar lineup will continue with Kelli O’Hara, six-time Tony nominee and Tony Award winner for the revival of “The King And I” on January 14, 2019, and Jeremy Jordan, Tony Award nominee for “Newsies” and star of TV’s “Supergirl” & “Smash” on March 11, 2019. The Broadway @ Series was first launched at Provincetown’s Art House theater in 2011 by Cortale and Rudetsky and now makes its home in more than a dozen major venues worldwide.  For tickets and information, visit www.thetownhall.org or call (212) 997-6661.

Audra McDonald (performing November 12 at The Town Hall) holds the record for more Tony Best Performance wins than any other actor in history, and is the only person to win all four acting categories. She became a three-time Tony Award winner by the age of 28 for her performances in “Carousel,” “Master Class,” and “Ragtime,” placing her alongside Shirley Booth, Gwen Verdon and Zero Mostel by accomplishing this feat within five years. She won her fourth in 2004 for her role in “A Raisin in the Sun”, a role she reprised for a 2008 television adaptation, earning her a second Emmy Award nomination. On June 10, 2012, McDonald scored her fifth Tony Award win for her portrayal of Bess in Broadway’s “The Gershwin’s Porgy and Bess” thus tying a record held by Angela Lansbury and Julie Harris for most Tony Awards won by an actor. In the 2014 Broadway season, she made history by winning her sixth Tony Award for her role as Billie Holiday in “Lady Day at Emerson’s Bar and Grill.” She also maintains her ties to classical repertoire with an active concert and recording career, performing song cycles and operas as well as concerts throughout the US. Audra’s many television appearances include four seasons as Naomi Bennett in “Private Practice,” as well as “Homicide: Life on the Street,” “Law & Order: SVU,” “Having Our Say,” “Mister Sterling,” “The Bedford Diaries,” “Kidnapped,” the TV remake of the musical “Annie,” and HBO’s “Wit” with Emma Thompson and more recently as a cast member of “The Good Wife.” In December 2013 Audra won critical acclaim for her performance as the Mother Abbess in NBC’s live telecast of “The Sound of Music” with Carrie Underwood. As the host of the PBS series “Live From Lincoln Center,” she won her first Primetime Emmy Award in 2015. That same year she was named one of Time magazine’s 100 most influential people of 2015 and received a 2015 National Medal of Arts – America’s highest honor for achievement in the arts – from President Barack Obama. In 2018, she joins the cast of “The Good Fight” for the second season of the CBS All Access original drama series. Her film roles include “Cradle Will Rock,” “Object of My Affection,” “It Runs in the Family,” “Best Thief in the World,” and “Seven Servants.” Ms. McDonald returned to the Broadway stage in 2016 with director George C. Wolfe and dancer/choreographer Savion Glover in the musical “Shuffle Along, Or, The Making of the Musical Sensation of 1921 and All That Followed,” a new retelling of an original musical by Eubie Blake and Noble Sissle, for which she was nominated for a Tony Award. On the concert stage, she has sung with virtually every major American orchestra, and internationally with Théâtre du Châtelet in Paris, as well as with the London Symphony Orchestra and Berlin Philharmonic. Of Audra McDonald’s many roles, she notes that her favorites are the ones performed offstage: passionate advocate for equal rights and homeless youth, wife to actor Will Swenson, and mother to her children.

Kelli O’Hara (performing January 14, 2019 at The Town Hall) recently received her first Emmy Award nomination for Outstanding Actress In A Short Form Comedy of Drama Series for her portrayal of Katie Bonner in the hit web series “The Accidental Wolf”. On Broadway, Kelli’s portrayal of Anna Leonowens in the critically acclaimed revival of “The King and I” garnered her the 2015 Tony Award for Best Leading Actress in a Musical, along with Grammy, Drama League and Outer Critics nominations. She then reprised her Tony Winning role while making her West End debut this past summer for which The Times hailed her as “Broadway musical’s undisputed queen” adding “Kelli O’Hara does not just play Anna, she owns the part”. Kelli was also nominated for the Tony Award, Drama Desk Award, and Outer Critics Circle Award for her Broadway performances in “The Bridges of Madison County,” “Nice Work If You Can Get It,” “South Pacific,” “The Pajama Game,” and was nominated for the Tony and Drama Desk Award for her leading role in “The Light in the Piazza.” She has also starred on Broadway in “Sweet Smell of Success,” “Follies,” “Dracula,” and “Jekyll & Hyde.” Her Regional and Off Broadway credits include “Far From Heaven” at Playwrights Horizons and WTF, “King Lear” at the Public Theater, “Bells Are Ringing” at City Center Encores, “Sunday in the Park with George” for Reprise, and “My Life With Albertine” at Playwrights Horizons. Kelli received a 2018 Webby nomination for her role in the hit web-series thriller “The Accidental Wolf” and appears in the second season of Netflix’s series “13 Reasons Why.” Other film and television credits include “Sex & The City 2,” Martin Scorsese’s “The Key to Reserva,” Showtime’s “Master of Sex,” CBS All Access’ “The Good Fight,” “Blue Bloods,” “Alexander Hamilton,” “N3mbers,” and the animated series “Car Talk.” In 2015, Kelli made her Metropolitan Opera debut in “The Merry Widow.”  She returned to the opera this past spring as Despina in “Così fan tutte.” Her concerts have gained international acclaim, spanning from New York’s Carnegie Hall all the way to Tokyo. She is a frequent performer on PBS’s live telecasts and the Kennedy Center Honors. Along with two Grammy Award nominations, her solo albums, Always and Wonder in the World are available on Ghostlight Records. Upcoming, Kelli will star in the Broadway revival of “Kiss Me Kate” in Spring 2019.

Jeremy Jordan (performing March 11, 2019 at The Town Hall) first appeared on Broadway in the musical “Rock of Ages.”  He then won the starring role of Tony in Broadway’s revival of “West Side Story” followed by the initial production of “Bonnie & Clyde” in Sarasota, Florida, starring opposite Laura Osnes. This was followed by his first feature film, “Joyful Noise,” opposite Dolly Parton and Queen Latifah. Todd Graff, who wrote and directed the film, decided to cast him in the movie after coincidentally attending Jeremy’s very first performance as the lead in “Rock of Ages.” In the fall of 2011, Jeremy was cast as Jack Kelly in Disney’s world premiere production of “Newsies” at Paper Mill Playhouse in New Jersey. He played Jack at night, and during the day rehearsed the Broadway production of “Bonnie & Clyde,” after which he returned to “Newsies” to star in its new run on Broadway, which earned him critical raves and a Tony nomination as Best Actor in a Musical for this star-making role – and a Grammy nomination for the “Newsies” cast album. While starring in “Newsies” on Broadway at night, he appeared regularly on NBC’s hit series “Smash.” Jeremy also starred in the film adaptation of “The Last 5 Years,” opposite Oscar and Tony nominee, Anna Kendrick, from the cult musical from Jason Robert Brown was directed by Richard LaGravenese. Jeremy also starred as real life “Peter Pan” writer J.M. Barrie in the stage musical version of “Finding Neverland,” directed by Tony-winner Diane Paulus at Boston’s legendary A.R.T. theatre. This year, Jeremy reprised his role as Jack Kelly in Disney’s live filmed stage production of “Newsies” which opened in movie theaters this past February. He also appears as the voice of Varian in Disney Channel’s new animated series, “Tangled,” based on the 2010 hit movie.  Currently, Jeremy stars in The CW drama “Supergirl” opposite Melissa Benoist. This fall he will star on Broadway opposite “Scandal” star Kerry Washington in the drama “American Son.”

Seth Rudetsky is the afternoon host on Sirius/XM Satellite Radio’s “On Broadway” as well as the host of Seth Speaks on Sirius/XM Stars. As an author, he penned  “My Awesome/Awful Popularity Plan” and the sequel “The Rise And Fall Of A Theater Geek” (Random House) as well as three volumes of “Seth’s Broadway Diary” featuring inside scoop and hilarious stories from all of the stars he’s worked with. He co-wrote and co-starred in “Disaster!” (NY TIMES “critics pick”) recently on Broadway. “Disaster!” also premiered to rave reviews in London’s West End. In June 2016, he and his husband, James Wesley,  co-produced a recording of “What The World Needs Now” with stars like Idina Menzel, Lin-Manuel Miranda, Carole King, Audra McDonald which went to number one on iTunes and raised $100,000 for the Orlando shooting victims (and is still raising money. Buy it!). On Inauguration Day 2017, he and James started “Concert For America”, a monthly series around the country helping 5 non-profits being hurt by the current administration. Stars such as Kelli O’Hara, Barry Manilow, Stephanie Mills, Vanessa Williams, Andy Cohen and more have performed and you can watch the next one streamed live on ConcertsForAmerica.com.

Mark Cortale (Producer) is currently co-producing the new musical “Midnight At The Never Get” by Mark Sonnenblick opening at The York Theatre this fall.  He produced “Deconstructing Patti” on Broadway last September at the Nederlander Theatre with Broadway Cares/Equity Fights AIDS starring Patti LuPone and Seth Rudetsky. He created the Broadway @ concert series in 2011 at The Art House in Provincetown where he serves as Producing Artistic Director. The series, featuring creative partner Seth Rudetsky as music director and host, had its eighth season this past summer and guest artists over the years have included Patti LuPone, Audra McDonald, Sutton Foster, Megan Mulllally, Christine Ebersole and Jessie Mueller. The Broadway @ series also premiered in 2013 in New Orleans, in Australia (Sydney & Melbourne) with Megan Mullally and in London’s West End with Patti LuPone at the Leicester Square Theater. The series has since travelled to cities that include Chicago @ The Steppenwolf, Beverly Hills @ The Wallis, Fort Lauderdale @ The Parker Playhouse, San Francisco @ The Herbst Theater and Scottsdale @ Scottsdale Center for the Arts.  In the 2018/19 the series will launch in Boston @ the Huntington Theatre with Chita Rivera and Seth Rudetsky. Mark produced the feature film “Varla Jean and the Mushroomheads” and also produces the singing string quartet Well-Strung, which he co-founded. Info at www.markcortalepresents.com

Suzanna BowlingNovember 26, 2021
Read More
Scroll for more
Tap
Theatre and Music News With Melissa Errico, Jim Brochu, Eliane Elias, Daniel J. Watts and Twelve Angry Men (Woman)
This One’s For The Girls and  Sistas: The Musical Have Been Selected to Perform the National Anthem for the New York Yankees