SPEAKproductions, in association with TBD Productions & Martian Entertainment, announced that the film adaptation of Michael John LaChiusa’s musical Hello Again has launched with the June 2nd release of “Beyond the Moon.”  This original single debut’s in the film and was written especially for Tony, Grammy, and Emmy Award-winning singer and actress Audra McDonald. The single was released on iTunes, Apple Music, Spotify and all major digital retailers. The release of this new song will be followed by a summer of film festival screenings & regional theatre-hosted sneak peek events featuring Hello Again. 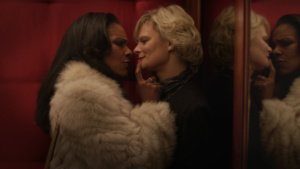 Hello Again chases 10 fleeting love affairs across 10 periods in New York City history. The pursued becomes pursuer as they spin through 10 daisy-chained vignettes that come together in 1 soulful circle. Originally produced by Lincoln Center Theatre in 1994, Hello Again was nominated for 8 Drama Desks.”Beyond the Moon,” is set in 2002, when Audra McDonald’s character transforms into a “Pop Diva.” It would actually make more sense if this was the song sung during the disco era.

Last summer, Broadway Records launched the Broadway for Orlando initiative (in partnership with creators Seth Rudetsky and James Wesley) as a response to the Pulse nightclub mass shooting. The all-star benefit single, “What the World Needs Now is Love” has been downloaded more than 70k times and raised over $100k to date and counting, with 100% of the proceeds benefitting the GLBT Center of Central Florida. Additionally, the song reached No. 1 on the iTunes song chart in its first week of release and broke into the Billboard Top 100 with no commercial radio play. To learn more, visit BroadwayRecords.com.