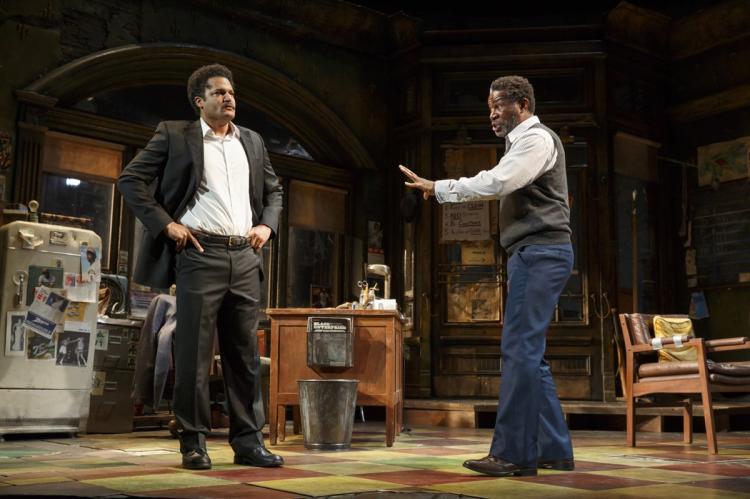 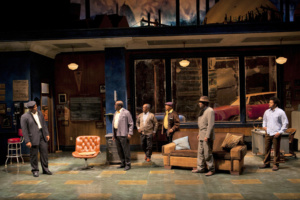 August Wilson is dominating both on the big screen and Broadway with Fences and Jitney. It took until 2017 to bring Jitney to Broadway. It was the only one of August Wilson’s “Century Cycle” plays not to have made it to the “Great White Way.” Written in 1982, Jitney was meant to have been done before King Headly II and Radio Golf. 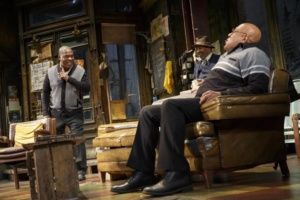 We are set in the post-civil rights era, in the 1970s, where regular taxi’s would not travel to the Pittsburgh Hill District. The residents turned to each other to get around in what was known as Jitney’s stations. In one such rundown station, fabulously designed by David Gallo, owner Becker (John Douglas Thompson), is trying to keep his men together who are hustling to make a living. 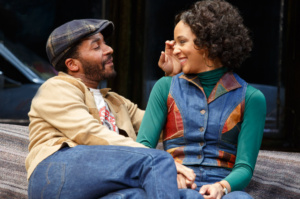 Here Doub (Keith Randolph Smith), Becker’s second-in-command, adds a roundedness. This self-aware Korean War vet does what he “needs” not what he “wants.” “Too many black folks get them mixed up,” he states to Youngblood (André Holland), who is a Vietnam Vet trying to make a better life for himself, Rena (Carra Patterson) and his son Jessie. Youngblood and Turnbo (Michael Potts) argue because Turnbo the jitney’s regular gossip, doesn’t know when to keep his mouth shut. Turnbo speaks without always knowing the truth. He is a firecracker about to go off as we learn he once pointed a gun at a man over a 50 cent debt.

Fielding ( a fabulous Anthony Chisholm), is your conventional drunk, complete with the staggering gait of a hopeless alcoholic. Once a proud tailor the bottle has become his God.

Rounding off the regulars at the jitney are bookie Shealy (Harvy Blanks) and regular customer Philmore (Ray Anthony Thomas). 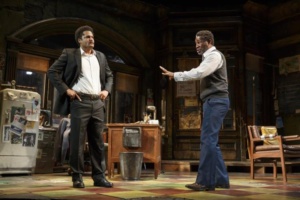 The Jitney drivers learn their worn out building is to be demolished for gentrification, as Becker’s son Booster (Brandon J. Dirden), returns from prison. Booster at 19 was incarcerated because his lover, a white woman, lied claiming she had been raped, so as not to upset her father. Becker never visited his son in prison as he is profoundly disappointed in his son, whom he gave up everything up. Booster ‘s mother who attended the trial died of a broken heart when she learned her son was to be killed.

Booster has come to his father’s Jitney station after 20 years to make amends. Both have reasons to argue, but his father refuses to forgive and disowns him. In the meantime Becker decides to fight for his Jitney Station and tells his men “The people got a right, if you hauling them around in your car, to expect the brakes to work.”

When Becker gets killed in a freak accident Booster finds his way to make amends by taking his father’s place.

The cast is uniformly terrific. Thompson makes Becker kind hearted and relatable. His monologue to Booster explaining his past humiliations, the swallowing of his pride, knowing his dream for his son would become the dignity he gave away is devastating. Booster explains he killed not to feel “shrunken in size,” the way he saw his father become. Both sides of an argument, that can never be fixed.

Director Ruben Santiago-Hudson, who starred in Seven Guitars and Gem of the Ocean on Broadway, understands the poignant melody of Wilson’s open book on a world most of us did not know, until he prolifically told us. Father’s and sons, workers who strive to make ends meet and time passing us by are relatable, no matter the color, the gender or financial position you come from.