Avenue Q Takes The Debates To Another Level

Avenue Q Takes The Debates To Another Level 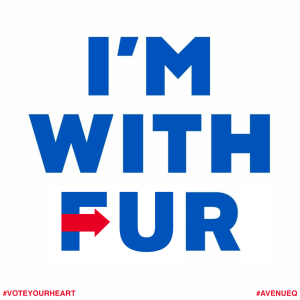 If you’re one of those people who feels as though this Presidential election campaign has been a “joke” or “no laughing matter” or somewhere in between, take heart: the long-running, Tony Award-winning musical comedy AVENUE Q (now in its 13th year in NYC) is entering the race, as it were, with the addition of a Hillary Clinton and Donald Trump puppet to its acting company of people and puppets.

The Clinton and Trump puppets made their debut in a Town Hall-style debate – a preview to the actual first scheduled debate between Mrs. Clinton and Mr. Trump – on Monday, September 26 at New World Stages (340 W. 50 St.) at noon.

The Clinton and Trump puppets will be performed by AVENUE Q alumni and husband and wife Maggie Lakis and Rob McClure.

Resident director Jen Bender notes that the storyline in AVENUE Q – about a bunch of 20 somethings in NYC just out of college, trying to find their purpose in life — itself addresses, in its smart, savvy and hilarious way, issues of concern to voters in the 2016 election:  race, unemployment, religion and LGBT matters.  These matters are expected to be addressed in AVENUE Q’s Town Hall debate on September 26, along with issues of hand-size, hair and emails.

Now at New World Stages and the winner of 3 Tony Awards, AVENUE Q has music and lyrics by Robert Lopez and Jeff Marx, book by Jeff Whitty, and is directed by Jason Moore.

To watch this hysterical debate https://drive.google.com/file/d/0B_0nIdQf6CYobGs1d25QeUZWZ1E/view?usp=sharing