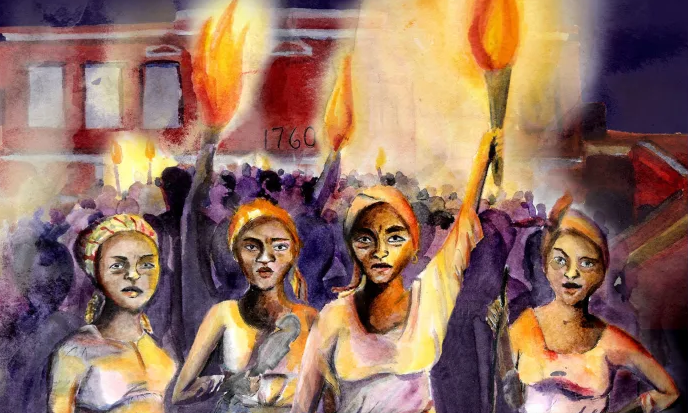 Short films are making progressive waves this past year, especially one project by artist and filmmaker Angela Golden Bryan.

The documentary “Fireburn the Documentary” has won several rounds of applause and awards including the Chicago Indie Film Awards. Produced by Bryan, the film is a powerful profile on the human rights violations that occurred during the bloody Labor Revolt of 1878 on the Island of St. Croix – current day US Virgin Islands.

The documentary follows Bryan’s Amazon #1 Bestseller book “Fireburn the Screenplay” published in 2018 and it will air on PBS in 2022. It makes its global debut at various film festivals this year and was just awarded Best Documentary Short at the Chicago Indie Film Awards.

“Fireburn”is the forgotten story that centers around the event known as the Fireburn, which took place post-emancipation. The documentary looks at the inhumane treatment of the freed laborers, female empowerment, colonialism and the consequences of suppressing a person’s basic human rights. Filmed on the island of St. Croix, “Fireburn”is designed as a tool for cultural preservation and education. Storytellers, historians and artists share their knowledge of the event in order for audiences to gain a holistic view of the Fireburn. The documentary helps bring the story to a global stage and new audiences. The story was immortalized on March 31, 2018 in a sculpture in Copenhagen, and made world news headlines – as the first public monument of a black woman. The monumental, award-winning public sculpture, “I am Queen Mary” of the rebel queen who led the revolt, has been immortalized into a Danish history book’s cover by Forlaget Columbus.

“Fireburn” has also been selected in two categories at the New Haven International Film Festival – Best Documentary Short and Black Lives Matter, African American History & Social Justice.The New Haven International Film Festival is Connecticut Film Festival’s culminating event showcasing a cadre of handpicked films in half a dozen venues throughout the state. Chicago Indie Film Awards is an IMDb qualifying monthly and annual festival, which celebrates and recognizes Independent indie filmmakers from all over the world. It celebrates its fifth year this year.

To produce the screenplay, the award-winning author and actress Angela Golden Bryan, who grew up on the island of St. Croix, US Virgin Islands, brought together a team of acclaimed experts in the film industry. The screenplay was directed by the award-winning director and cinematographer Joel Fendelman, who has written, produced and directed many narrative and documentary films, such as “Man on Fire” (which received an IDA Award). Actor, Marjorie Tingle, a Meisner trained actress and producer of numerous independent films, and producer, Steven James Tingus, one of the nation’s leading experts, advocates, and thought leaders for disability, aging, and health, and human services policy, and programs rounds out the team.

“Having grown up on the island of St. Croix, in the US Virgin Islands, hearing stories about Queen Mary and the Fireburn, I always knew that to be a part of our island’s history. Later in life, the event took on a new meaning for me when I learned that Fireburn was also a part of my family history; my great-great-great-grandmother, Moriah, was a teenager and took care of her younger brother and sister while her parents fought in the Fireburn,” explains Bryan. “The story of the Fireburn is a tale of our humanity and is still relevant today. It is my hope that this documentary will serve as a tool to understand the people and culture of the Virgin Islands while educating those unfamiliar with our history,” notes Bryan.

Bryan’s nonprofit, The Fireburn Foundation, Inc., received a major grant to assist with producing the documentary. In a statement from the Community Foundation of the Virgin Islands, from whom the grant was given, Vice President and Director of Grants and Programs, Anna Wheatley Scarbriel stated, “Our goal is to bolster local humanities entities, as well as to enrich the lives of people throughout the territory through humanities, education, lifelong learning, and public humanities programming.”

Bryan commented, “My team and I are grateful for the grant, as well as all the support from our generous donors. We could not have taken this project from an idea to the screen without their help. Now we are able to share a pivotal event in the history of the US Virgin Islands with a new generation of islanders, as well as many others beyond the Territories. We are thrilled that it is being seen all over the world and look forward to bringing it back to the Virgin Islands as an award-winning documentary.”

RossDecember 4, 2022
Read More
Scroll for more
Tap
Celebrity Casino Scandals That Left Everyone Speechless
What to Watch in The New Year: February 25