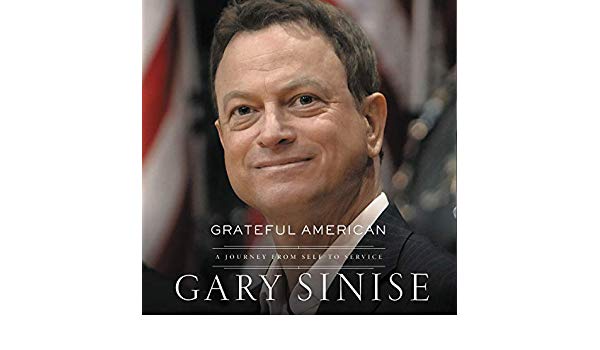 Grateful American: A Journey From Self to Service 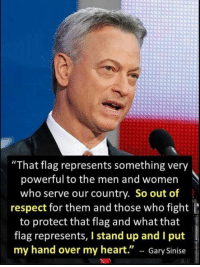 In his new memoir, Grateful American: A Journey from Self to Service, (Thomas Nelson, February 12, 2019), Gary Sinise chronicles his never-before-told journey, from aimless teen to an actor/director with a purpose: a mission to support and raise awareness for the men and women who selflessly put themselves in harm’s way in service to our country.

Grateful American sets the stage for his passion for veterans, as the reader learns Sinise comes from a long line of servicemen: his grandfather fought in the historic Battle of the Argonne Forest in World War I, his uncles served in Europe and Japan during World War II, and his dad was a Navy photographer during the Korean War. The military ties don’t end with Sinise’s family. After he got married in 1975, he got to know the many U.S. Army veterans in his wife’s family as well.

However, serving one’s country wasn’t in Sinise’s mind as a wild kid growing up in the suburbs of Chicago in the 60s and 70s. He was more interested in having fun and getting into trouble than studying and doing schoolwork. When he was in high school, at the height of the Vietnam War, Sinise admits he was oblivious to much of what was happening to our young men and women in South East Asia.

He stumbled into acting by way of a school production of “West Side Story,” and found he was drawn into this creative and exciting vocation. Within a few years, in a church basement in Chicago, Sinise and some friends put together a ground-breaking new theater company, the Steppenwolf Theatre, which launched his acting career along with those of John Malkovich, Joan Allen, Laurie Metcalf and several other well-known acting personalities. Soon after, TV and film parts regularly came Sinise’s way before his life would forever be changed during and after portraying Lieutenant Dan in Forrest Gump. Since Forrest Gump, his life has evolved and encompasses so much more than what he’s done on the stage and screen.

Sinise has witnessed firsthand the extraordinary skill and dedication of our service members and his mission and passion are to shine a light on those who serve and defend, volunteering to lay down their lives so we can have the freedom to make something real and good of our own lives.

In 2011, he established the Gary Sinise Foundation, whose mission is to serve, honor and raise funds for America’s defenders, veterans, first responders, their families and those in need. Sinise works tirelessly on behalf of those who serve our country and protect our cities, entertaining more than half a million troops and first responders at home and abroad, playing bass guitar with his Lt. Dan Band.

The message Sinise wants to deliver in Grateful American is clear: He loves his country and he’s forever grateful to be an American, thankful for the blessings he’s received as a citizen. He understands where his freedom comes from and he does not take for granted the sacrifices of those who provide it. He hopes that Grateful American will help ensure America’s defenders and their families are never forgotten.

As he looks back on his life’s journey and sees anew the ups and downs, he feels fortunate that he went from caring about not too much more than his own career to becoming a passionate advocate of our nation’s defenders.

“It’s my hope that as I share these stories from my life, you will be entertained and maybe even inspired too – empowered to overcome obstacles, embrace gratitude, and engage in service above self,” states Sinise.

Gary Sinise is an Oscar-nominated actor and winner of an Emmy, a Golden Globe, and two Screen Actors Guild awards, and has been honored with a star on the Hollywood Walk of Fame, all while advocating for America’s defenders for nearly 40 years. For his service work, Gary has been presented with numerous humanitarian awards including the Bob Hope Award for Excellence in Entertainment from the Congressional Medal of Honor Society, the George Catlett Marshall Medal from the Association of the US Army, and the Spirit of Hope Award by the Department of Defense. He was named an honorary Chief Petty Officer  by the United States Navy, was pinned as an honorary Marine, and received the Sylvanus Thayer Award from the United States Military Academy at West Point, given to a civilian “whose character, service, and achievements reflect the ideals prized by the U.S. Military Academy.” He’s also the recipient of the Presidential Citizens Medal, the second-highest civilian honor awarded by the President of the United States to citizens for “exemplary deeds performed in service of the nation.”